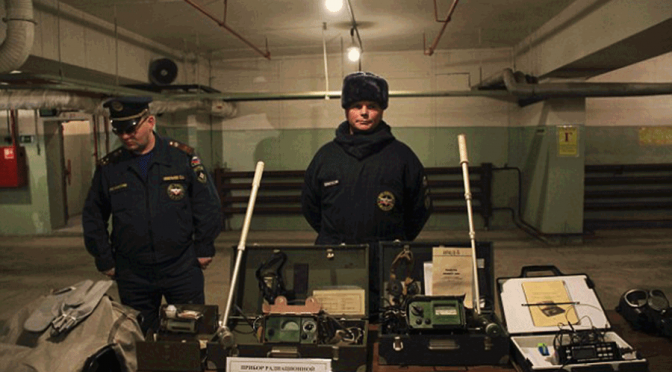 An estimated 40 million Russians who are living in major cities across the Russian Federation will be participating in several nuclear attack drills after the US State Department spokesman John Kirby recently threatens Russia with “more body bags and attacks on Russian cities” should it continue helping the Syrians recover the cities of Aleppo and Raqqa from the US  funded terrorists.

Prior to John Kirby’s veiled threat, Russian missiles reportedly destroyed a bunker killing 30 intelligence officers from the US, Israeli and Qatar, for having directly involved in sabotaging the Syrian ceasefire.

Since last year, new nuclear bunkers were constructed, and old ones were renovated after the decision to help Syria was arrived. Now, the Russians are declaring that they are more than ready to deal with the nuclear treat.
Moscow prepared for possible nuclear attack – EMERCOM
30.09.2016

Representatives for the Russian Emergency Situations Ministry (EMERCOM) said that all bomb shelters and underground shelters in Moscow meant for the evacuation of people in case of a nuclear attack or other emergencies, “were prepared and will be able to accommodate the entire population of the capital.”
“As a result of the introduction of new approaches to civil defense, an inventory of underground facilities of the city was conducted. The Moscow underground facilities will be able to protect 100% of the population of the city,” deputy head of EMERCOM of Russia in Moscow, Andrei Mishchenko said.
He also added that the department takes urgent measures to enhance civil defense. The department updates the legal framework and modernizes control and alarm systems.
“We work to improve the public training system in the field of civil defense,” he said.
Noteworthy, the Ministry for Communications, the Finance Ministry, the Ministry for Industry, the Russian State Reserve and the Bank of Russia earlier took part in a sudden inspection of the Russian army. The above-mentioned departments worked in a “war-time” mode to test their systems for a possible war.
The Washington Free Beacon wrote citing US intelligence that Russia suddenly started building super bunkers. According to the publication, “dozens” of such bunkers are being built across the country.
Experts point out that their creation is associated with the introduction of a prospective integrated automated command and control system of the fifth generation into Russian missile forces.
To crown it all, according to services responsible for the organization of civil defense and emergency response, a special program was launched in Moscow in 2015, within the scope of which bomb shelters and fallout shelters were built or renewed in every district of the Russian capital.
Two years ago, Russia conducted drills to repulse a nuclear attack on Moscow and strike a massive retaliatory blow. Reportedly, President Putin used the “nuclear suitcase” during the drills.
In 2015, both Russian and American generals said for the first time that a nuclear war between the United States and Russia was close like never before.
“Despite the fact that the majority of Russians, including Muscovites, do not know where bomb shelters are located in their neighborhoods, there is a list of addresses of bomb shelters. The shelters are now maintained accordingly to give people an opportunity to go through several days of a man-made emergency or a nuclear attack,” EMERCOM officials said.
Read article in Russian
Is the US State Department abusing the defensive stance of the BRICS Alliance in spite of its aggressive rhetorics projecting its waning geopolitical relevance?
Are the Americans ready for a nuclear exchange with Russia and its equally capable nuclear armed allies?
We are asking these direct questions because the Russians are not sugarcoating their positions anymore.
Refusing diplomacy on Syria may result in full-scale war — Russian Foreign Ministry 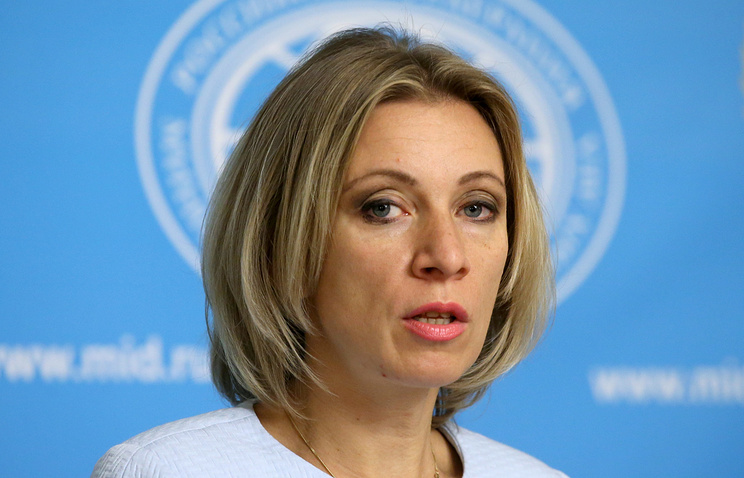 © Artyom Korotayev/TASS
MOSCOW, October 2. /TASS/. The refusal of a diplomatic settlement in Syria may result in a full-scale war which will lead to “tectonic shifts” in the whole region, Russian Foreign Ministry’s official spokeswoman Maria Zakharova said in the “Right To Know” program on TVTs channel.
“Lobby in US is now really muddying the waters and not allowing to reach an agreement,” Zakharova said. “There logic is — ‘why do we need diplomacy, UN, talks, international law, why do we need any commitments on the international arena, when there is power and the right of a powerful one, and there are our own national laws which may stand above other laws and be strengthened by methods of resolving a problem by power. We already know this logic, there is nothing new about it. It usually ends with one thing — a full-scale war,” she added.
The spokeswoman declined to answer the question on Russia’s possible reaction in case the United States uses force against Syria. “I cannot speculate on what will happen if… This is the task of experts. May task is to explain why it is so important to stay in the framework of the agreements,” she said. “If US starts a direct aggression against Damascus and the Syrian army, this will lead to scary tectonic shifts not only on the territory of Syria, but in the whole region as well,” she noted.
US State Secretary John Kerry earlier said that Washington may freeze cooperation on Syria with Moscow.
http://tass.com/world/903565
That freeze in diplomatic relationship between both camps has already occurred.

Russian President Vladimir Putin on Monday suspended a treaty with Washington on cleaning up weapons-grade plutonium, signaling he is willing to use nuclear disarmament as a new bargaining chip in disputes with the United States over Ukraine and Syria.
Starting in the last years of the Cold War, Russia and the United States signed a series of accords to reduce the size of their nuclear arsenals, agreements that have so far survived intact despite a souring of U.S.-Russian relations under Putin.
But on Monday, Putin issued a decree suspending an agreement, concluded in 2000, which bound the two sides to dispose of surplus plutonium originally intended for use in nuclear weapons.
The Kremlin said it was taking that action in response to unfriendly acts by Washington. It made the announcement shortly before Washington said it was suspending talks with Russia on trying to end the violence in Syria.
http://www.reuters.com/article/us-russia-usa-nuclear-idUSKCN1230YN
The United States announced on Monday its decision to suspend the bilateral dialogue with Russia on the resolution of the conflict in Syria amid continuing violence in the Arab country.
Read more: https://sputniknews.com/middleeast/20161004/1045975715/us-russia-syria-cooperation.html
As far as the Syrian and Russian governments are concerned, they are fighting the good war in Aleppo and they have no reason to stop with their military advances against the US Daesh terrorists.

Final Assault to Free Aleppo from US Terrorists Launched
Both Russia and the United States have officially suspended their diplomatic ties in Syria. This action was preceded by the treachery of the US regarding the recently agreed upon Syrian ceasefire costing the Syrian government 100 lives in Deir Ezzur, afterwhich, US warplanes were also reported to have destroyed two critical bridges in the province, and wounded 50 more civilians in multiple attacks recently.
In response, the Syrian military have resumed an all-out offensive against the US terrorists who are still holding 275,000 civilians hostage in Aleppo.

In a show of support, China disclosed its radar technology that could defeat the US stealth technology. 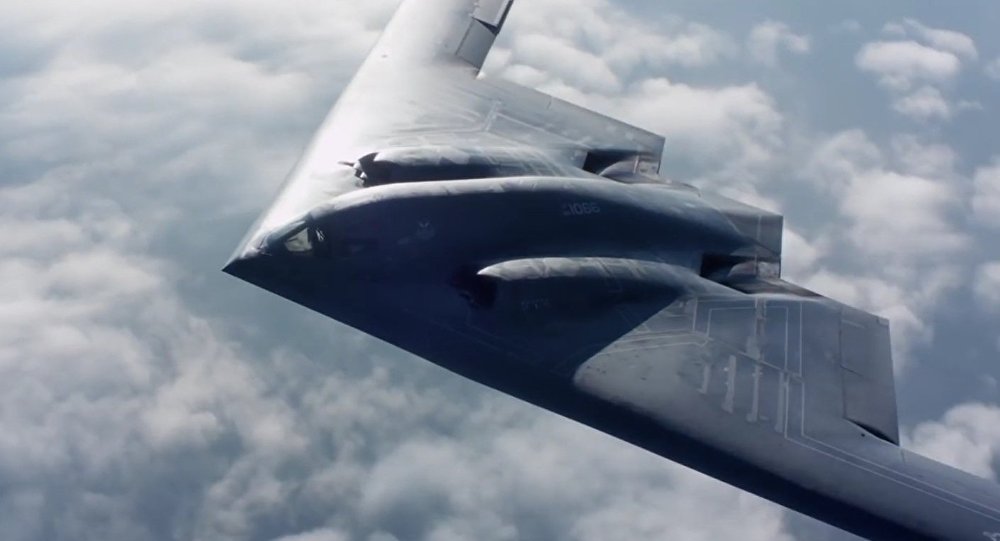 Japan also assures everyone that it is not dependent on the United States as far as its dealings with Russia.

The Japanese PM Shinzo Abe claimed that his country’s relations with Russia do not depend on the US.

Abe explained Barack Obama the stance of his country before Vladimir Putin’s visit. Speaking in the Parliament, Shinzo Abe said that he did not consult the US on every item of the future negotiations with Vladimir Putin, but reported main thoughts to the US authorities.

‘We used to speak about Putin’s visiting Japan in December with Obama, and then at a meeting with Biden in New York in September I explained our ideas on how we want to carry out Putin’s visit to Japan and advance talks on reaching a peace treaty,’ Abe claimed.

According to him, Japan won’t be guided by the US home policy demands during negotiations with Russia. ‘If Japan can hold talks only accommodating oneself to the US home policy, a partner will find out that it’s easier to negotiate with the US rather than with such country as well as hold Russia-Japan talks,’ the PM stated.

These Russian nuclear drills come at a time when the West financial system is about to crash completely, and we all know that the only accessible exit for the Khazarian warfreaks is war.
The only way they can get out of this mess is another false flag operation that is of greater magnitude than the WTC 911. This time they will be accusing one of the BRICS Alliance as the perpetrator.
So, they will continue navigating along this line until a peace oriented leadership occupies the White House, and all Khazarian criminals are completely neutralized, or eliminated.