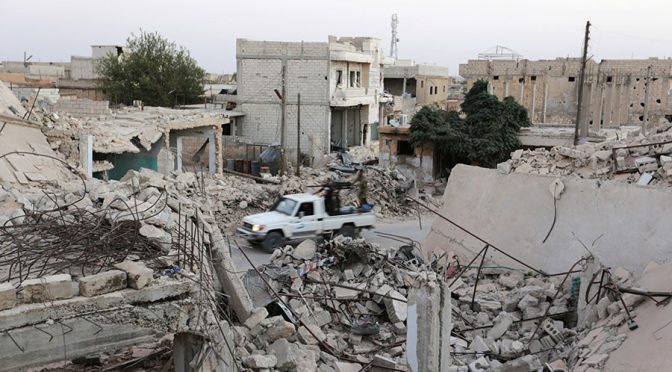 At least three Western governments are effectively providing air cover for Daesh terrorists which continue to terrorize the government held areas in Aleppo.

The  borderline between the Western armed forces and its Daesh terrorists is as clear as the desert sky during a massive sandstorm.
Hundreds of civilians continue to suffer from the indiscriminate firing and bombing by “moderate rebels,” and the inaccurate reporting of the pseudo-humanitarian groups…
https://www.youtube.com/watch?v=CwhgfIZ4F8Q

“A compilation of evidence from RT of airstrikes in western Aleppo that are killing and injuring civilians in government-controlled parts of the city on an almost daily basis. These are the facts that receive less attention from human rights organizations than strikes on the eastern part of the city.”

About 200,000 out of more than a million Aleppo residents are being used as human shield which complicates the recovery operations.
Worse, some of the young residents are forcefully conscripted into the terror movement.

Terrorists in Aleppo are ‘forcefully’ enrolling 14-year-old conscripts amid a lack of reinforcements in the city’s east, according to Russia’s General Staff.

During a press briefing, the chief of the main operations department of Russia’s General Staff, Sergey Rudskoy, said that terrorists in the war-ravaged city have started a new wave of mobilization, which includes teenagers.

“The leaders of militant groups continue to hide behind inexperienced fighters launching a new wave of mobilization in east Aleppo and enroll teenagers at the age of 14 years,” Rudskoy said.

He added that fighters from the UN-designated terrorist group Jabhat al-Nusra forcefully enrolled around 1,000 people. The youngsters are being used to try and break the blockade of east Aleppo, staged by Syrian government forces, according to the official.

“They [terrorists] tried to break up the blockade seeking cover behind those inexperienced fighters. The youngsters mobilized against their will refuse to complete their tasks and desert en-masse, having become subject to reprisals. These actions have caused protests from parents and relatives of the enrolled teenagers.”

However, according to Rudskoy any such sign of discontent has faced a brutal response from terrorists. Aleppo, once Syria’s largest city is now divided into an eastern part, held by rebel forces and terrorists, and the government-controlled areas.