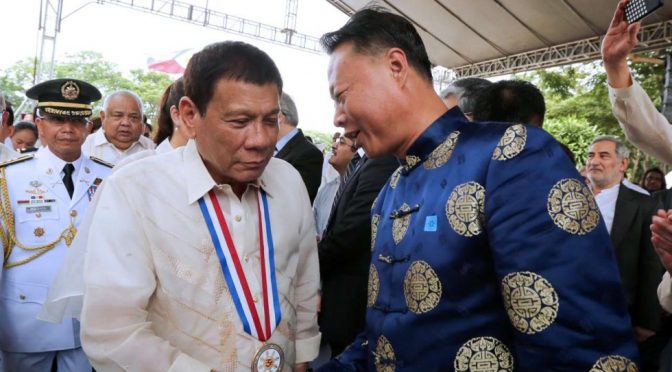 In what could be a pivotal point in Southeast Asia’s history, the Duterte government is considering a joint military exercise with China, and Russia.

This statement came as he flies en route to Beijing for an official state visit – his first outside the ASEAN Community, and barely days after he announced that the recent US-Philippine military exercise will be the last.
https://www.youtube.com/watch?v=sqfrnUL_eXA

President Rodrigo Duterte has said the Philippines is willing to hold joint military exercises with China and Russia, while reiterating that he will no longer allow war games with longtime ally the United States.

Duterte made the remarks in a TV interview broadcast on Monday, ahead of a four-day visit to Beijing aimed at improving ties that soured over competing claims in the resource-rich South China Sea.

Asked if he would consider joint military drills with China or Russia, Duterte told Hong Kong-based Phoenix Television: “Yes, I will. I have given enough time for the Americans to play with the Filipino soldiers.”

Duterte also repeated he would no longer allow joint exercises with the US, the Philippines’ main defence ally and supplier of military hardware.

https://www.youtube.com/watch?v=77qewVIdo3c
Yes, they can always try to pin Duterte down, but the West will only suffer from their own medicine.
The number of constructive bilateral engagements already happening between China and the Philippines, and the increasing frequency of positive press releases between the two sides only indicate that the Philippines and the whole ASEAN Community are taking a bolder step of rejecting any foreign attempts at dividing the Asian nations against each other.
Although the Chinese mouthpiece Global Times was a bit cautious earlier, it is now prodding the Xi Jinping’s government to “reciprocate Duterte’s overture” adding that Duterte’s visit to China “would have been unimaginable three months ago when the Philippines, as an initiator of the South China Sea arbitration and a key pivot of the US strategy of rebalance to the Asia-Pacific.”

Duterte’s straightforward way of speaking and acting has made a deep impression on the world. He extended the olive branch to China soon after taking office, making China the first country outside ASEAN for an official visit and speaking publicly in favor of Beijing. Now it’s China’s turn to receive his olive branch.

Global Times understood that China needs “to grasp this major strategic opportunity brought by the Duterte administration” and should “make more efforts to facilitate the turnaround of the bilateral relationship” which “suffered an overall retreat during Aquino’s rule.”
Said mouthpiece underscores the left-wing ideological orientation of Duterte which should enable him to “resist pressure from domestic pro-US forces.”
We are expecting that the Philippine and Chinese governments will sign an accord about the proper conduct in the West Philippine Sea, which should involve the resumption of energy exploration and the controlled harvesting of marine life in the area.

China vowed on Thursday to help with the Philippines’ economic and social development ahead of the upcoming visit of Philippine President Rodrigo Duterte.

This is in parallel to the reopening of the Chinese market for Philippine agricultural products, and the projected increase of Chinese tourists into the Philippines now that the travel ban has been lifted, and where infrastructure support projects are already in the pipeline.
https://www.youtube.com/watch?v=rnGQADpb8R4
Above all of these economic engagements, Duterte has recently announced that his government is also open to military exercise and supply of arms from either the Chinese, or Russian side. His China visit today is with high probability “the point of no return, ” he said 3 weeks ago.

Philippines President Rodrigo Duterte has reiterated his intention to distance his country from the US, its former colonial master, saying he is about to pass “the point of no return” with the US.

“I am about to cross the Rubicon between me and the US,” the controversial Pacific leader told reporters, without elaborating.

Duterte reiterated that the Philippines would seek closer ties with Russia and China, the two nations that challenged American ambition for global leadership. But, he added, the ties with the US would not be broken completely, only driven to a point that would allow Manila to have an independent policy.

The Philippines’ shift towards the BRICS Alliance, and away from the US hegemony, raises pressure on Japan’s Abe government, and that of South Korea, to reject any new US military facility in their respective countries as their peoples are protesting about recently.
This should create more panic to the US State Department, which is already struggling with their misadventures in Syria, Iraq and Libya.
Duterte will be visiting Japan and Russia soon.
Barely a century ago, the Asian elders were duped to lend their historical assets to the West, or suffer a devastating blow from the latter’s military might. Now, Asia has officially come of age, and this time with a sizable military force that is more than capable to protect itself from any foreign aggressor.
https://www.youtube.com/watch?v=Agg2kBxlfUM
“The clouds are fading away. The sun is rising over the horizon and will shine beautifully on the new chapter of China-Philippine bilateral relations.” – Zhao Jianhua, Chinese Ambassador to the Philippines.
Change has come.