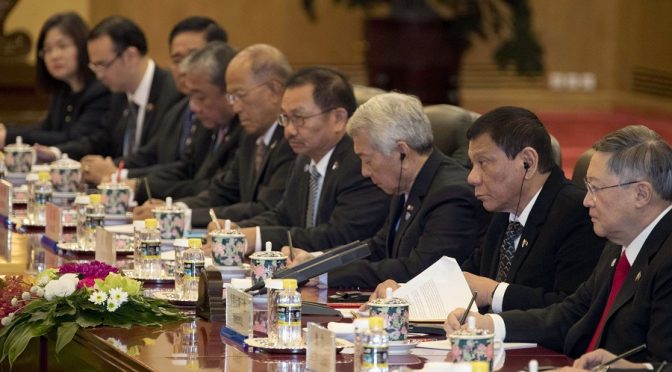 It is very obvious by now that the US State Department could not contain their being shocked at the tectonic shift of the Philippine government’s foreign policy, veering away from the United States for the first time in 70 years, and into its regional neighbor, China.

The notorious State Department Spox John kirby is seeking an explanation, which may not be forthcoming simply because this is nothing personal.
https://www.youtube.com/watch?v=p4EhKC_ZJl0
These warmongers need to realize that the rest of the world are tired of wars and regional conflicts. We prefer building bridges literally and metaphorically.
Duterte Visit Reaps 17 Deals & Contracts

“At the ceremony right now, we have witnessed the signing of 13 bilateral cooperation agreements that cover a wide range of areas from the production capacity, to infrastructure, to agriculture, to quarantine inspection and also one between coast guards. The signing of cooperation agreement between coast guards of the two countries means that the two countries will start cooperation on maritime affairs,” Vice Foreign Minister Liu Zhenmin said.
https://www.youtube.com/watch?v=Hmkc71pRYJU
The documents, signed in the middle of Duterte’s four-day state visit to China included:

Liu said that the two Presidents had in-depth discussions on enhancing the practical cooperation between the two countries across the board and they have reached broad agreement.
Liu said that both Presidents agreed that China and the Philippines will return to track of dialogue and consultation to properly handle the South China Sea issue.
… President Xi Jinping told Duterte that China “will lift the travel advisories issued a few years ago to Chinese citizens traveling to the Philippines.”
“This lift will encourage more Chinese citizens to travel in the Philippines,” Liu said, quoting President Xi.
The Chinese side has also resumed permits to 27 Philippine companies exporting tropical fruits to China, including mangoes.
In the area of tourism, the two Presidents also talked about increasing people-to-people ties between the two countries through efforts to enhance exchanges in education between tourists, sending students to each other, and establishing cultural centers in each other’s country.
“The cultural exchanges will start very soon. The two Presidents also talked about cooperation in regional and international affairs,” Liu added.
http://thestandard.com.ph/news/-main-stories/top-stories/219374/duterte-visit-reaps-harvest-of-13-deals.html
In spite of its highly significant geopolitical gain, China chose to exercise magnanimity, in keeping with Oriental norms.

As Duterte emphasized, the Philippines hopes to maintain good relations both with the US and China, especially when the former needs economic support from China. According to disclosures by WikiLeaks, Hillary Clinton’s speech at Goldman Sachs showed that she also realized that Asia-Pacific countries do not want to pick sides between China and the US.

Although Duterte is often rude to US officials, Washington should recognize the potential benefits of Manila’s choice to conduct independent diplomacy.

This can significantly reduce the risk of the rebalancing and prevent the US from being entrapped in unnecessary military conflicts in the Asia-Pacific region.

Duterte also invited Vladimir Putin to a three-some company against the Old World Order.
In response, the Russian ambassador said that Duterte needs only to have his “wish list” of where Russia could come in. This is a reiteration of what Prime Minister Medvedev already said during the last ASEAN Summit in Laos.
‘Make a wish list’: Russian ambassador says Moscow ready to provide assistance to Philippines

“Formulate your wish list. What kind of assistance do you expect from Russia and we will be ready to sit down with you and discuss what can and should be done,” Russian Ambassador Igor Khovaev told GMA News on Friday.
He went on to state that Russia is open to working with the Philippines in “any area, any field of possible cooperation.”
The ambassador assured the news outlet that Moscow would not “interfere with the domestic affairs of a sovereign state,” and that the “true Russia” is much different than the one portrayed in Hollywood films.
Khovaev added that the Philippines and Russia “deserve to know each other much, much better.”
He also said that Philippines President Rodrigo Duterte impressed Russian Prime Minister Dmitry Medvedev during a meeting in Laos last month, and that Moscow supports the leader’s fight against illegal drugs and criminality.
For its part, the Philippines’ budget minister announced that his country is open to all forms of assistance, but will choose what is in the “best interest of the country,” Reuters reported.
https://www.rt.com/news/363597-russia-philippines-cooperation-duterte/
The Red Scare propaganda in the 70s has been very effective here in the Philippines. So much so that the people don’t know how good the Russians really are especially in the areas of science and technology, which is the direct result of its liberal view towards even the most “ridiculous” of all ideas. The Russian-designed Tokomak fusion reactor, for example, is something that the US is moving heaven and earth so that it could not be released to the world.
“The achievement of controlled fusion has been at mankind’s fingertips for decades. Had the trajectory established in the early decades of the U.S. fusion program continued, mastery of fusion as a power source would already be providing nations of the world with virtually unlimited energy, would have created a qualitative transformation in our powers of industry, transportation, and medicine, and would have completely revolutionized our species’ power to transform the conditions of life on our planet through unprecedented rates of physical economic growth and development.
The failure to realize this promise is not due to its impossibility, nor to a lack of capability on the part of fusion scientists, engineers, and scientific institutions. Fusion is not “always 50 years away”; it has been deliberately suppressed under a top-down imperial policy, carried out via the mechanism of intentionally crippling budget cuts, which have created a factor of attrition strong enough to delay for decades what would have surely already been achieved. One merely has to envision where we would have been as a species today had fusion been achieved by the 1990s, as intended by leading fusion scientists in 1976.[1]
The undermining of fusion, typified by the dismally low FY15 budget request of the Obama Administration, which proposes to shut down key fusion experiments in the U.S., must immediately cease. A fully funded, accelerated fusion program as a priority national mission is at the foundation of the survival and progress of our nation, and mankind as a whole.”
http://www.larouchepub.com/other/2014/4120fusion_crushed_usa.html
In contrast, Western researchers can’t have their research granted if they are pursuing to undermine the economics of scarcity.
At best, the military industrial complex is churning out inferior products at ridiculously high cost to the taxpayers. Stealth F35 comes to mind.
Duterte’s raw courage and honesty about the true nature of Western geopolitics could serve as an effective rallying point, while both Russia and China provide the necessary backbone, by which this global resistance against the Khazarian World Order could move on to its desirable conclusion, i.e. peace and prosperity for all.