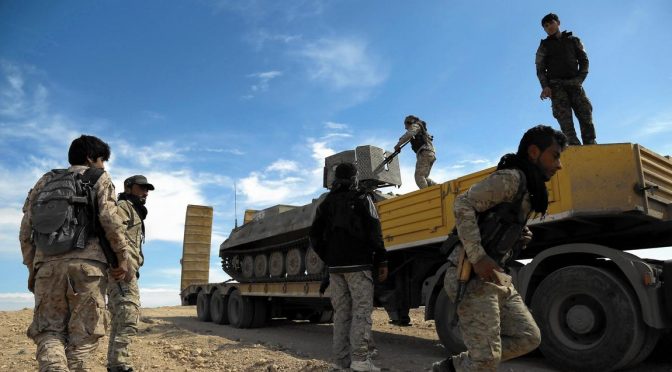 It’s not a Hollywood movie. It’s still happening right now.
In what could be the most defining moment of the US government foreign policy, or more accurately, sheer stupidity, the Pentagon armed commandos operating with their allies in Syria are now shooting CIA trained and funded terrorists, and for what purpose?

The way we see it, the whole Zbigniew Brzezinski Grand Chessboard is not going well. Thanks to the timely and decisive military intervention of the Russian-led coalition in Syria, the grand march towards Iran has been deterred for good.
CIA-armed militias are shooting at Pentagon-armed ones in Syria
From Chicago Tribune
Syrian militias armed by different parts of the U.S. war machine have begun to fight each other on the plains between the besieged city of Aleppo and the Turkish border, highlighting how little control U.S. intelligence officers and military planners have over the groups they have financed and trained in the bitter 5-year-old civil war.
The fighting has intensified over the past two months, as CIA-armed units and Pentagon-armed ones have repeatedly shot at each other as they have maneuvered through contested territory on the northern outskirts of Aleppo, U.S. officials and rebel leaders have confirmed.
In mid-February, a CIA-armed militia called Fursan al Haq, or Knights of Righteousness, was run out of the town of Marea, about 20 miles north of Aleppo, by Pentagon-backed Syrian Democratic Forces moving in from Kurdish-controlled areas to the east.
“Any faction that attacks us, regardless from where it gets its support, we will fight it,” said Maj. Fares Bayoush, a leader of Fursan al Haq.
Rebel fighters described similar clashes in the town of Azaz, a key transit point for fighters and supplies between Aleppo and the Turkish border, and March 3 in the Aleppo neighborhood of Sheikh Maqsud. 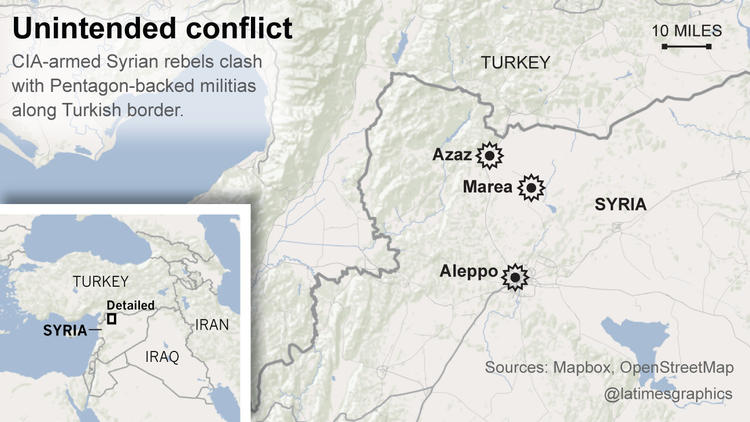