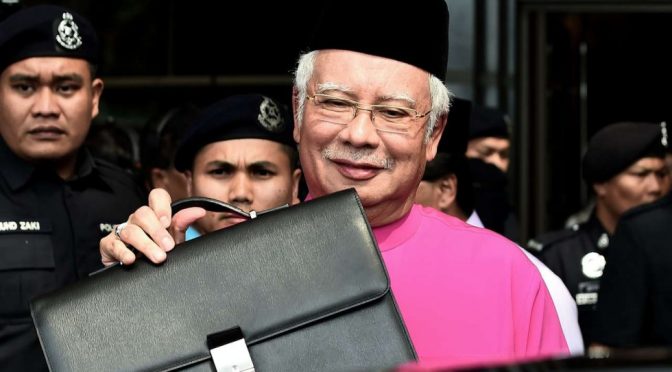 US policy in the South China Sea received a powerful blow during Duterte’s momentous visit to Beijing, when he officially announced his country’s “separation” from the US and “realignment” in China’s “ideological flow.”
Read more: https://sputniknews.com/asia/201610311046902170-malaysia-china-prime-minister-visit/
Najib Razak’s visit to China is expected to cement defense deals, as well as in economics.

The text of a speech to be delivered by Malaysian Defence Minister Hishammuddin Hussein was posted on Facebook last week saying his government would will sign a contract to purchase naval patrol vessels from China during the trip. The post was later removed.

Over the first three months of this year, Chinese investment in manufacturing in Malaysia reached 1.5 billion ringgit (HK$2.7 billion), making it the largest foreign investor in the sector.

Chinese firms have also secured major deals in Malaysia, including a US$7.3 billion port deal in the city of Malacca. China is widely expected to sign a contract to build Singapore to Malaysia high-speed rail line.

Ties between the United States and Malaysia have been strained since the US Department of Justice launched lawsuits linked to money laundering investigations into Najib’s pet project, 1MDB. Further deals and investment with China could put a further strain on ties with Washington.

In his own bluntly-worded manner, former President Fidel V. Ramos said that President Rodrigo Duterte was “full of S….T” if he thought his diatribes against the Philippines’ allies and the 2015 Paris Agreement on Climate Change Agreement was his God-given destiny, given that his rejection of the climate agreement was akin to him and the entire country “shooting [themselves] in the mouth”.

… Ramos argued further that failure to ratify the Paris Agreement would limit the Philippines’ participation in the 22nd session of the Conference of the Parties (COP 22) in Marrakesh to mere observers, and we would thus be unable to advance the interests of the country.

Ratification, however, will “enable us to secure more investments towards our climate goals and gain access to the financial, technological, and capacity-building support to be provided to parties of the Agreement.”

Ramos concluded by calling on the president to approve the Paris Agreement “forthwith”, and “certify it for Senate ratification to promote our country’s interests and fight for climate justice.”

This is just one of a series of stupid, unwarranted interference on the policies of the incumbent Duterte government, which border on utter hypocrisy considering Ramos’ failed “trickle down” economics, and massive privatization of critical government utilities, all of which did not uplift the life of the majority in the Philippines.

Leftist groups have also criticized Ramos for his economic reforms such as privatization, deregulation and trade liberalization, claiming that the economic growth posted during his presidency was “artificial.” They blamed him for the slowdown of the Philippine economy during the 1997 East Asian financial crisis.[30] The sale of 40% of Petron to Aramco is specifically criticized for resulting in the loss of the government’s effective leverage on domestic oil prices.

… In 1998, the Union for Socialist Ideas and Action told a left-wing Australian organization that Ramos hesitantly admitted that contrary to his government’s earlier claim, the economic fundamentals of the country may actually be unsound. His admission came following the discovery of a secret memorandum issued by the National Economic Development Authority director-general urging the president to tell the Filipinos the truth about the state of the economy and that they ought to prepare for worse. According to former University of the Philippines president Francisco Nemenzo, Ramos “has done nothing to reverse or slow down the implementation” of the harmful IMF-imposed structural reforms.[31]

While Malaysia’s Mahathir was very vocal against Soros’ currency attack on the ASEAN economy, Fidel Ramos was so silent about the whole sordid affair in 1997.
Ramos’ series of unsolicited advice started just after Duterte announced his “separation from United States” and for joining China in its “ideological flow.”
Let it be remembered that Ramos was given a consultancy position at the Carlyle Group when his 6-year term as president ended in 1998. This consultancy position and that of this presidency served as a lifelong reward for his cooperation in the toppling of the late president Ferdinand E. Marcos.
“Despite earnest grassroots nationalist opposition over the past several decades, the Philippines remains a neo-colony of the United States, economically and military bound to Washington, and hopelessly addicted to foreign capital.
The US has a huge economic stake in the Philippines, which is central as a military and intelligence base, as well as a source of energy, raw materials, land, and cheap labor. It was no surprise that securing the Philippines was the focus of the first US post-Afghanistan intervention in the so-called “war on terrorism.”
In his book Endless Enemies, the late Jonathan Kwitny described the Philippines as “the Zaire of Asia,” and “the one Asian country where we (the United States) have engaged in covert political activity, and sometimes fighting, and where things have gone pretty much our way. Every anti-guerrilla campaign has been victorious, and every election, real or rigged, has produced the winner the US government desired.”
… Former President Fidel V. Ramos is Arroyo’s “special envoy for international opportunities.” Despite his denials about the importance of his role, Ramos functions essentially as the country’s co-president.
He is also a direct agent of the Bush oligarchy.
Ramos is a senior advisor of the Carlyle Group and the head of Carlyle’s Asian advisory board. Its directors include former US president George Herbert Walker Bush, former US secretary of state James Baker, current US secretary of state Colin Powell, former SEC chairman Arthur Levitt, former UK Prime Minister John Major, and former South Korean Prime Minister Park Tae-Joon.
Carlyle’s client list has included the likes of the bin Laden family and George Soros (a major player involved in the so-called Asian economic crisis of the late 1990s). Saudi prince Alwaleed Bin Talal has been one of Carlyle’s major investors. Its chairman is former Reagan administration defense secretary Frank Carlucci. Carlyle has major stakes in Taiwan, Singapore, South Korea, Japan and China, which was recently admitted into the World Trade Organization.”
http://www.globalresearch.ca/articles/CHI208A.html
Ramos also spearheaded the 2nd Yellow Revolution to topple the more popular President Joseph E. Estrada in 2001. He is expected to lead again the toppling of the incumbent president Rodrigo Duterte, not only for the latter’s pivot to BRICS, but to preserve the Abu Sayyaf terror network which is now suffering heavy casualties amidst heightened military operations in Sulu and Basilan.