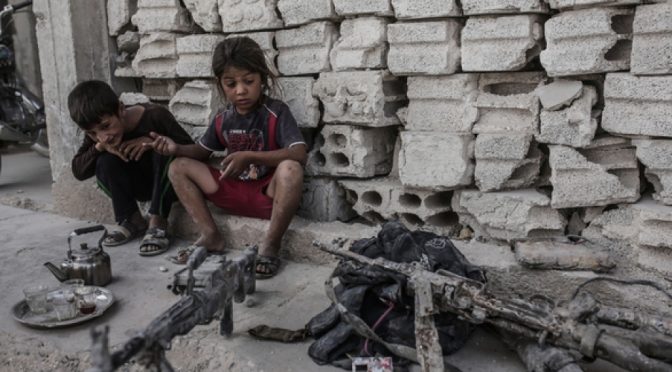 For the last 16 days, the Russian Aerospace Forces have halted their operations over Aleppo to prove to the United Nations, and the world, that they are not keen on killing civilians in their efforts to recover the city from terrorists, as claimed by Western leaning institutions.

As a result 100s were executed while crossing to the government side via humanitarian passages, by Daesh “moderate rebels.”
More than 2,000 so-called “moderate rebels” shelled residential areas of the Syrian city of Aleppo using 22 battle tanks, 15 infantry fighting vehicles, eight “jihad-mobiles” and rocket artillery, Russian Defense Minister Sergei Shoigu said Tuesday.
“Most of the militants’ vehicles have been destroyed,” the minister underscored. Shoigu said that eight humanitarian corridors are open for Aleppo residents to leave the embattled city but militants execute dozens of civilians daily for attempting to approach the passages.
“Is this the opposition with which it is possible to negotiate?” the defense minister asked. He said the Russian Aerospace Forces have been grounded for 16 days.
“At the order of the Supreme Commander-in-Chief of the Russian Armed Forces, we have not been using aviation in Aleppo for 16 days.”
Read more: https://sputniknews.com/middleeast/201611011046945033-moderate-opposition-shells-aleppo/
Forget Halloween: There’s Plenty of Real-Life Horror in the Middle East
For many across the region, horror and fright constitute a permanent condition rather than a source of controlled entertainment.
By Belén Fernández
In the Iranian city of Isfahan the other day, I chatted with a carpet vendor who had in his possession two carpets woven by Afghan refugees in Iran.
At first glance, they appeared to be just like any other colourfully patterned carpets, but upon closer inspection one’s eye began to pick out warplanes, guns and tanks among the more typical shapes.

The seller remarked to me matter-of-factly in reference to the Afghan weavers’ products: “That is the world they know” – one in which the terror of war has infused every aspect of existence.
To be sure, it’s a world away from those in the West who, in accordance with the annual cycle of profit-driven holidays, are today celebrating Halloween.
Nothing against horror films or haunted houses, of course, but we might as well exploit the occasion to reflect on the circumstances of people for whom horror and fright constitute a permanent condition rather than an occasional source of controlled entertainment.
Drones never die
Consider one of the more recent forms of sadistic violence to which Afghanistan has been subjected over the years: US drone strikes, which would assuredly beat any horror script hands down. Ditto for Pakistan, Yemen and other venues on the receiving end of drone-fired projectiles – themselves a mere fraction of the munitions with which the reigning superpower has saturated much of the globe.
A 2013 article in The Guardian tells the story of a 67-year-old Pakistani midwife reportedly killed by US drone the previous year while picking okra with her grandchildren. Quoted in the piece is the 13-year-old grandson’s description of the event:
“When the drone fired the first time, the whole ground shook and black smoke rose up. The air smelled poisonous. We ran, but several minutes later the drone fired again.”
According to an Amnesty International researcher who investigated the case, the grandmother was “literally hit flush and… blown to smithereens”.
One might assume that the grandson, himself also wounded in the attack, would have thus more than exhausted his earthly trauma quota. But the fact of the matter is that there’s no such thing as “finished business” when it comes to unmanned aerial vehicles, which instead tend to institutionalise themselves in appointed atmospheres – as any Palestinian living under the terrorising buzz of Israeli drones can tell you.
‘Better than cinema’
Palestinians can meanwhile tell you about a number of other matters, as well, such as the ever-present possibility of spontaneous reduction to smithereens by a variety of methods ranging from missiles to fragmentation bombs to bulldozers to regular old bullets.
He had spent much of the recent conflict sitting under a tree and watching the bombs fall because, he said, south Lebanon was ‘better than cinema’
As has been confirmed time and again by Israel’s choice of military targets – including homes, schools and hospitals – there is not a single safe space for Palestinians anywhere on the land that rightfully belongs to them.
Nor has there been a surplus of safe space in Lebanon owing in part to Israel’s periodic cross-border forays, which have been characterised by infamous episodes such as the 1996 massacre of more than 100 civilians sheltering at a UN compound in Qana and the 2006 close-range slaughter of children evacuating south Lebanon in accordance with Israeli orders.
When I visited Lebanon shortly after the 2006 war, I spoke with a south Lebanese man who told me he had spent much of the recent conflict sitting under a tree and watching the bombs fall – because, he said, south Lebanon was “better than cinema”.
Places where such things happen
As real-life horror movies now play out back to back from Syria to Iraq and beyond, endless reports of more atrocities and more corpses have done little, it seems, in the way of generating empathy among Western audiences. Instead, they’ve reinforced the notion that these are simply Places Where Such Things Happen.
Public ignorance is bliss for war makers and weapons dealers
There are numerous reasons for the general desensitisation. For one thing, it’s difficult to engage emotionally given the context of pervasive distraction in which many of us presently exist, news flashes bombarding mobile phone screens along with billions of other attention-grabbing items.
Furthermore, it doesn’t behoove the Western establishment media to focus too deeply on humanising the victims of much of the ongoing violence given that this might bring up inconvenient questions—like why the US flings billions of dollars a year at Israel or why the US & Co opted to destroy Iraq, a place that had never in its history experienced a suicide-terrorist attack prior to the 2003 invasion.
That said, Arabs and Muslims do stand a far greater chance of being humanised if their plight can be used to justify further military escapades. Recall the women of Afghanistan whom we were going to liberate – or the Iraqis we were going to rescue from the tyranny of Saddam Hussein.
It’s also true that public ignorance is bliss for war makers and weapons dealers. As award-winning writer and professor Moustafa Bayoumi points out in a recent opinion piece for The Guardian – titled “The US just bombed Yemen, and no one’s talking about it” – America’s seemingly definitive entrance into the Yemeni war was preceded by an incident on 8 October in which “a 500lb laser-guided US-made bomb was dropped on a funeral procession by the US-sponsored Saudi-led coalition fighting the [Houthi] rebels”.
The bomb, Bayoumi notes, “killed more than 140 people, mostly civilians, and wounded more than 525… Human Rights Watch called the incident ‘an apparent war crime’”.
In other words, it was nothing overly worthy of discussion in the age of distraction.
As the state of terror in which many populations exist becomes increasingly normalised, it often seems that the upshot is this: other people lose their lives, and we in the West lose any semblance of humanity. And that, no doubt, is a terrifying arrangement. Happy Halloween.
© 2016 Middle East Eye
Belén Fernández is the author of The Imperial Messenger: Thomas Friedman at Work, released by Verso in 2011. She is a member of the Jacobin Magazine editorial board, and her articles have appeared in the London Review of Books blog, Al Akhbar English and many other publications.