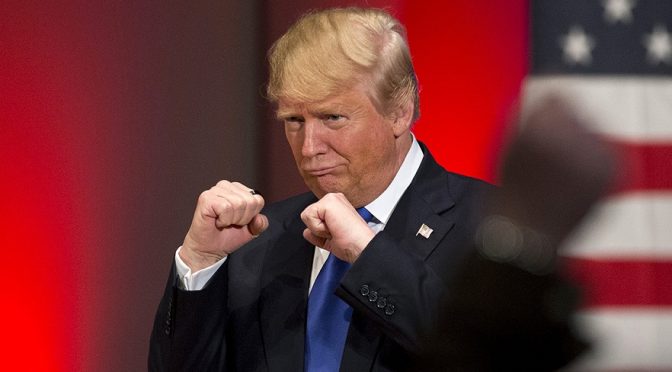 Democrats are shocked, Trump supporters elated. They all believed they were fighting valiantly for the sake of freedom and democracy.
The new US President elect Donald Trump is not expected to be a wartime president. Trump supporters suggested that he will spearhead the economic revival of the United States by rechanneling its financial resources, what’s left of it anyway, for the reconstruction of the local industries and away from wars of aggression in the Middle East.

But whether he would truly move to end the CIA Daesh misadventures in Iraq and Syria is something that we have yet to see. But, at very least, that’s what Trump supporters understood during his campaign, even when he promised to “bomb the shit out of them,” for the same “ExxonMobil to come in within 2 months.”
https://www.youtube.com/watch?v=aWejiXvd-P8
So, while the Wall Street bankers are initially panicking as their power is being threatened now that an “unpredictable figurehead” is about to sit in the White House, we however believe that just like before, all these financial vultures need to do is to weather out the Trump presidency, and resume control of the White House when he’s gone.
Even so, these probabilities do not remove the possibility that the outgoing Obama administration, or the covert arm of the Clinton Campaign, will initiate a false flag operation any day now, which would impede the official assumption of the Trump presidency in January.
In fact, there is already a NATO plan to put 300,000 troops along the Russian border to stop the “invading Russians” from occupying Europe. What if somebody sends a missile right into the Russian Federation soil to trigger a nasty response?
Adam Thomson, the outgoing permanent representative to Nato, estimates that at present, it would take the military alliance 180 days to deploy a force of 300,000, and that speeding up this rate is of top importance.
http://www.express.co.uk/news/world/729453/nato-putin-russia-war-troops-military
As of this writing, the increased U.S. troop presence in Eastern Europe includes a battalion-sized element of American troops being employed in the Suwalki Gap, Polish territory that borders Lithuania in a 60-mile stretch of corridor. The Russian Defense Ministry announced that 600 Russian and Belarussian airborne troops conducted training exercises in Brest, on the Belorussian-Polish border only a few miles from where the U.S. forces are deployed in Poland. This on the heels of Britain deploying 800 men, tanks, and jets to Estonia, along with pledges of Challenger 2 tanks, APC’s (Armored Personnel Carriers), and drones.  Two companies of French and Danish Soldiers will join the British in the deployment to Estonia.
http://russia-insider.com/en/politics/something-big-underway-all-fronts/ri17390
We cannot discount all those possibilities from a sociopath that is surely going to jail, if only the FBI under the Trump presidency, is really up to the task. Although some say, that the FBI was just buying time for Obama to step down, so that the latter won’t be able to give a convicted Hillary Clinton an unconditional pardon.
If Donald Trump is allowed to assume office next year without unnecessary hitches, he promised to allow gas fracking and oil pipelines to continue in order to generate jobs and prop up the economy, which would return us to the first question whether he will end the CIA misadventures in the Middle East which are in part about new oil pipelines through Syria.
The same corporate routines like extracting high taxes, costly education, and daylight bank robbery out of your savings, are not about to go away yet. All the systems in place will continue to function as designed. Just a few housecleaning will be done, i.e. removal of the perceptively bad eggs in the Corporatocracy.
“Draining the swamp,” or the removal of those who got too greedy, may be in short order.

Donald Trump’s campaign manager, speaking on MSNBC, said appointing a special prosecutor for Hillary Clinton can’t be ruled out, adding that discussion regarding the issue will happen “in due time.”

Trump and Vice President-elect Mike Pence are “looking to unify the country, but we haven’t discussed that in recent days, and I think that it’s all in due time,” campaign manager Kellyanne Conway told MSNBC in an interview, as quoted by Reuters.

Trump did not bring up the issue when speaking on the phone with Clinton overnight, the campaign manager added in a separate interview for ABC.

But, just like Obama’s initial entry to the White House, anything can happen after a meeting with the outgoing president.
https://twitter.com/RT_America/status/796326232505876480
Yes, this is not yet the return to the Constitutional United States Republic, but only a renewal of the people’s faith in the system. Will the Trump administration provide the environment for a return to that constitutional republic?
That is yet to be determined. But, some things are sure enough to come through.
Racism will continue, for sure.
There will also be a fierce competition between developed economies against the revitalization of the American industrial infrastructures. Russia is poised to be a non-GMO food global powerhouse due to an increase in organic agriculture production. China still dominates the steel industry.
Both Russia and China will also force other nations to shift to nuclear fusion-fission hybrid in the next 10 years. Together with India, they are already working in this direction, which should end all wars for oil in the near future.
Will Trump stop the geopolitical and geo-economic maneuvers in Latin America, the ongoing genocide in Yemen, and bioweapon attacks against Africa?
That would be a long shot. Again, racism will play a major role.
How about the long-standing US pro-Israel stance, will it ever change even for a bit?
Israel is not expecting any of that sort. In fact, they are expecting Trump to follow in their footsteps in building a nice wall to ward off Mexican “rapists,” and “terrorist” Muslims.
ASEAN countries, for their part, will never allow the militarization of the South China Sea. Along that line, Duterte has been moving around the ASEAN countries to formulate a more neutral foreign policy, at least, or one that is more leaning towards the BRICS. He is currently on a working visit to Thailand and Malaysia specifically for this purpose.
More than a week ago, Duterte also appointed a Trump business partner here in the Philippines to be the special economic and investment envoy to the United States, underscoring the fact that the Duterte administration already knew the outcome of the US presidential elections.
Trump business partner in Philippines named special envoy to US
MANILA, Philippines – US presidential candidate Donald Trump’s business partner in the Philippines has been named as another special envoy to the United States.
Businessman Jose E.B. Antonio is the founder of Century Properties Group Inc. (CPGI), the company behind Trump Tower Manila.
… In a disclosure to the Philippine Stock Exchange (PSE) yesterday, CPGI said President Duterte appointed Antonio, the company’s chairman and CEO, as special envoy to the US last Oct. 28.
“His mission is to enhance business ties and strengthen the economic affairs between the two countries,” CPGI said in its disclosure.
http://www.philstar.com/headlines/2016/11/08/1641676/trump-business-partner-philippines-named-special-envoy-us
Just like in the immediate aftermath of the Brexit vote, stock casinos have plunged worldwide. But they will surely recover in the days ahead, because for them it’s just a game of perceptions, i.e. the perception that this grand exercise is done in the furtherance of democracy and freedom, in spite of their complete control of the mass media that’s deliberately limiting the choices between red and blue only.
It seems that the Jesuit Khazarian hierarchy decided to play it safe, lest they lose the whole enterprise for good. A Clinton presidency would have sent the growing armed resistance more restless in the next four years.
In short, we have been restricted to a choice between a full blown nuclear war, that neither countries really want to go, and a continuation of the Vatican-led Corporatocracy, the lesser evil that Trump supposedly represents, and for which the hidden hands believe we must all be grateful.
Restricted choice will never lead to true freedom and democracy. Only an active, awakened masses will do. That’s what prevented a Clinton presidency today, and exactly what has left the mainstream media and pollsters dead in their tracks. Wikileaks facilitated that.
Let this small victory see its ultimate conclusion, i.e. an empowered masses, because Centralized Power will always be open to abuse by the few.
The revolution must continue.
https://youtu.be/IOiUrF74F14