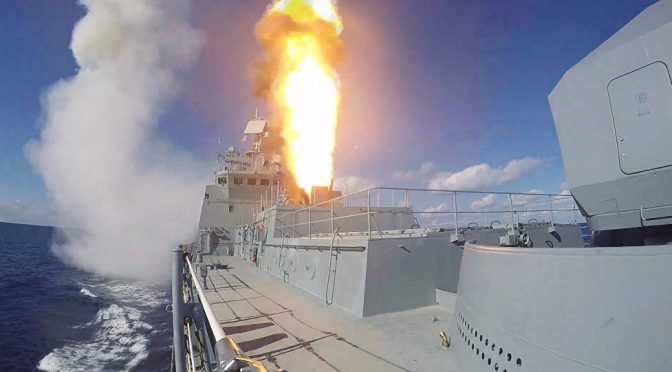 The Russian-led coalition battling ISIS in Syria just restarted their operations against the terrorists who opted not leave the area during the unilateral 28-day Russian ceasefire aimed at forcing the United States to separate the “moderate rebels” from Daesh extremists.

In line with this, the Syrian government offered a free pass for all terrorists holding up inside Aleppo, and continue to use an estimated 175,000 civilians as human shield since the occupation began.

Instead of cooperating with Russia, the Obama government issued multiple provocative statements diverting culpability of the Syrian “civil war” to the Russians.

There’s no civil war in Syria, and the Assad government invited the Russian military to help repel the invaders.

Now, Russia is back to finish the job of exterminating the CIA terror assets for good, via Syrian airspace and sea…
https://www.youtube.com/watch?v=ecTbYTCO9X8
https://www.youtube.com/watch?v=k0GImEfpCZI
While on the ground, the Iranian-retrained Syrian Army is more than happy to oblige from “nine flanks.”
TEHRAN (FNA)- General Command of the Syrian Army announced on Tuesday that the country’s soldiers and popular forced are about to hit Jeish al-Fatah’s positions in the Eastern districts of Aleppo from nine different flanks.
“Our forces, including very well trained units, are deployed in nine different fronts and are waiting for the specified deadline,” the command center said in a statement.

Other informed sources disclosed that the Syrian army has prepared a large number of forces, who are expert in street battle and are equipped with lethal weapons, ready to start final the battle with the terrorist groups.
The sources also added that these forces will be backed up by the missile and air support of the Syrian and Russian forces.
Media sources disclosed on Monday that Jeish al-Fatah ordered all its militants in Aleppo to stay on the alert after reports indicated that the Syrian army is preparing to launch a massive assault in the region.
The Arabic language al-Mayadeen reported that Jeish al-Fatah warned its members to stay on the alert as pro-government troops are preparing to start a fresh phase of operation, urging them to intensify security measures.
Jeish al-Fatah also called on its fighters to carry out preemptive operation in Aleppo.
http://en.farsnews.com/newstext.aspx?nn=13950825000285
A large number of Turkish Army tanks were also seen entering Syrian from the North. They are expected to protect the Turkish interests that collide that of the Kurds, which the US commandos have embedded themselves into.

TEHRAN (FNA)- Some Ninety tanks of the Turkish Army along with a long column of vehicles carrying arms and ammunition have arrived in Northern Syria to take part in an operation to reportedly capture the town of al-Bab in Northern Aleppo, an informed source said Tuesday.
“Ninety tanks of the Turkish army crossed the country’s Southern border into Northern Syria in al-Shahba region this morning. The army sent the tanks to the battlefields near the town of al-Bab,” Hawar news quoted the source as saying.
“It’s not yet clear where the tanks crossed the border into Northern Syria, but the Turkish forces and Ankara-backed terrorists are very overtly preparing to capture al-Bab,” Hawar added.
On Thursday, the Turkish army in al-Shahba region equipped the terrorists with heavy weapons, including M60 tanks.
According to Kurdish-affiliated Hawar news, several footage and images have been released by the terrorist groups in different websites which show that they are using the Turkish army’s armored vehicles in the Tal Jorji village in al-Bab region.
The images showed that the terrorists were using M60 tanks.
Turkey has deployed a large number of its tanks and armored vehicles in Northern Syria after the start of the Euphrates Shield operation by Ankara.
The Turkish forces, backed by US-led coalition aircraft, started the Euphrates Shield military operation in August, claiming that they intend to purge terrorists from Syria’s Northern territories and create security zones for accommodation of refugees.
http://en.farsnews.com/newstext.aspx?nn=13950825001386
Russian Naval Group in Syria Protected by S-300, Bastion, Pantsir Systems
15:03 15.11.2016 (updated 17:15 15.11.2016)

“As you know, S-400 system had been deployed [in Syria] a long time ago. In addition, we have deployed the S-300 system to cover the sea, practically reaching the territory of Cyprus,” Shoigu said at Russian President Vladimir Putin’s meeting with the ministry’s leadership and defense enterprises.
Moreover, Bastion coastal systems which virtually cover the entire coast are deployed, he said.
“These complexes are able to destroy both sea and ground targets at a distance of 350 kilometers of the sea and almost 450 kilometers of land,” Shoigu said.
He also confirmed that the Russian naval group in Syria is defended by the Bastion, moreover the Russian bases in Syria are now secure from low-flying targets.
“Pantsir systems are supplied there because of that. In addition, over the past four months the Syrian S-200 systems have been restored, which cover the Syrian territory from the east among other things and support the protection of our bases in Tartus and Hmeymim from the air.”
The Russian president ordered to protect the Russian Armed Forces in Syria from the air and sea.
In October, the Russian Defense Ministry said that a S-300 system was sent to Syria to ensure the safety of the Russian naval base in Tartus. According to media reports, the system deployed in Syria is S-300V4 — NATO designation SA-23 Gladiator — that is capable of striking tactical and strategic aircraft, medium-range ballistic missiles, tactical missiles as well as cruise missiles.
https://sputniknews.com/military/201611151047455462-s-300-syria-russia/
The Syrian people have lived in the area peacefully for thousands of years with relative peace among different sects and belief systems. Foreign interest groups shattered that unity through the art of sowing intrigue. But the method failed to account for a moral man like Assad.

“The Israeli-Franco-Anglo-American power-brokers, who have controlled the destiny of most of the Middle Eastern nations for decades, have entered a new and desperate phase of conquest.  Unfortunately for the entire Mideast, that desperation manifested as the fomenting of a number of revolutionary Arab Spring events.  The resulting widespread death and destruction reflects just how determined the AAA is to advance their misguided agenda.
Whereas each of these engineered protest movements was initiated by the agents of the AAA, not all of them were entirely successful.  While the CIA, MI6 and MOSSAD may have most of the Middle East hardwired by way of information technology, many of the indigenous peoples still remain off their grid, to varying degrees of course.  Nevertheless, they still expected Assad to simply resign after so many other countries had succumbed to the CIA-directed Facebook revolutions and civil wars via Twitter.
… President Assad, they have come to find out, is a completely different kind of being.  Not only is he not of their ilk, his very presence on the Mideast geopolitical chessboard causes them great consternation.  Why?  Because President Assad has a conscience in contrast to the many other leaders who clearly govern without any conscience whatsoever.
… here is Bashar al-Assad’s unwavering dedication to his family’s spiritual traditions and religious faith.  Being an ardent practitioner of the Alawite religion like his father and forefathers before him, Assad has drawn great strength from this mystical and tolerant branch of Shia Islam. He went into the medical profession and trained as an ophthalmologist because of his desire to serve the Syrian people.

Also known as Alawis, Alawites “are a prominent religious group, centered in Syria, who follow a branch of the Twelver school of Shia Islam but with syncretistic elements. “[1] Because his religious community had suffered religious persecution and many other indignities over generations prior to his father’s presidency, he is quite sensitive to the need for religious tolerance.  Particularly within the context of Syria’s historical religious diversity, did the Alawites rise to provide the cohesive leadership necessary to maintain the peace and mutual acceptance.  This remarkable achievement occurred over decades when many neighboring nations suffered the fate of one failed government after another.
For those who are cognizant of the well-known Hindu religious tolerance in India, Alawites are quite similar.  They not only believe in reincarnation as in the East, they have also absorbed many other aspects of the predominant religions in Syria especially those found in Islam and Christianity.  Because of their syncretic approach in both philosophy and practice, Alawis have evolved into a genuinely tolerant spiritual community who actively cultivate a climate of mutual respect.  However, it is the mystical aspects of their spiritual practice which has earned them the respect of the Syrian people.  Because they are known to walk their talk, they have been trusted to lead as they have done for almost 5 decades.”
https://geopolitics.co/2015/09/16/the-moral-forces-behind-syrian-prez-bashar-al-assad/
The systematic destruction of the Syrian infrastructures and cities are aimed at expanding Rothschild’s pet project Israel.
The systematic destruction of the Syrian culture is aimed at destroying their identity as a nation.
https://www.youtube.com/watch?v=2gh2uJCfpo8
We still have a long way to go.