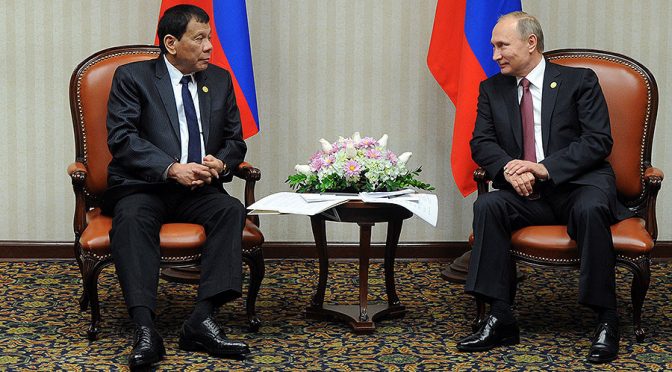 The two strongmen finally met at the APEC Summit in Peru.
This is just a prelude to the formal reestablishing of stronger Philippine-Russia diplomatic ties when President Duterte visits Russia before the year ends.

Western nations start wars they are scared to fight themselves – Duterte to Putin at APEC summit
Philippines President Rodrigo Duterte has met Vladimir Putin for the first time at the APEC summit in Peru, praising his Russian counterpart’s leadership skills and blaming the West for “bigotry,” terrorizing smaller nations and warmongering.
The two leaders met in the Peruvian capital, Lima, on Saturday to discuss the development of Russia-Filipino relations.
Putin welcomed a chance to talk with Duterte, recalling that the two nations are celebrating 40 years of diplomatic ties.
“This time span is short in the terms of history, but we have been able to do a great deal for developing relations of comprehensive partnership and increased confidence,” TASS cited the Russian leader as saying.
He also congratulated Duterte with his victory in the presidential election, which took place in the Philippines on May 9. Putin explained that it’s a special date for all Russians, as the country marks victory over Nazi Germany in 1945.
Duterte said he was looking forward to meeting the Russian president “not only because you represent a great country, but because of your leadership skills.”
According to the Philippines president, his country was always looking to become part of the Western world, “but now the Western nations are making attempts to attack small states and to intimidate them.”
Such behavior is “the sign of bigotry” on the part of the US and its allies, he added.
“They begin wars which they are scared to fight themselves,” Duterte said.
He blamed Washington for unleashing conflicts in many countries – Vietnam, Korea, Iraq, Afghanistan and elsewhere as part of its “destructive policies.”
https://www.rt.com/news/367531-putin-duterte-west-peru-apec/
https://www.youtube.com/watch?v=Y4w5qhtFbc4