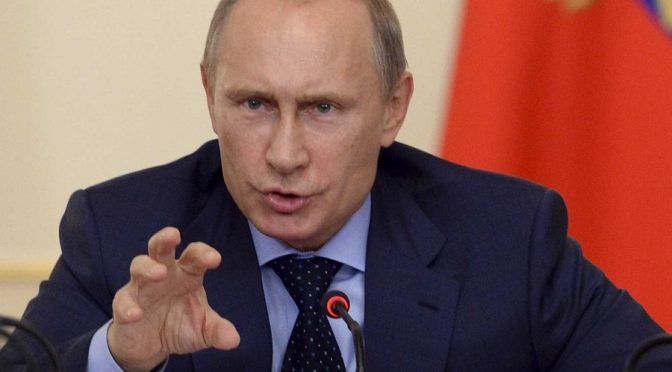 Vladimir Putin virtually said this, in response to a concern raised about the “suffocating” encirclement of NATO around Russia’s border.

https://youtu.be/-FhCi7qQPbk
This is in full congruence to his earlier pronouncement of destroying the Old Word Order folks with his “bare hands,” to pave the way for a “multipolar world,” which is now starting to manifest.
Putin has also expressed his own suffocating 7-year experience with Obama. In spite of his frustrations leading Russia to intervene militarily in Syria, and adding to his coolness as a black belted martial artist, he even invited the latter to visit the motherland, during his impending retirement.
https://www.youtube.com/watch?v=ae3dqGHVPaQ
Earlier on, Russia has allocated relevant resources to study how to counter the “regime change” habit of the West.
Russia Studying How to Effectively Neutralize Color Revolutions
The General Staff Academy of Russia’s Armed Forces has been working on the topic since the end of 2014 and is now set to develop a complex manual on countering “color revolutions”, Russia’s daily newspaper Kommersant reports on Wednesday.
One of its purposes is to define the most considerable threats to Russian security up to 2020 and come up with a unified set of tactics for revealing, preventing and counteracting the technique of using “color revolutions” to facilitate regime change, the newspaper quotes its sources in the Defense Ministry as saying.
The experts will also work on the “soft power” method (non-contact impact on potential enemy), asymmetric operations and measures to strengthen Russia’s political system and the political culture of the politicians, civil servants, businessmen and other residents of the country.
Last week Russian Defense Minister Sergey Shoigu told reporters  at the Army-2015 political forum that the military will sponsor a major project to research coups conducted through mass protest – so called ‘color revolutions’ – to prevent a repeat of the situations that Russia faced in 1991 and 1993.
“Some people say that the military should not be involved in political processes, while some say the exact opposite. We will order a study of the phenomenon of color revolutions and the military’s role in their prevention,” the minister then said.
Possible ways and means of counteracting “soft power” and “color revolutions” have been on the agenda of the forum.
The forum concluded that the “color revolutions” are now taking form of armed brawls and are being developed under the rules of the art of war, which makes it necessary for the Defense Ministry to take part in methodological research.
Moreover, the participants in the discussion also came to the conclusion that the Western countries have intensified their attempts to impose their “recipes for internal transformations” on other nations, without taking either national traditions or national peculiarities into account.
The term “color revolutions” refers to coups instigated from the outside and characterized by widespread unrest in countries such as Georgia, Ukraine, Tunisia or Egypt.
They are believed to be conducted with the help of the United States and other Western countries, with the appointed leaders serving as a medium in advancing Western interests.
This phenomenon gave rise to another term, “the export of color revolutions.” It denotes the Western support of opposition forces to influence domestic politics.
https://geopolitics.co/2015/06/24/russia-studying-how-to-effectively-neutralize-color-revolutions/
Out of that study, the BRICS strategy being implemented right now is to empower other countries economically and militarily, so that they won’t be easily defeated by hybrid external attacks, even by their own supposed allies in some cases, i.e. currency manipulation, color revolution, ICC kangaroo trials, etc.
Along this line, Putin and Xi invited the next year’s ASEAN chairman, President Duterte, to attend the BRICS Summit 2017, as an observer. This invitation is on top of the multiple and continuing lightning visits of Chinese business delegations to the Philippines, seeking investment opportunities to develop the countryside, e.g. agriculture, tourism, energy, infrastructure and cultural exchanges.
https://www.youtube.com/watch?v=CiCyFlcxtUI
Both BRICS leaders, Putin and Xi, recognize the golden opportunity and the need to defeat the Western influence in this very strategic part of the Pacific in order the weaken even further the ability of the Khazarian Mafia to wage conflicts thousands of miles away from their boardrooms.
The dizzying major infrastructure constructions and developments occurring on the Eurasian continent, in Latin America and soon in Southeast Asia, will only increase with the use of new technologies and the anticipated inward-looking orientation of the Trumpian government.

Otherwise, Vladimir Putin has already warned everyone about the Russian willingness to cross the bridge of WW3 if need be.
https://www.youtube.com/watch?v=kqD8lIdIMRo
Putin’s 2015 UN speech on ‘multipolar world’ coming to fruition
When Vladimir Putin took the podium to address the delegates in attendance at the 70th UN General Assembly in New York on September 28, 2015 the sense that we were about to witness a seminal moment in history was inescapable.
And so it proved.
The speech the Russian leader proceeded to deliver to the delegates in attendance, along with an expectant world via the international media, was tantamount to announcing the birth of a multipolar world, one in which Washington would no longer enjoy the uncontested primacy and hegemony it had since the demise of the Soviet Union in 1991.
In a trenchant indictment, Putin reminded the delegates of the responsibility of Washington and its allies in destabilizing the Middle East since 9/11, and how their actions had unleashed chaos and crises to the point where it now threatened to reduce the entire region to a state of permanent anarchy. The most powerful moment in the speech came when he looked up from his notes and out to the assembled international delegates, whereupon, directly addressing the US government and political establishment, he said, “Do you realize what you have done?”
It was a j’accuse delivered in the form of a simple question, penetrating the walls of propaganda that had been erected to conceal the truth of US exceptionalism. Russia was no longer a second tier power, Putin’s address confirmed, reduced to the role of bystander while Washington’s writ ran wherever it saw fit. And no longer was it, as unofficial representative of the emerging powers otherwise known as BRIC, prepared to accept a world in which the US, supported by its European allies, treated international law and the principle of national sovereignty as a gift to be bestowed or removed as it deemed fit rather than a universal and inalienable right.
… The build-up of Russian military equipment in Syria was near complete by the time Vladimir Putin delivered his UN address. The deployment had been conducted with impressive speed, taking Western governments and military analysts by surprise. This was not the ramshackle Russian military that lacked advanced equipment and communications capability during the brief Georgian conflict of 2008. Seven years of intensive upgrading, training and re-organization had borne fruit with Russia demonstrating the ability to project considerable military strength thousands of miles beyond its borders; this despite the challenges involved due not only to the distance but also the fact they were projecting said power into the middle of a conflict zone.
Equally impressive was the preparations that were made in the form of extending existing Syrian airbases in and around Latakia in order to be able to facilitate Russian aircraft and equipment, and also the establishment of a joint intelligence center in Iraq with the Iraqis, Syrians, and Iranians. As for the military hardware involved, going forward it would include some of the most advanced fighter aircraft in the world – the SU34 and SU35 – and the S300 and S400 anti-aircraft defense systems, acknowledged as the most advanced of any currently in existence.
https://www.rt.com/op-edge/367568-putins-un-speech-multipolar-world/
https://twitter.com/SputnikInt/status/800660027488935936
We can only hope that the entire American population will finally come to its senses and realize that the rest of the world don’t want war in all its forms. Everybody just wants to live in peace and harmony with one another.
Individual economic progress will deter one from joining the bankers’ war. That’s why these financial terrorists must make pauper in everyone to limit his choices.
All support to the Pyramid of Cartels must therefore be withdrawn, and all Khazarian Parasites must be exterminated to finally put an end to the cycle of violence on this planet.

3 thoughts on “We Can Choke NATO, Why Are You So Afraid? | Putin”