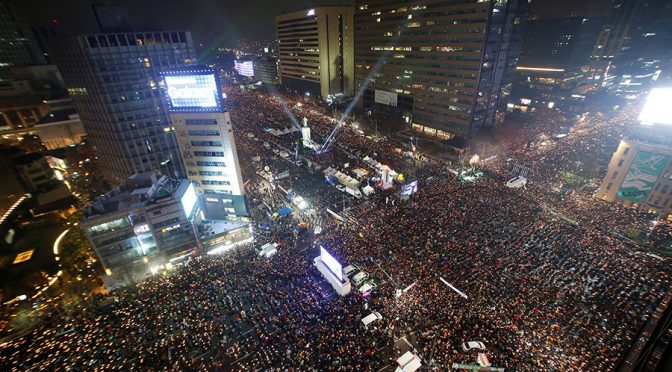 This is probably the highest number of protestors ever demanding a leader to step down, in recent memory. An estimated 1.5 million hit the streets in the capital of South Korea to demand the resignation of the US puppet President Park Geun-hye.

Park has been embroiled in an influence peddling scandal akin to that of the Clinton Foundation’s false philanthropy, when her friend Choi gained privileged access to Park’s administration in favor of at least two contributors to the latter’s foundation.
The only difference is that the South Koreans are quick to respond en masse.
https://www.youtube.com/watch?v=LLBTpWrzSQ0
Choi is linked to those who are moving towards the installation of THAAD missile system, which of course include the warmongers in the US State Department and war marketers of the military industrial complex.
Corporatist Bloomberg is calling those million demonstrators as mere “agitators”…

About 260,000 people turned up for the mass rally on Saturday, police said, making it one of the biggest demonstrations in South Korea’s history. The organizers asserted that as many as 1.5 million took part in Seoul and another 400,000 elsewhere in the country. The city square echoed the sound of “step down, arrest her” as the protesters, at one point, put out the candles they were carrying only to light it up again en masse.

“She promised a better life and now I know she meant it for herself,” said Seo Sung-kyung, a 42-year-old restaurant worker, as she walked with fellow agitators. “We’ve been fooled by her. We will not make the same mistake again.”

As shown above, Bloomberg showcases the 260,000 people, but the images of the massive demonstrations wouldn’t lie, of course.
Over 1mn march in Seoul to demand President Park’s resignation

About 1.3 million protesters have gathered in Seoul to demand the resignation of scandal-plagued South Korean President Park Geun-hye.
The protest’s organizers have said they expect that number to grow to 1.5 million before the end of the night, and that a further 500,000 are gathering at various protests around the country, Reuters reports.

The huge demonstrations, which began five weeks ago, are the largest in South Korea since the pro-democracy protests in the 1980s.
Park is embroiled in a corruption scandal involving her long-time confidante Choi Soon-sil, who has been indicted on bribery charges.
https://twitter.com/pearswick/status/802480348240048132
Prosecutors wish to speak to the president over allegations that she colluded with Choi to offer favors to businesses that contributed money to two foundations controlled by Choi.
The president has apologized twice on national television, but has so far resisted calls to resign. “It is hard to forgive myself and sleep at night with feelings of sorrow,” Park said of the scandal.
The leader of the main opposition party described the apology as insincere.
Opposition parties are attempting to put forward a parliamentary motion to impeach Park over the alleged collusion. The motion looks set to go to a vote in early December.
https://twitter.com/EvanstheAirwave/status/802488225147326464
As of 8pm Saturday, The Korean Times reported 1.3 million attended the largest protest in Gwanghwamun Square in central Seoul, where activists and musicians entertained the enormous crowd.
Police said around 1,500 civic groups were involved in organizing the massive rally and that, although all previous protests have passed peacefully, 25,000 officers were required to police the event.
https://twitter.com/EvanstheAirwave/status/802501491919491072
https://youtu.be/XvcNzKJnYNw
Earlier on Saturday, protesters marched within 200 meters of the presidential palace where Park resides, holding banners calling for her to step down.

https://twitter.com/lukepierce2015/status/802490396148236288
Park was elected in 2012, and her five-year term ends in February 2018. Her father Park Chung-hee ruled South Korea from 1961, when he seized power in a military coup, until he was assassinated in 1979. He reportedly remains popular with many older Koreans, as he was in power during a period of rapid economic growth.
The current president’s approval rating, however, has fallen to as low as four percent recently – a record low for South Korea’s elected presidents.
https://www.rt.com/news/368287-south-korea-protests-park/
There’s no doubt that the departure of Park will contribute to world peace, as the THAAD installation won’t be pursued anymore as the same people demanding Park’s resignation expressed strong indignation to.

On August 15 in Seongju, North Gyeongsang Province, 908 people sat in rows of chairs and waited for their heads to be shaved as an act of protest against the U.S.-South Korean decision to deploy the Terminal High Altitude Area Defense (THAAD) missile defense system in their hometown. Even Confucian scholars, who regard all parts of the human body as a gift from one’s parents and their hair as precious as their lives, sat stoically, willing to join the symbolic act against the deployment of the controversial weapons system. As the ceremony began and clumps of hair fell to the ground, onlookers gasped and even dabbed tears from their cheeks.

But the moment of anguish was brief. As soon as the ceremony concluded, everyone quietly tied their headbands behinds their heads and shouted “No THAAD!” as they headed to a demonstration.

https://youtu.be/dS_NhJuzVec
Although some small sectors of our society would like to claim credit for the spread of unrests around the globe, demanding real changes about the structures and personalities in their governments, we continue to attribute this Great Awakening to the internet infrastructure.
Without the World Wide Web, each revolutionary would be left to his own accord and not enjoy the moral support of the rest of the world.
There are only a few who can do that, and most of them were already dead.