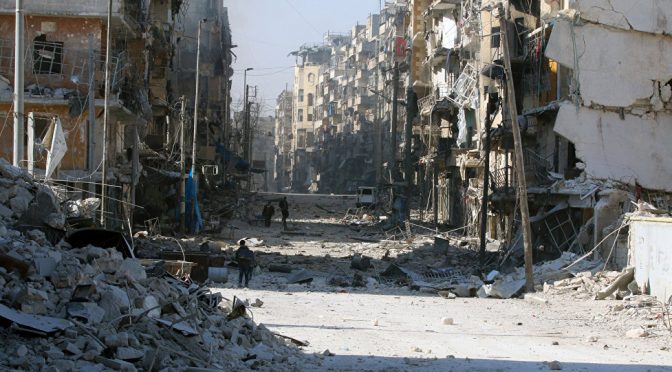 The final operation to free the city of Aleppo from CIA-trained Daesh terrorists has gained enough ground for the safe return of civilians.

The General commanded announced in a statement that several neighborhoods in the Eastern districts of Aleppo city have been freed from terrorist groups and are secure enough to leave, calling on residents of these districts to return home.

Hundreds of families started to return home after the army soldiers restored security in a major part of the Eastern district, including Hanano Housing Project.
It is expected that residents of other newly-freed districts return home soon.
The London-based militant-affiliated Observatory for Human Rights said on Saturday that the Syrian Army soldiers and popular forces took control of some 60 percent of Eastern Aleppo after driving the Jeish al-Fatah terrorists out of one more key district in the region.
“The army troops and popular forces continued their advance against militants in the Eastern part of Aleppo city and took full control of Tariq al-Bab district and restored security along a road connecting the city to the Aleppo International Airport,” the OHR said.
“The government troops have, thus far, captured 60 percent of the Eastern parts of Aleppo city,” it added.
http://en.farsnews.com/newstext.aspx?nn=13950914000318
The final battle for Aleppo started with an unrelenting barrage of Russian air power and Syrian Army’s district by district ground attacks supported by an undisclosed number of Russian tanks. These operations were briefly interrupted when the UN aid convoy was attacked and blamed on the Russians. During this period Russia was said to have destroyed a command center, killing dozens of MOSSAD/CIA advisers coordinating Daesh operations in the area, consequently angering the US State Department.
And as usual Joh Kerry asked his counterpart to institute a ceasefire for the sake of the civilians. Lavrov demanded that a separation of “moderate rebels and ISIS terrorists” be made. After 28 days of unilateral Russian-led ceasefire, all military operations was resumed when it was clear that the condition to identify the terrorists from one another wasn’t forthcoming.
It is during this time that safe passages were provided both for civilians fleeing the Daesh-controlled areas, and for the terrorists themselves who opted for amnesty. At first, only a few hundreds availed of this generous offer.
Now that it is pretty obvious that the War on Syria will not be sustained by the defeat of warmonger Hillary Clinton to Donald Trump, those Daesh terrorists availing of the government amnesty offer is rising steadily, prompting the hard core warmongers to rename their assets as Army of Aleppo.
Just two days ago,

A major part of 2,100 local militants and their families were transferred from Khan al-Sheih and Zakiyeh to Idlib on Friday and the remaining militants are due to move to Idlib on Saturday.
65 government’s green buses with 35 seats transferred the last group of militants from Western Damascus to Idlib.
The first group of militant left the region with 29 buses towards Idlib on Tuesday.
Arabic-language Anab Baladi news website reported that with the evacuation of militants from Khan al-Sheih and Zakiyeh, Western Ghouta has been practically emptied of militants, while two months ago the towns of  Darayya and al-Mo’adhamiyeh al-Sham were emptied from the terrorists.
Officials and locals said on Thursday that hundreds of terrorists in Damascus countryside left several regions in Western Ghouta for Idlib province in the last several days.
Nearly all the terrorists who had demanded to leave Western Ghouta were relocated together with their families from Khan al-Sheih, Zakiyeh, al-Moqilbeh and al-Tayeba towns to Idlib province.
The terrorists also destroyed all their military bases in these regions and after defusing the improvised explosive devices (IEDs) that they had planted in these regions handed over their heavy weapons and military vehicles to the government troops and moved towards Idlib.
The Syrian army’s devastating attacks and advances in Western Ghouta had forced the terrorist groups in Khan al-Sheih region to ask the government forces for a revival of the negotiations after they pushed the last round of peace talks into failure.
http://en.farsnews.com/newstext.aspx?nn=13950912000758
Although deserving of harsher retribution, the Syrian government prefers the recovery of more civilians being used as human shield rather than taking the lives of these Western paid mercenaries.
Western hypocrisy is further exposed when it is already feasible to send in humanitarian aid to the people of Aleppo, and not the UN, nor the United Kingdom, who were making the issue of the Russian failure to provide for the civilians’ welfare much earlier, are ready to put their money where their mouth is.
“The United Nations has not provided humanitarian assistance to the liberated parts of Eastern Aleppo, Syria, Russian Defense Ministry Spokesman Maj. Gen. Igor Konashenkov was quoted as saying on Friday by Sputnik.
“Unfortunately, there is no UN humanitarian relief in the liberated areas of Eastern Aleppo,” Konashenkov said.
He said that the ministry was unaware of some 30,000 residents who fled Eastern Aleppo receiving humanitarian assistance, as estimated by UN special envoy for Syria Jan Egeland on Thursday.
Konashenkov voiced hope that Egeland would “instead of unsubstantiated allegations finally embark on real work of providing humanitarian aid to the residents of Eastern Aleppo.
“The United Nations has stopped its proposals of humanitarian aid deliveries after Syrian government forces liberated 40 percent of Eastern Aleppo neighborhoods,” the Russian Defense Ministry said Friday.
“After the liberation by government troops of more than 40 percent of the city’s Eastern districts, home to about 90,000 inhabitants, all proposals for the delivery of humanitarian aid to Aleppo stopped,” Konashenkov said.”
http://en.farsnews.com/newstext.aspx?nn=13950912000793
In deep contrast to the real “fake news” outlets of the West, it is Russia that has sent over 150 tons of aid to Aleppo residents, and a demining contingent to clear the area of buried explosives left by the escaping terrorists.

ALEPPO (Sputnik) — “The cargo was delivered from Russia early in the week using marine transport bulk carriers. A total of 15 40-feet containers with humanitarian aid were delivered for those residents of Aleppo affected by the fighting,” the military’s communications center representative Eduard Goryunov told reporters.
A total of 280 tonnes of aid were delivered to Syria by the Russian convoy. The shipment included essentials such as rice, sugar, flour, canned foods and tea, according to the Russian center for reconciliation in the Arab country. The cargo was delivered to refugee camps on trucks.
Read more: https://sputniknews.com/middleeast/201612041048141815-russia-delivers-aleppo-aid/

Even at this late hours in the game, US State Sec. John Kerry is still forcing Russia to accept a compromise to leave Al Nusra in some parts of Syria.
Attempts to keep a part of Syria under the control of the Al-Nusra Front are unacceptable, Russian Foreign Minister Sergei Lavrov said at the second edition of the Mediterranean Dialogues international conference in Rome, on Friday, December 2.
“We have already compromised on some issues, as Staffan de Mistura has voiced a proposal to Nusra Front militants to leave eastern Aleppo without surrendering arms. We were against this idea but we agreed as we wanted to help save lives in Aleppo,” Lavrov said at the Rome MED — Mediterranean Dialogues 2016 conference.
According to Lavrov, a number of countries have rejected de Mistura’s proposal. “I think it was done because someone could benefit from leaving the eastern part of Aleppo under control of Nusra Front, which is, of course, unacceptable,” Lavrov stressed. Lavrov said that the current situation in Eastern Aleppo is the result of the failure to dissociate armed opposition from terrorists.
Read more: https://sputniknews.com/politics/201612021048106105-lavrov-syria-nusra-aleppo/
No matter how the Western media twist the story, the credibility of Russian operations in Syria can never be impeached.
However, even if the Russian-led coalition succeeds in ferreting out the last terrorist in Syria, that’s not a guarantee that they won’t return.
Barely two days ago, FarsNews reported the entry of “Hundreds of Terrorists Arrive in Western Aleppo Province to Deflate Pressure on Comrades in Eastern City Districts.”

TEHRAN (FNA) – A large number of terrorists have arrived in the Western part of Aleppo province from Idlib to launch a fresh attack on the provincial capital in a bid to decrease pressure on their comrades in the Eastern parts of Aleppo city that are losing ground every hour.
Hundreds of terrorists have come to the Western parts of Aleppo province to derail army’s advances and military gains in the city’s Eastern parts as the Syrian army troops have recaptured many districts in Eastern Aleppo city and tightened the siege on the militants in the region, the Arabic-language al-Masdar news website reported.
The Syrian reconnaissance units and drones have observed increasing military build-up of the terrorists in the region, causing government troops to stiffen their defense of the city, it added.
It also said that Jeish al-Fatah (Army of Conquest) terrorist group is expected to launch renewed attacks on the densely-populated government-held suburbs of western Aleppo in the coming days in a last-ditch effort to relieve besieged terrorists in Eastern Aleppo.
http://en.farsnews.com/newstext.aspx?nn=13950911000437
Judging from the size and build of these “terrorists”, these are well-trained army that only Turkey can provide in this particular route.
This latest Syrian incursion is in sync to the recent Erdogan pronouncement which caught Russia by surprise.
Erdogan has since backtracked on his statements.

Turkey’s military operation in northern Syria does not target any country or individual, and is aimed only at terrorist groups, President Recep Tayyip Erdogan said. He had earlier stated that Turkey was in Syria to “end the rule of the cruel Assad.”

“The aim of the Euphrates Shield Operation [in northern Syria] is not any country or person, but only terrorist organizations,” Erdogan said Thursday, as quoted by the Hurryiet Daily News.

“No one should doubt this issue that we have uttered over and over, and no one should comment on it in another fashion or try to derail it,” he added.

The latest comments come in contrast to remarks Erdogan made on Tuesday, when he said Turkey’s operation in Syria, launched in late August, aimed “to end the rule of the tyrant [Syrian President] al-Assad who terrorizes with state terror.”

This drew surprise from Russia, which asked for clarification of the remarks.

As it stands right now, Erdogan’s Turkey cannot be trusted fully. But its parliament has already approved the Turkish Stream project right after the controversial statement from Ankara.

The Turkish parliament has ratified a deal with Russia regarding the construction of a natural gas pipeline dubbed ‘Turkish Stream.’

The Grand National Assembly of Turkey voted 210 in favor of the agreement, with only seven opposing and six abstentions.

Will Russia pushes through with the project?
All wars waged primarily by the US-trained proxies, or that of its allies disguising as “moderate rebels” like the Turkish Army inside Syria as reported by the Iranian intelligence, will end only when the so-called American Patriots begin walking their talk.
The only way to end all wars of aggression around the world is to physically exterminate all war architects and vested interest groups holding up in corporate boardrooms and profiting hugely from these wars, and ultimately those in the great halls of power in the Vatican who are interested only in our absolute temporal and spiritual control through social engineering.
https://www.youtube.com/watch?v=qaoAp07m7lQ