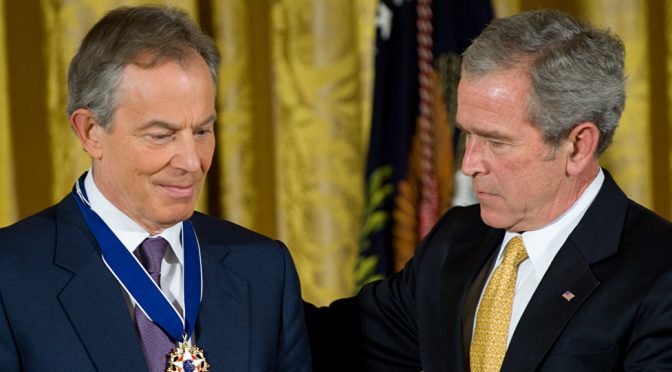 Western military operations in Iraq were based on the pretext that there was a government-imposed cruelty and weapons of mass destruction during Saddam Hussein’s dictatorship in Iraq.
The self-righteous wanted to correct it for the betterment of the Iraqis and for making the world a safer place.

There was no evidence that Hussein ever attack the United States through any proxy groups.
Prevailing evidence and whistleblowers’ account, however, point to the Central Intelligence Agency, Israeli MOSSAD, and Saudi Intelligence as the ones behind the WTC 9/11 controlled demolition which served as the pretext for the “War of Terror” preemptive military invasions in Afghanistan, Iraq, Libya and Syria, as a prelude to the attack against Revolutionary Iran.
The following videos are just a short peep into the outcome of the most recent attempt to recover Mosul from their own rogue terrorists.
https://www.youtube.com/watch?v=JVOdUPvKfIg
Warning: Extremely graphic.
https://www.youtube.com/watch?v=P-vAVBtNETE
Man against man, that’s the simplest yet gruesome objective of the true enemies of humanity behind the highest seat of power at the Vatican.
Even after a few upsets, their playbook continues to unravel, still. Is this what the Western population only capable of?

So long as the Bushes, the Blairs, Cheneys, Clintons and the Vatican Assassins are still roaming free, the carnage will continue undeterred.
Mass arrests green light, anyone?