The US president-elect Donald Trump promises to end all wars aimed at “regime change” on countries that the US “know nothing about.”
That’s one of those sure-selling campaign promises he had made, and it looks like he has no choice but to comply with it for now, with the Russian-led coalition’s victory in Aleppo City, Syria.

The United States is going to abandon its decades of policies promoting regime change in countries around the world, President-elect Donald Trump told a rally in Fayetteville in the US state of North Carolina. 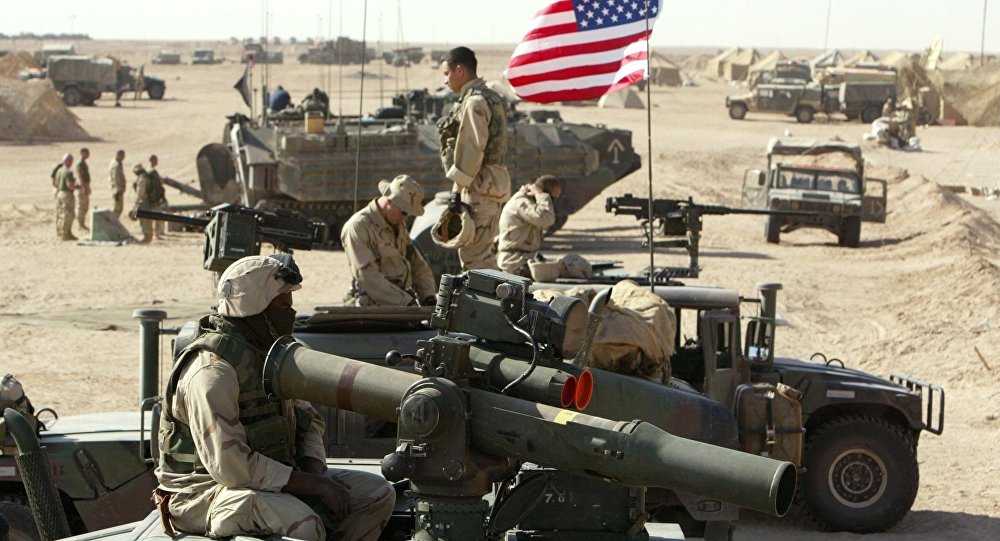 WASHINGTON (Sputnik) — Trump pledged to follow a policy of restraining US military force around the world rather than unleashing it.

“We will stop racing to topple foreign regimes that we know nothing about that we shouldn’t be involved with,” Trump said on Tuesday. “This destructive cycle of intervention and chaos must finally come to an end.”

The president-elect gave “a commitment to engage the use of military forces only when it is in the…interests of the United States. … We want to strengthen old friendships and seek out new friendships… … We seek harmony and goodwill among the nations of the world,” he said.
Trump said he would be guided by the lessons of history and that he believed in trust and mutual understanding among nations.

However, that qualified statement of “know nothing about” can easily be reversed with a pronouncement that “the intelligence community has gathered enough information” about this potential regime change target. So, let’s go to war whether via proxy, or otherwise.
Surely, the Dealmaker Trump can quickly muster his double-talking skills in a wink. But is this what the Americans really wanted when they voted him into office?
They want The Donald to just focus more on the economy, by revitalizing the manufacturing sector to stop importing goods from countries like China, India, Southeast Asia and Latin America, and it takes more than just twisting the arms of companies like Ford and Carrier to not outsource jobs elsewhere.
The rise of mom and pop’s, the crowdfunded startups, or the small and medium size enterprise should be encouraged and subsidized if need be. Certainly, they should be the ones being bailed out, not the bankers, nor the Navy, or the military industrial complex in general, this time around.
In fact, the US Defense Department has yet to explain where the $6 trillion went.

Donald Trump has pledged that he’ll lead the biggest U.S. Navy build-up since the Reagan administration, but the details on what’s likely to be an expensive and potentially decades-long effort remain to be seen.
Trump vowed to build the 350-ship fleet Republican defense hawks have long sought and reverse decades of fleet contraction which has yielded today’s battle force of 272 ships. And while the politics of large increases to the defense budget are dicey in the best of times, Trump sees a naval build-up as part of his agenda to create jobs, according to an October internal Trump campaign memo obtained by Navy Times.
The plan, if enacted, would aim to restore the Navy to a size it hasn’t been since 1998, and would mean tens of thousands of new sailor jobs. So far, it remains unclear what mix of ships the incoming administration wants to build more of, from $10 billion Ford-class carriers or $3 billion Virginia-class attack submarines to $500 million littoral combat ships, and how that fleet composition is connected to a strategic vision.
Trump’s camp believes generally that if you have more ships and more capabilities, you give the government more options in a crisis to deter conflicts and defeat enemies. That’s what top Trump advisers told Navy Times’ sister publication Defense News in October ahead of the election.
“I think at this point in history with the credibility of president of the United States eroded, were they to suspect that the United States is abandoning its defense spending,” said Sen. Jeff Sessions, R-Ala., in the interview. “It takes more than a speech to turn this around.”
“Trump’s plans are actually to build more ships and maintain a higher number of troops and aircraft. It will go a lot further than words to convince the world that we remain strong. It will help us to maintain the peace. ”
In the campaign memo, sent by a senior aide to Rep. Randy Forbes, an outgoing Virginia congressman and a top contender to be Trump’s Navy secretary, Trump promises to fund modernizing “a significant number of the Navy’s Ticonderoga-class cruisers,” some of which the Obama administration has sidelined for months or years until they get their modernization overhauls.
The memo also lays out a plan to invest heavily in new submarines and Arleigh Burke-class destroyers, and to revitalize the shipyards and get warships the maintenance that has been deferred in the last few years because of across-the-board budget cuts.
“Mr. Trump’s plan will require a significant partnership with a defense industrial base that has been strained by years of significant cuts to shipbuilding and ship repair,” the memo reads. “The nationwide infrastructure of yards, depots, and support facilities that created and sustained the World War II and Cold War-era Navy has been largely dismantled.”
The solution, the memo says, is to find places where old shipyards went out of business and have the ability to restart, an effort that would be led by the incoming Navy secretary. Trump also wants to build a robust training pipeline for skilled workers in the shipyards to increase the support base for the growing Navy.
Growing the fleet

Expanding the fleet is an idea that has gained currency both in the current administration, which is trying to boost the fleet to 308 ships up from 272, and among conservative defense proponents who have advocated for a much larger fleet.
The fleet could be grown to the size advocated by Trump, or at least close to it, by the 2030s, said Bryan Clark, a former senior aide to Chief of Naval Operations Adm. Jon Greenert and an analyst with the Center for Strategic and Budgetary Assessments.
To get there the Navy would need to start building three Virginia-class attack submarines per year and continue to pump out LCS and its follow-on frigates starting in 2019 to do low-end missions. The submarine build-up would need to continue even as the nation begins on the next-generation of ballistic missile submarines, which are estimated to cost at least $5 billion per hull.
The Navy, he said, could also accelerate the production of the aircraft carriers to get the fleet up to 12 by the 2030s. That buildup would get the Navy from an end strength of about 330,000 sailors today to more than 380,000 in Trump’s Navy.

Trump also promised to end the Federal Reserve. Let’s see how he’s doing so far in this regard.