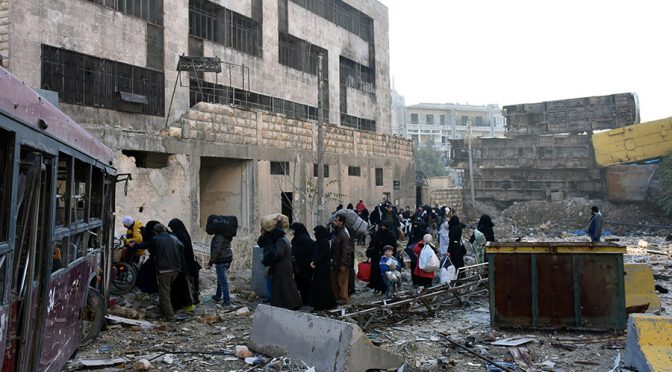 Over the past 48 hours, up to 50,000 people have been evacuated from East Aleppo, Russian Defense Ministry spokesperson Major General Igor Konashenkov has reported.
“More than 20,000 residents left eastern Aleppo in the first part of Saturday, and 1,217 militants laid down their weapons,” Konashenkov said.

https://youtu.be/M36Dcf6ykI4
“The Russian Center for Reconciliation, through humanitarian corridors near Karim El-Hun and Mahayar, has organized the evacuation of civilians from the eastern parts of Aleppo to the safe areas of the city,” Konashenkov added.
“We warn terrorists and militants of the so-called ‘moderate opposition,’ and also their patrons: Do not attempt any provocations, especially attacks on civilians leaving through humanitarian corridors,” the Russian Defense Ministry statement says.
Konashenkov also addressed those who, over the past few months, have declared their readiness to send humanitarian aid to Aleppo.
“Representatives of the US, UK, France, Canada, the European Union, and international organizations: Over the past two days, nearly 50,000 civilians have been evacuated by the Russian Reconciliation Center from the eastern parts of Aleppo. They are in need of the humanitarian assistance you promised. It is time to check the validity of your intentions.”
The statement added that the Syrian government now controls 93 percent of Aleppo, and the civilians who exited East Aleppo have been placed in special humanitarian centers where they are provided with hot food and medical help.
The Russian Reconciliation Center is monitoring the evacuation of civilians from the blocked districts round-the-clock with the use of drones.
https://www.rt.com/news/369869-syria-evacuation-civilians-aleppo/
As a backup plan to the 11th-hour Obama waiver of arms restriction to ““select vetted members” of opposition forces battling Syrian President Bashar Assad, the Pentagon is sending more commandos into Syria to sabotage the Russian-led recovery operations, or if that becomes impossible, to claim victory against ISIS, as they have been exposed to have done using footages of Russian airstrikes against ISIS oil smuggling convoys, last year.
US sending 200 more special ops soldiers to Syria – Pentagon chief

The US is sending 200 additional military personnel to Syria to help drive Islamic State (IS, formerly ISIS/ISIL) from Raqqa, US Defense Secretary Ash Carter said on Saturday.
Speaking in Bahrain at the Manama Dialogue conference on Middle East security, Carter said the 200, including special forces trainers, advisers, and explosive ordnance disposal teams, would join 300 US special forces already in Syria.
“These uniquely skilled operators will join the 300 US special operations forces already in Syria, to continue organizing, training, equipping, and otherwise enabling capable, motivated, local forces to take the fight to ISIL,” Carter said, as quoted by AP.
“By combining our capabilities with those of our local partners, we’ve been squeezing ISIL by applying simultaneous pressure from all sides and across domains, through a series of deliberate actions to continue to build momentum,” he added.
https://www.rt.com/usa/369856-us-syria-200-troops/
https://www.youtube.com/watch?v=ACpaNP9SXJo