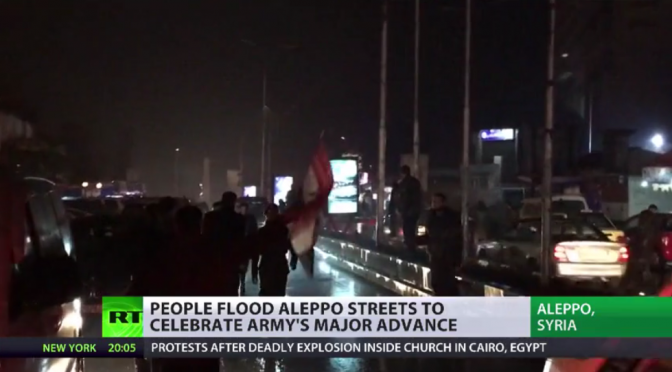 Aleppo streets have erupted in celebrations with people waving flags and shooting in the air as reports said the Syrian Army has taken control of the last militant-held areas in eastern part of the city, RT’s Lizzie Phelan reports from the ground.

While an official statement on the situation is yet to emerge from Damascus, a source close to Syrian Army headquarters told RIA Novosti that the army is on the brink of liberating the city.
“The army has begun clearing out the last terrorist stronghold in the Salaheddin neighborhood. The terrorists are firing back and are trying to use mortars,” the source told the news agency. “However, the complete liberation of Aleppo could happen soon, which will be officially announced.”
Meanwhile people have already taken to the streets of the war-torn city in celebrations, RT’s Lizzie Phelan reported from Aleppo.
https://youtu.be/EZh9x978xns
“All of downtown Aleppo tonight is filled with people celebrating,” Phelan said.
Singing and chanting, “for the Army and President Bashar Assad,” could be heard throughout the city, Phelan added. The reports were also welcomed by celebratory gunfire.
However, sounds of shelling could be still heard in the city, Phelan wrote on Twitter.
Earlier, Ahmad Saleh, leader of Syrian President Bashar Assad’s Ba’ath Party in Aleppo, stated in an interview to Sputnik that “Aleppo is free from terrorists,” noting that although some militants are still battling government forces in the Salaheddin neighborhood, they are “surrounded and will surrender soon.”
“There are only a few hours left until official announcement on Aleppo’s liberation,” he said.
Earlier on Monday, the Russian Defense Ministry announced that over 13,000 civilians had been rescued from militant-held parts of eastern Aleppo with the help of the Russian Center for Reconciliation in the past 24 hours. More than 700 militants had laid down their arms and surrendered to the Syrian Army, the ministry said, adding that Russian bomb disposal engineers were continuing to demine the neighborhoods in eastern Aleppo that had been freed from terrorists and rebel militants.
Meanwhile, Washington declined Russia’s proposal to delay a ceasefire in Aleppo for several days, with US State Department spokesman John Kirby calling the move “simply not acceptable.”
Washington keeps insisting on the immediate halt of all operations in Aleppo, which, Moscow argues, might enable terrorists to recuperate.

“Rather than accepting the US proposal for an immediate cessation, the Russians informed us that a cessation could not start for several days meaning that the assault by the regime and its supporters will continue until any agreement will go into effect,” he told a news briefing.
Following the recent talks on Syria in Geneva, Russian Deputy Foreign Minister Sergey Ryabkov said the parties failed to reach a ceasefire agreement “mainly due to the fact that the US insists on unacceptable parameters in terms of a ceasefire which would, in fact, provide full freedom of movement to those who the Syrian forces are currently fighting.”
Kirby noted that although “our [Russian and US] teams are still trying to work this out,” the negotiations are at an “impasse” at the moment.
Commenting on the situation in Aleppo earlier in the day, a leading voice on Syria, Director of the University of Oklahoma’s Middle East Studies Center, Joshua Landis, told RT that recapturing Aleppo from the terrorists was “not the end of the war, but a very important turning point.”
“Aleppo, of course, is the second-largest city in Syria, it’s the last major city that the rebels have a real toehold in. This is comparable, in a sense, to what’s going on in Iraq, where Mosul is under attack, the second largest city of Iraq, and the government forces are pushing out rebels who have occupied that city,” Landis said.
While people celebrated what appeared to be the end of more than four years of warfare in the city, the United Nations’ humanitarian adviser on Syria, Jan Egeland, put the blame on Russia and the Syrian government “for any and all atrocities” which, he claimed, are being committed by “victorious militias.”
Egeland’s claim was followed by a statement from the United Nations, which voiced “grave concern” about the allegations, while stressing the UN “is not able to independently verify these reports.”
https://www.rt.com/news/370084-aleppo-liberation-reports-celebrations/