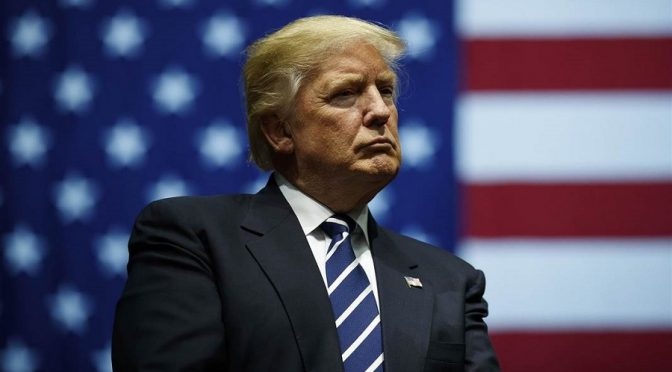 If Donald Trump is allowed to occupy the White House without any hitches, e.g. Electoral College sabotage, or a false flag operation to be blamed on Russia, prior to his inauguration, and he can deliver, within 6 months thereafter, a few signs of “Making America Great Again,”
… then perhaps we can say that all of these very high profile drama is for real, i.e. the American reformists really have the upper hand and are now running the show.

Otherwise, all of the showdowns we are witnessing today are just part of one big charade.

Trump’s Showdown with the White House

It is unprecedented for American democracy to blame a foreign power for influencing an election and use that as a tool to overturn the democratic process, experts told RT.
The White House has made some new allegations against President-elect Donald Trump over his supposed ties with Russia.
“It was the president-elect who refused to disclose his financial connections to Russia. It was the president-elect who hired a campaign chairman with extensive, lucrative, personal financial ties to Russia. It was the president-elect who had national security adviser on the campaign that had been a paid contributor to RT, the Russian propaganda outlet,” White House Press Secretary Josh Earnest told the daily briefing on Monday.
These claims come after the CIA accused Moscow of hacking the Democratic Party in an attempt to influence the US presidential election.

Trump’s Showdown with the CIA

The office overseeing all 17 agencies of the US intelligence community apparently doubts the CIA’s assessment that Russia intervened to help Donald Trump win the presidential election, as Reuters reports anonymous officials saying the allegation won’t be endorsed.
Three unnamed officials from the Office of the Director of National Intelligence (ODNI) told Reuters on Monday that their agency does not dispute the CIA’s findings, yet it would not accept them either.
“ODNI is not arguing that the agency (CIA) is wrong, only that they can’t prove intent,” one of the officials told the news agency. “Of course they can’t, absent agents in on the decision-making in Moscow.”
The CIA has not made its findings public, but the Washington Post reported on a secret assessment by the agency. It concluded that Russian intelligence hacked the servers of the Democratic National Committee (DNC) and Hillary Clinton’s chief of staff John Podesta to help Trump win the presidency.
The ODNI was formed to ease the bureaucratic obstacles between US intelligence agencies after the 9/11 terrorist attacks.

Trump’s choice of Secretary of State: ‘Time to ensure that change means change’

John Wight  @JohnWight1
There’ll be opposition to Trump’s pick for Secretary of State, but there’s a lot of momentum behind the anti-establishment president, and Rex Tillerson will be seen as a part of the anti-establishment future for the US, says political commentator John Wight.
US President-elect Donald Trump has picked Rex Tillerson, the head of oil giant ExxonMobil, as his Secretary of State.

He is to become the 69th Secretary of State and will also serve as a member of the National Security Council.
RT: Trump has picked Rex Tillerson as his Secretary of State, what do you think about his choice?
John Wight: Nobody can accuse Donald Trump of being a timid man. In the midst of the full-blown campaign to delegitimize his election as president emanating from CIA headquarters in Langley, Virginia, he has gone ahead and selected a man for Secretary of State, who not only has no prior political experience but has long-standing positive relations with Russia and with Vladimir Putin. It confirms that Donald Trump is sincere and maintains his intent on reestablishing relations with Moscow on positive foundations. And that all goes well in that regards….All in all, it is a very bold choice on the part of the president-elect and has certainly stirred some controversy in Washington. He is not an insider, Donald Trump himself is not a political insider. And he certainly seems sincere when he maintains that he intends to embark on a new direction when it comes to governing the US.
RT: Critics say Rex Tillerson has no political experience. What kind of reaction do you expect from US politicians?
JW: There is going to be a lot of hostility because he is going outside the Beltway. On the issue of experience, logic there takes that the experience that we’ve had until now has been very negative. Look at the world, look at the state of the world, given the role of the US under the Obama administration. The world is in chaos, relations between Washington and Moscow are the worst they have ever been since and during the Cold War apart from perhaps the Cuban missile crisis in 1962. And so Donald Trump quite rightly walks away from the wreckage of US foreign policy under his soon to be predecessor. It is time for a change. And it is time to ensure that change means change and it is not just rhetoric as we’ve seen so many times over the years when it comes to the US administrations.
RT: Tillerson’s nomination still needs to be approved by the Senate. How do you expect this to play out?
JW: It is not going to be smooth, that’s for sure. As I say, there is a full-blown campaign to delegitimize Donald Trump’s election with the allegation that Vladimir Putin rather than the American people, if you can believe that, was responsible for that election. Hopefully, by the time these hearings come to play all the heat has died down and calm heads are prevailing, and reason is restored in Washington. There is going to be opposition to this pick. But Donald Trump has a lot of momentum behind him. He was elected as an anti-establishment candidate. And Rex Tillerson will be seen as a part of that anti-establishment future for the US…

America today is divided right in the middle, and that is already a very significant improvement. Not too long ago, we saw how they were cheering on their infantry marching in the Middle East and Africa. Not too long ago, we saw how they applauded for every bomb hitting their intended targets, or otherwise. They are now beginning to question the wisdom behind all of those interventions.
The rise of non-preferred unorthodox personalities is vanquishing the Globalists’ hegemony that’s fostering divisions to feed their insatiable ambitions of conquest. This is just a preview of what is forthcoming.
We are beginning to hear loud acoustics of global rejection against a unipolar world dominated by the West. Soon, the people will be running the show for themselves, and not those Deep State clowns.
Multi-polarity is forcing its way through a unitary system of communication. One world working together to preserve different cultures, that’s the sweetest irony ever. That’s what makes this planet so beautiful.

6 thoughts on “Trump's Showdown with the Deep State”