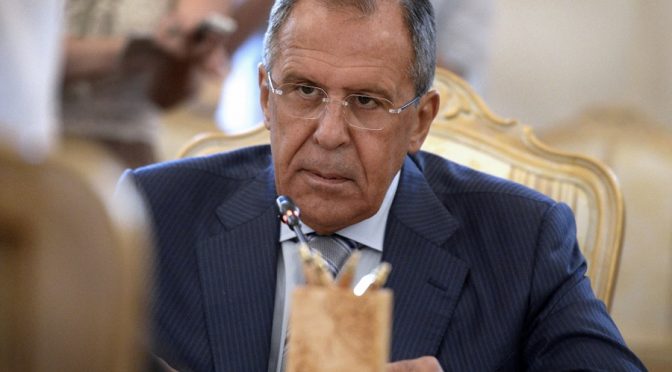 With patience running out, Russian FM Lavrov foregoes any iota of political correctness by saying what the rest of the world knows already , i.e. the US’ deliberate support for Daesh terrorists.

This is because of the blatant display of non-cooperation by the United States when, as the Syrian Arab Army were operating against Daesh in Eastern Aleppo, another contingent of CIA terrorists was sent to Palmyra to reoccupy the ancient iconic city earlier recovered with the help of Russian war planes.
The United States avoids attacking al-Nusra Front in every possible way, Russian Foreign Minister Sergei Lavrov said Wednesday.
The US position at talks with Russia on Syria might be explained by Washington’s wish to protect al-Nusra Front, the minister said adding that the talks with the US on Syria are ‘fruitless gatherings’.

“The contacts continue, but every time we agree on something, the US side backtracks from the agreements that have already been reached,” Lavrov said.

According to Lavrov, the US position at talks with Russia is explained by wanting to protect the Nusra Front militant group from attacks.

“They continue to avoid taking aim at Nusra Front militants in every way possible,” Lavrov added.

“Unlike Syria, nobody in Iraq, Libya or especially Yemen demands to immediately cease hostilities and implement a ‘regime of silence’ before the talks. But these demands for ‘silent regime’ are focused on one thing — to help terrorists to give terrorist a break, get the new weapons and armament. That’s what happened recently in Palmyra,” Lavrov said.

At the same time Russia hopes that the situation in Aleppo will be finally resolved in the next two or three days, Russian Foreign Minister Sergey Lavrov said Wednesday.

“Only the intervention of our Russian Aerospace Forces allowed the Syrian to stop this threat [Islamic State] with great difficulty and begin to push terrorists out. I hope that in the next two or three days the situation in eastern Aleppo will be resolved, we have created humanitarian corridors which were used by tens of thousands of civilians to leave, they have left,” Lavrov said.

The main goal in Syria at the moment is resolving the situation in Aleppo and returning the city to normal life, Russian Foreign Minister Sergey Lavrov said.
“The main [aim] now is to put an end to the tragedy of Aleppo, return the people to normal life, begin restoration of this ancient and, in fact, the biggest Syrian city,” Lavrov said.
Claims that Russia is forcing the civilian population to leave Aleppo are not true, Russian Foreign Minister Sergey Lavrov said.
“The US representatives in international organizations make public statements that it is a bad idea [to evacuate civilians out of Aleppo], that the Russians are forcing civilians out of Aleppo. Nobody is forcing anyone out. Those who want to leave are the only ones to leave,” Lavrov said.

What we have from the Russian side is more than just an expression of frustration about their partners‘ dirty tactics in Syria. More than anything else, this is a signal that the Russian side is moving towards another level of engagement against the Khazarian Cabal, i.e. no more kid gloves as far as terrorists and dishonorable geopoliticians are concerned.
And it’s not only FM Lavrov whose patience is running dry, but other personalities, too, in the United Nations are tired of the whole travesty.
https://youtu.be/R6utDs1b_TU
Even the EU’s supposed humanitarian aid to Syria were actually delivered to the terrorists.
All Western Aid for Syria Sent to Terrorist Groups, Not Civilians – Assad
MOSCOW (Sputnik) – Earlier in December, EU foreign policy chief Federica Mogherini said that the EU member states were behind all the humanitarian aid delivered to Syria.

“Actually, all the aid that any Western country sent was to the terrorists, to be very clear, blunt and very transparent. They never cared about a single Syrian human life,” Assad said commenting on a recent statement made by Mogherini.

He pointed out that the western countries did not help any Syrian cities surrounded by terrorist organizations.

“We have so many cities in Syria till today surrounded by and besieged by the terrorists; they prevented anything to reach them, food, water, anything, all the basic needs of life… So, this is the double standard, this is the lie that they keep telling, and it’s becoming a disgusting lie, no one is buying their stories anymore,” the Syrian president said.

Syria has been in a state of civil war since 2011, with government forces fighting Syrian opposition groups striving to overthrow the president. Damascus is also fighting numerous extremist and terrorist groups such as the Jabhat Fatah al Sham and the Islamic State, both outlawed in Russia. According to the United Nations, at least 300,000 Syrians have died since the beginning of the conflict.

Turning off that daily dose of MSM bullshit goes a long, long way in setting humanity free.
A complete boycott of the entire mainstream media will cripple the Khazarian Criminal Mafia’s access to the people’s mind where their power truly resides.