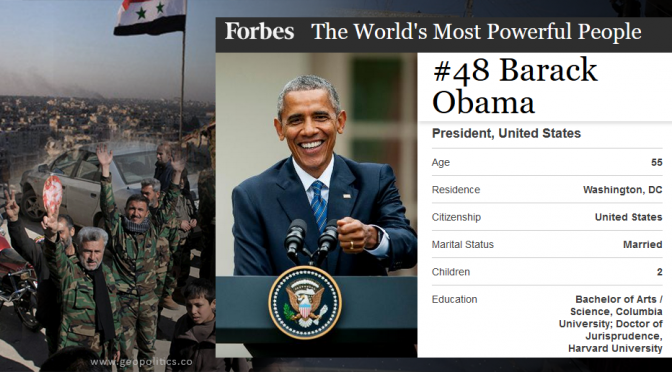 This is the elite’s expression of disgust over Obama’s poor performance in Syria, which led to their failed march against the highly prized Revolutionary Iran.
Otherwise, they wouldn’t have a need for twisting facts about the recently concluded US presidential elections whereby the Putin-friendly Donald Trump won by a thread, and both of whom are gracing the top 2 positions of the list.

Forbes has named Vladimir Putin the world’s most powerful person for a 4th year running, saying the Russian leader “continues to get what he wants” at home and abroad. Meanwhile, US President Barack Obama dropped dramatically from 3rd to 48th spot.
“Russia’s president has exerted his country’s influence in nearly every corner of the globe; from the motherland to Syria to the US presidential elections. Putin continues to get what he wants,” Forbes argued, adding that the Russian President’s “reach” on global affairs “has magnified in recent years.”

Picking up on the claims of Moscow’s alleged interference in the US elections, initially promoted by Hillary Clinton’s camp, as well as the claims of the US President-elect Donald Trump’s connections to Russia, the magazine went on to say that “in 2016 Russian hackers were accused of tapping into email accounts owned by members of the US Democratic Party in a bid to aid the campaign of Donald Trump, who has regularly praised Putin’s leadership style.”
Trump placed second on Forbes’ list, outdoing Angela Merkel, who thus dropped to the third place in the ranking.
However, it was the outgoing US President Barack Obama’s fall from grace in the magazine’s list that appeared to be the most striking.
Obama, who was placed third last year, dropped 45 places and found himself squeezed between Haruhiko Kuroda, the head of Japan’s central bank, and Khalid Al-Falih, the petroleum minister of oil-rich Saudi Arabia.
North Korean leader Kim Jong-un was ranked above Obama, retaining his 43th place.

We can be generous and say, Obama did have the good intentions for the world when he was still at the first campaign trail. But he found out later on that the seat at the White House is powerless, unlike the State Department and the CIA war rooms. He cannot outplay the Council on Foreign Relations.
This explains the constant flip flopping of the outgoing president.

Will a Donald Trump be anything better?
It remains to be seen. But as far as the controlled media and his own Republican Party are concerned, he is still an outsider, and the scores of appointments from Goldman Sachs roster are not pleasing them.
He needs to be antagonistic with Vlad Putin and Xi Jinping and let the Middle East and South China Sea burn.
See the complete list of Forbes World’s Most Powerful People here.