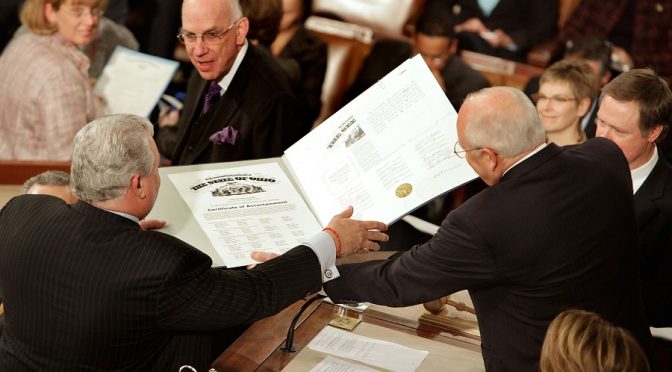 The battle for the White House will be decided tomorrow by the US Electoral College. Whoever designed this setup is imposing a great deal of risk upon the EC memberships, although they said that the body is there “as a safeguard against demagoguery. “

If there’s a Plan B for the Hillary Clinton campaign, it has to happen within the next 24 hours. Otherwise, a major shift of the US foreign policy can be expected early next year under the new Donald Trump government.

U.S. Foreign Policy and the Electoral College Vote: Towards a December 19 Surprise?

In a previous article entitled Constitutional Crisis, Movement to Undermine President-elect Donald Trump’s Accession to the White House? I focussed on the process of confrontation between the Trump and Clinton factions leading up to the Grand Electoral College Vote on December 19th.
While the Hillary Clinton faction supported by mainstream media propaganda is accusing Moscow of intervening in the US elections on behalf of Trump, they are  also intent upon shifting the Electoral College vote in favour of Clinton with a view to blocking president-elect Trump’s accession to the White House.
If this were to succeed, the U.S. would be precipitated into a deap-seated political crisis. It should be noted that this process is also coupled with  extensive anti-Trump protests across America, organized by the Clinton faction.
What is a stake: “are fundamental rivalries within the US establishment marked by the clash between competing corporate factions, each of which is intent upon exerting control over the incoming US presidency.”  (Ibid)

Rex Tillerson for Secretary of State Since the publication of  my earlier article, ExxonMobil Chief Rex Tillerson has been chosen by Trump to occupy the key position of  US Secretary of State.  This appointment potentially points to a major shift in US foreign policy (including an openly anti-China stance by Trump).  It is also points to rising divisions within the US establishment.  Tillerson not only has a good relationship with president Vladimir Putin, ExxonMobil also has  sizeable business interests in the Russian Federation including drilling projects in the Arctic, Black Sea and Siberia in partnership with Russia’s Rosneft. Needless to say these projects have been affected by Obama’s economic sanctions regime directed against Russia.
In response to this controversial appointment, the Neocon faction linked both to the bi-partisan “War Party” has promised to block the confirmation of  Tillerson’s candidacy in the US Senate.
It should be noted that Wall Street is also divided. Financial institutions are engaged in an internal war. Donald Trump announced on December 12 his choice to head the White House National Economic Council (NEC): the appointee is Gary Cohn, Goldman Sachs President and Chief Operating Officer. The NEC director occupies a central advisory position regarding the formulation of government economic policy. Ironically, Cohn is a Democrat and Goldman Sachs is known to have supported the Hillary Clinton campaign.

We are not dealing with “class conflict”. What is at stake are rivalries, confrontations and deep divisions within the elite structures with regard to America’s global military agenda.
While Hillary is the candidate of the US Military Industrial Complex, her hawkish foreign policy agenda does not directly serve the interests of a large segment of corporate America including a sizeable sector of the oil industry.
According to Karen Kwiatkowski, a retired Air Force lieutenant colonel, “Interventionism is a business and it has a constituency and she is tapping into it,…. She [Clinton] is for the military industrial complex, and she is for the neoconservatives.” Clinton reaped generous donations through the Clinton Foundation, rewarded  for the multibillion dollar contracts she approved in favour of the weapons industry while she was Secretary of State under Obama. These included a $29 billion arms deal with Saudi Arabia, for which she received a $10 million contribution deposited in  the coffers of the Clinton Foundation:

“The Saudi deal was one of dozens of arms sales approved by Hillary Clinton’s State Department that placed weapons in the hands of governments that had also donated money to the Clinton family philanthropic empire”
…Under Clinton’s leadership, the State Department approved $165 billion worth of commercial arms sales to 20 nations whose governments have given money to the Clinton Foundation, That figure — derived from the three full fiscal years of Clinton’s term as Secretary of State (from October 2010 to September 2012) — represented nearly double the value of American arms sales made to those countries and approved by the State Department during the same period of President George W. Bush’s second term.
The Clinton-led State Department also authorized $151 billion of separate Pentagon-brokered deals for 16 of the countries that donated to the Clinton Foundation, resulting in a 143 percent increase in completed sales to those nations over the same time frame during the Bush administration.
American defense contractors also donated to the Clinton Foundation while Hillary Clinton was secretary of state and in some cases made personal payments to Bill Clinton for speaking engagements. Such firms and their subsidiaries were listed as contractors in $163 billion worth of Pentagon-negotiated deals that were authorized by the Clinton State Department between 2009 and 2012. (See  (Business Times investigation, May 26, 2005)

The stakes behind these multibillion dollar contracts for Boeing, Lockheed Martin, Northrop Grumman, et al are exceedingly high. Hillary Clinton’s  military agenda constitutes a multibillion dollar bonanza for the weapons industry which could potentially lead to a Third World War. According to the New York Times,  Clinton (if she were to be elected, depending on the outcome of the College Electoral Vote) would “redouble efforts to punish and isolate Moscow for war crimes in Syria’s civil war and aggression toward Ukraine and other neighbors.” (emphasis added)

“Business is Not Good Without War”: Would a  Trump Administration result in Heavy Losses for the Defense Contractors?

Early this week (December 12) the “Shares of Lockheed Martin fell as president-elect Donald Trump tweeted that making F-35 fighter planes is too costly and that he will cut “billions” in costs for military purchases.” (CBC.ca, December 12, 2016)
In fact, “All defence stocks hurt by tweet”:

On December 12, Ten Grand College electors of whom only one is a Republican released an “open letter” to the Director of National Intelligence James Clapper requesting information about ongoing investigations on ties between Trump and “Russian government interference in the election.”  The letter (released on social   media was written by Christine Pelosi, the daughter of Rep. Nancy Pelosi.
The open letter “seeking the release of U.S. intelligence on possible foreign interference in the election” was also signed by the four Democratic presidential electors in New Hampshire.
Podesta describes the initiative as “bipartisan”, intimating that Trump is “sleeping with enemy”:

“Our campaign decried the interference of Russia in our campaign and its evident goal of hurting our campaign to aid Donald Trump,… Despite our protestations, this matter did not receive the attention it deserved by the media in the campaign. We now know that the CIA has determined Russia’s interference in our elections was for the purpose of electing Donald Trump. This should distress every American.”  (quoted by Politico, December 12, 2016)

The fake Moscow interference in the US elections is being used as a propaganda ploy to shift the Electoral College vote in favour of Clinton on December 19th.
So far these efforts seem to have failed. But there is more than meets the eye.
A December 19 surprise should not be excluded.
Both factions representing powerful corporate interests are working behind the scenes. The public is not being informed.
The Clinton faction will do its utmost to reverse the vote of the Electoral College.
The (multibillion dollar) stakes are high…
The political implications are potentially devastating.
The original source of this article is Global Research
Copyright © Prof Michel Chossudovsky, Global Research, 201
http://www.globalresearch.ca/u-s-foreign-policy-and-the-electoral-college-vote-towards-a-december-19-surprise/5561928
Why a shift in foreign policy can be expected under the new Trump government?
The US economy as it is today cannot afford to finance another war. This is the reason why they have to rely on third parties to do the fighting for them in the Middle East.

5 thoughts on “US Electoral College Vote: Towards a December 19 Surprise?”