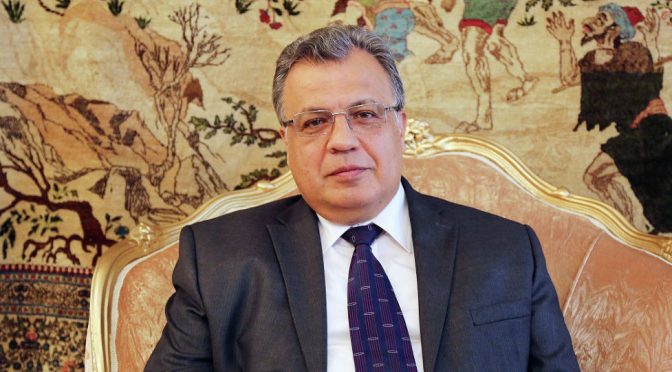 Russian ambassador to Turkey Andrey Karlov who was badly wounded in an armed assault in Ankara has died, Russian Ministry of Foreign Affairs said in a statement on Monday. Moscow now views the murder of Russian Ambassador in Ankara as a terror attack, the statement said.

Putin commits to get to the bottom of who actually gave the order to kill the ambassador, and assured the perpetrators that they will “feel the heat” of the impending measures which will be taken soon.
https://www.youtube.com/watch?v=BGRZspUHg08
Both Russia and Turkey declare that the murder was meant to drive a wedge between the two countries, and to derail the final resolution to the Syrian conflict.
https://www.youtube.com/watch?v=vFx2tG8E-zM

“We qualify what happened as a terror attack. We are currently in contact with Turkish authorities who are assuring us that a thorough, comprehensive investigation will be conducted.” Russian Ministry of Foreign Affairs spokeswoman Maria Zakharova said.
The attack took place at the opening of the “Russia through Turks’ eyes” photo exhibition.
Local TV reports that the killer had a Turkish police ID. He showed when entering the exhibition.
The Ambassador was not taken to the hospital immediately after the attack. It was reported that he received medical help on the site first and was rushed to the hospital after that.
“Today is a tragic day in the history of Russian Federation,” Zakharova said in a statement. “Today in Ankara, during a public event, Russian Ambassador Andrey Karlov was shot and, shortly after that, he died.”
Russian Ministry of Foreign Affairs said that it is receiving condolences from foreign colleagues. EU foreign policy chief Federica Mogherini was one of the first ones to offer her condolences, Zakharova said.
Andrey Gennadievich Karlov was born in 1954. He was appointed Russia’s Ambassador to Turkey in 2013.
Russia demands that the event be recognized as an act of terror, while the UN has condemned the attack.
According to Turkish security officials, the gunman who allegedly shot the Russian ambassador was a former police officer working in Ankara, but was not on duty when he shot the ambassador. Recent reports suggest that the former Turkish law enforcement agent has been identified as Mevlüt Mert Altıntaş, a member of the Ankara Riot police born in 1994 who worked in the Turkish capital.
https://twitter.com/RudawEnglish/status/810925824799019008
The gunman shouted, “Don’t forget about Aleppo, don’t forget about Syria, Allahu Akbar…”
Reports have also emerged that the gunman yelled, “We die in Aleppo, you die here.”
https://sputniknews.com/middleeast/201612191048754603-russian-ambassador-ankara-dies/
İbrahim Melih Gökçek, the mayor of Ankara, speculated that Altıntaş may have been a member of a terrorist organization and related to Fethullah Gulen.
https://twitter.com/SputnikInt/status/811204510169198592
Shortly after the attack, the home of Altıntaş was raided by Turkish police, Rudaw English reported. His mother and sister have been detained by police as the search of the house continues.
Read more: https://sputniknews.com/russia/201612191048756669-gunman-turkey-identified/

Earlier…
Russian ambassador to Turkey Andrey Karlov has been badly wounded in an armed assault in Ankara, Russian Ministry of Foreign Affairs said on Monday.
What would the CIA, or the US State Department, hope to accomplish by doing this?
A few weeks ago, US State Department Spox John Kirby threatened Russia with “more body bags, attacks on Russian cities”…
https://youtu.be/6wRXncGsktE

https://twitter.com/Hurriyet/status/810879770942697472
The attack took place at the opening of the “Russia through Turks’ eyes” photo exhibition, Turkish NTV news channel reports.
Eyewitnesses say that the Ambassador was shot at.
“The ambassador was delivering a speech at the opening of the exhibition, and suddenly, during his speech, there was a shriek ‘Allah Akbar!’ — and someone started shooting,” an eyewitness told RIA Novosti. “It is likely that the attack was aimed at the Ambassador because after the shots the assailant let those present escape the room.”
Correction: Karlov was not taken to the hospital after the assault, he is getting aid at the scene of shooting. The ambassador is reported to be in a critical state.
Russian Ministry of Foreign Affairs has confirmed the information that Russian Ambassador suffered a gunshot wound. The official statement noted that Russia is in contact with Turkish authorities regarding the attack.
Soon after the attack, Turkish Interior Minister Suleyman Soylu arrived at the site.
The assailant is reported to have been eliminated, according to Turkish TV.
https://twitter.com/PDChina/status/810917271753396225
https://twitter.com/ASLuhn/status/810891213566050305
https://twitter.com/Hurriyet/status/810888677228482560
https://twitter.com/Hurriyet/status/810888762511294464