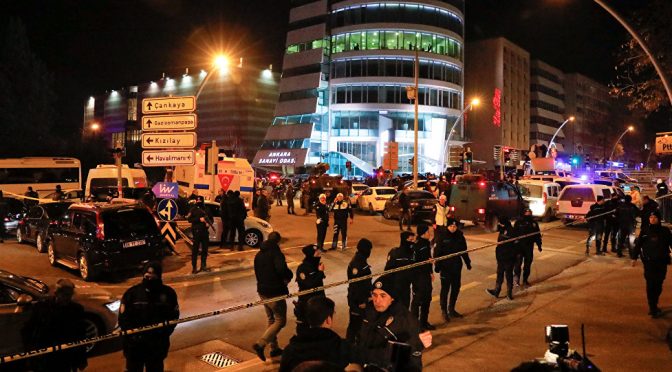 Yesterday’s terror attack in Berlin and the Russian ambassador’s assassination in Turkey, both of which coincided with the casting of the US Electoral Votes to make official Trump’s presidential poll victory last November, can be seen as some last ditch attempts at distracting the global attention away from what has been just a ceremonial exercise.

The Donald Trump campaign was expecting that a carefully planned disruption might take place to derail him from assuming the seat in the White House.
Today’s Electoral Vote surprise came in the form of “four Democratic electors in Washington State breaking ranks — with three casting ballots for former Secretary of State Colin Powell, and one for Native American activist Faith Spotted Eagle.”
Republican Trump secured 304 Electoral Votes following the Texas vote (with 2 faithless electors), officially securing the presidency of the United States.
https://twitter.com/realDonaldTrump/status/810996052241293312
However, what could have been a festive mood within the anti- establishment crowd, who believe that Trump is real and worth a try, was muted with the murder of the Russian ambassador to Turkey, Andrey Gennadievich Karlov.
Indeed, for leading Global Reformists out of the regressive Khazarian control and influence, Russia continues to pay the highest price. The enemy is visibly in a panic right now that a real threat of completely losing its power does exist.
A snapshot of who represents the Empire in America was published just before the murder of Ambassador Karlov.

Putin Right on Role of Clinton-Bush Dynasties Dominating US Politics 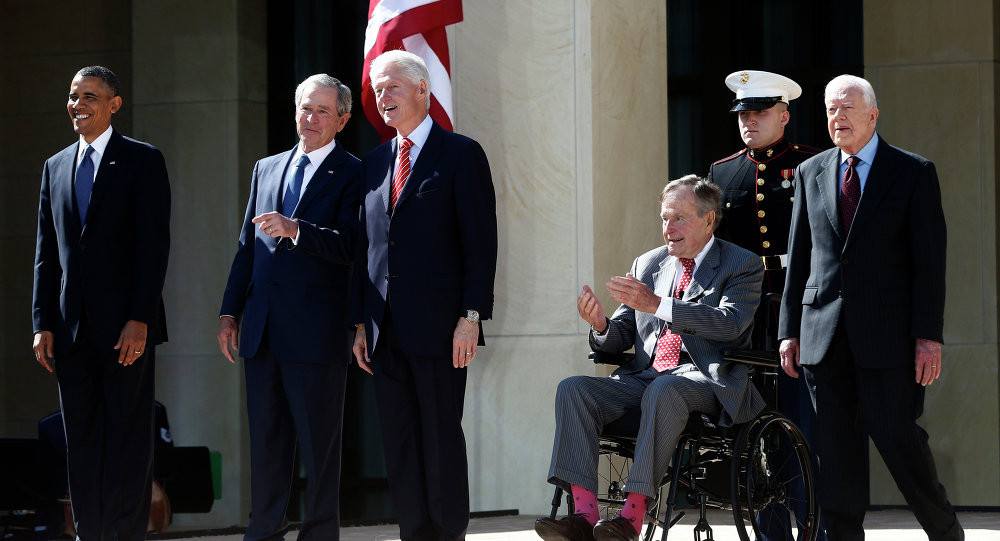 Russian President Vladimir Putin was accurate in his assessment of the durability of the political establishment in the United States, but sometimes the advantages of wealth and dynasty can backfire, former European Union adviser Paolo von Schirach told Sputnik.
WASHINGTON (Sputnik) — In his annual nationally televised question and answer broadcast with the Russian people on Thursday, Putin expressed his doubts about the possibility of removing power from established circles in the United States, citing the Bush and Clinton political dynasties as examples.
“Yes, it is true that in America politics has become a ‘family business’, in at least some instances. Of course the Bush and Clinton ‘dynasties’ seem to prove Putin’s point,” Schirach, president of the Global Policy Institute and a professor of international relations at BAU University, said on Friday.
… President Putin was also accurate in his observation because the very structure of the US political system was strongly weighted against change, renewal and reform by electing new people with different ideas to the two chambers of Congress, Schirach maintained.
“The real problem in American politics is that the system at the congressional level — mostly in the House of Representatives, but also in Senate elections — strongly favors incumbents,” he stated. “This prevents the renewal of the national leadership. And this is a real issue.”
This electoral dynamic had created an almost unmovable political establishment composed of perennially re-elected House and some Senate members, Schirach concluded.
https://sputniknews.com/politics/201604161038109508-putin-us-politics-dynasties/
Most people in Washington, DC have gotten used to the non-confrontational decorum of post-Soviet Russia, so that when the latter’s media networks took a more proactive stance in recent years, the same Khazarian stooges became more restless than ever.
The secrecy which served as the basic foundation of their corrupt enterprise has been shattered for all the mainstream audience to see. But,

“That’s not freedom of speech anymore, but fake news. No, that’s Russian interference in our domestic affairs. They’re hackers at the highest level.”
“Look, the Russians are coming. They must be stopped before they start killing our children.”

So much for the lying bastards who even have the gall to call themselves the Fourth Estate.

Anti-Russian Hysteria in Washington Is a Byproduct of Imperial Decline

by John Wight
Just pause to consider where we are for a moment. We have lame-duck US president, in the shape of Barack Obama, threatening Russia with retaliation for alleged Russian cyber-hacking and interference in the US elections, while at the same time the man who is about to replace him in the White House in just a few weeks, Donald Trump, has been refuting those allegations.
https://youtu.be/JjadEonrXWA
What does this say about the level of polarization and disunity that has become the new normal in Washington? It describes political paralysis and a political class thrown into disarray by its inability to come to terms with a world that has changed — i.e. one that is no longer theirs to dominate and control. It is a truth, a hard truth, that many in Washington are clearly unable to grasp, plunging normally rational human beings into paroxysms of anguish and despair.
There is simply no other explanation for the torrent of anti-Russia paranoia that has been unleashed since the US presidential election on November 11. Indeed, it has now surpassed a torrent and to become a full-blown flood, wherein everything from Trump’s victory to Brexit to the weather is being blamed on Moscow. It is what democracy looks like when it is tested and fails that test.
Not that this is a defense of Donald Trump. My own preference for president, speaking as a non-US citizen, was Bernie Sanders, the only candidate whose anti-establishment principles on the side of working people are authentic, inclusive, and eminently more credible than Mr Trump’s. But then Sanders was denied the nomination by a Democratic Party machine that supported Hillary Clinton’s nomination from the outset, and which approached the presidential election as courtiers at a coronation rather than officials running an impartial primaries election process. It is their inability to deal with Clinton’s defeat at the hands of a billionaire reality TV star with no prior political experience that lies at the root of the current crisis.
On the allegations of hacking, a group in the US calling itself Veteran Intelligence Professionals for Sanity (VIPS) publicly disputes them. The group’s spokesman, Bill Binney, a former high level intelligence analyst with the United States National Security Agency (NSA), believes that contrary to the claim that the emails released by WikiLeaks came via somebody hacking the DNC, they were instead leaked from within Washington.
In a recent open letter, six retired US intelligence officials write:

“The evidence that should be there is absent; otherwise, it would surely be brought forward, since this could be done without any danger to sources and methods. Thus, we conclude that the emails were leaked by an insider — as was the case with Edward Snowden and Chelsea Manning. Such an insider could be anyone in a government department or agency with access to NSA databases, or perhaps someone within the DNC.”

Britain’s former ambassador to Uzbekistan, Craig Murray, has also stated that the so-called Podesta (John Podesta, Clinton presidential campaign chairman) emails were leaked from within Washington, and Wikileaks founder Julian Assange maintains that they have not come from Russia or have anything to do with Russia.
Thus far the CIA has failed to produce any compelling evidence for its allegations that Russia hacked the DNC and interfered with the US election. However there is a vast trove of evidence that the CIA, throughout its history, has interfered with countless elections, subverted the political systems of other countries, and worked to bring down sovereign governments all over the world. For a comprehensive account of this ignoble history and record, the work of US author and historian William Blum is unsurpassed.
History reveals that the decline of empire is a messy affair. The ideological and psychological shock suffered by its proponents is monumental, challenging received truths and cultural values without which they are left rudderless and spiritually bereft. This is what we are witnessing now when it comes to the decline of the empire of our time, emanating from Washington.
As such, the challenge for the rest of the world is managing that decline, the psychological and ideological damage incurred, to ensure the process of transition from unipolarity to multipolarity is as smooth as it can possibly be under the circumstances.
Trusting not to neoconservatives and their ideological bedfellows but to the American people is key at this point. And it is here where we discern hope. For despite the attempt to blame Russia, China, Iran, etc., for the ills of the world, more and more Americans are waking up to the fact that their enemy does not lie overseas but at home in the shape of a ruling class that collectively has been responsible for obscene inequality and iniquity at home, while at the same time crises, conflict, chaos and instability abroad.
As the Italian Marxist Antonio Gramsci wrote:

“The old world is dying, and the new world struggles to be born; now is the time of monsters.”

Outgoing US president, Barack Obama, should take note.
https://sputniknews.com/analysis/201612191048739772-russia-hysteria-west-decline/
Well, now they shouldn’t mess up with the First Estate,  i.e. We, the People of the World.