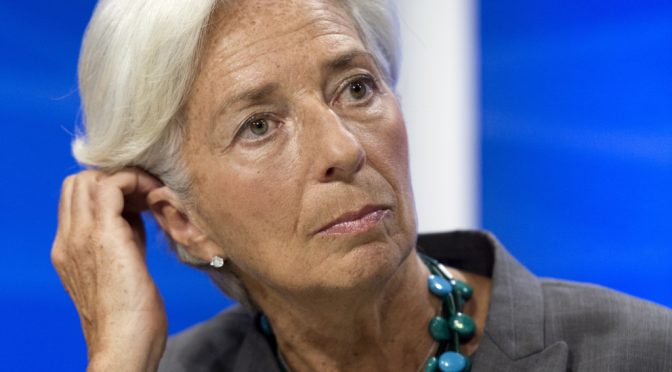 France’s Court of Justice of the Republic on Monday found Christine Lagarde, International Monetary Fund (IMF) chief, guilty of negligence over a state payout in 2008, but chose not to punish her as all criminals must undergo.

Ruling relates to Lagarde’s role as French finance minister; IMF board expresses confidence in her…
The so-called “Affaire Tapie” was rooted in Mr. Tapie’s complaint that Crédit Lyonnais—parts of which were later transferred to CDR—had defrauded him in the early 1990s. Around the same time, Mr. Tapie dabbled in politics, serving briefly as a minister in the government of Socialist President François Mitterrand. In 2007, however, he angered left-wing politicians by publicly supporting the campaign of center-right leader Nicolas Sarkozy.
As finance minister under Mr. Sarkozy, Ms. Lagarde gave the green light for the arbitration procedure that ultimately ordered CDR to pay €405 million ($423 million)—a sum that includes forgone interest payments plus “moral damage” of €45 million—to Mr. Tapie and his company.
The court found Ms. Lagarde not guilty of negligence for her role in sending the case to arbitration. But it said she was guilty of negligence for not opting to seek an annulment of the decision.
… “She will be a little—slightly—less credible talking about corruption, but the fund can talk about corruption without her,” said Ted Truman, senior fellow at the Peterson Institute for International Economics in Washington.
http://www.wsj.com/articles/french-court-finds-imf-chief-christine-lagarde-guilty-of-negligence-doesn-t-issue-jail-sentence-1482157757

“I have been held negligent but without penalty, without sanction, without registration of the decision. I am not satisfied with it, but there’s a point in time when one has to just stop, turn the page and move on.” – Ms. Lagarde said in Washington

“Move on” — notably the favorite phrase they use whenever suitable.
There are others like her in the system which continue to defy our common understanding of justice, i.e. Hillary Clinton, who also invoked the “move on” clause during one of the Benghazi hearings that she attended.
The only way that the people can understand why that is always the case is to dig deeper into the temples where these priests and priestesses congregate and plan what’s good for the Goyim.
So, why would the court chose not to impose any penalties on criminal Lagarde?
In the case of the IMF Chief Christine Lagarde, a different set of rules applies. Although, the crime was committed before her incumbency at the IMF, the immunity articles which protect those working in The Fund are very broad and “inviolable.”
From our article, “The Articles of Agreement that Should Boil Everyone’s Blood,” which features the IMF Articles of Agreement which says, among others,…

Section 8. Immunities and privileges of officers and employees

All Governors, Executive Directors, Alternates, members of committees, representatives appointed under Article XII, Section 3(j), advisors of any of the foregoing persons, officers, and employees of the Fund:

(i) shall be immune from legal process with respect to acts performed by them in their official capacity except when the Fund waives this immunity;

(ii) not being local nationals, shall be granted the same immunities from immigration restrictions, alien registration requirements, and national service obligations and the same facilities as regards exchange restrictions as are Art. IX, Sec. 3–8 IX. Status, Immunities, and Privileges accorded by members to the representatives, officials, and employees of comparable rank of other members; and

(iii) shall be granted the same treatment in respect of traveling facilities as is accorded by members to representatives, officials, and employees of comparable rank of other members.

Here’s the original copy of the Articles of Agreement of the International Monetary Fund downloaded directly from the IMF website.
Download from:

The same rules of immunity even for high stake crimes need not apply to the rest of us. Incidentally, we agreed to the foregoing through our own representative governments, being co-signatories to the same Articles of Agreement governing the IMF.
Aside from these immunities, they are also immune from paying taxes on all payments while working for the usurious Fund.
Above all, ignorance of the aforesaid agreement and all rules governing the slavery system excuses no one.

Nations are strip-mined of their material wealth and resources, sold off to private hands on the cheap. Democratic values are ignored, countries turned into debt-entrapped backwaters.
Middle class societies are destroyed. Workers lucky enough to be employed become wage slaves, entrapped in rotten jobs. Western moneyed interests benefit at the expense of ordinary people.
Bloomberg News reported Lagarde’s negligence conviction “by a Paris court over her (mis)handling of a multimillion-euro dispute during her time as France’s finance minister nearly a decade ago.”
Earlier I explained her $300 + million arbitration order benefitted tycoon Bernard Tapie, not the French government she was sworn to serve as finance minister, violating her fiduciary duty.
French Court of Cassation (its highest court of appeal) Attorney General Jean-Louis Nadal ordered the Tapie dossier made public, including allegations that “Lagarde had indeed acted in a way to defeat the law…to help Tapie gain a favourable decision, against an earlier” appeals court judgment for the state.
In pronouncing guilt on Monday, Judge Martine Ract-Madoux said Lagarde won’t be fined or imprisoned, the ruling against her little more than a slap on the wrist.
How it tarnishes her reputation remains to be seen. According to Bloomberg, “(t)he Washington-based (IMF) said it would meet shortly to consider the verdict.” In February, she was given a second five-year term as managing director, starting on July 5.
Given her service to Western moneyed interests, it’s unlikely she’ll be forced to resign. A February press release announcing her reappointment said “the Board praised Ms. Lagarge’s strong and wise leadership during her first term.” Why spoil a good thing by sacking her.
In July 2011, she replacing Dominique Strauss-Kahn, forced to step down over phony rape charges later dropped. He was targeted for backing more responsible IMF policies, and fear that one day he might become French president.
He called Troika Greek bailout terms “profoundly damaging…a “crippling situation,” adding:
In counting our billions instead of using them to build, in refusing to accept an albeit obvious loss by constantly postponing any commitment on reducing the debt, in preferring to humiliate a people because they are unable to reform, and putting resentments – however justified –  before projects for the future, we are turning our backs on what Europe should be. We are turning our backs on…citizen solidarity.
“Lagarde…was cleared of another count related to her initial decision to enter into the arbitration agreement,” Bloomberg explained.
She’s a club member in good standing despite her Monday conviction, a neoliberal hardliner, chosen to serve Western monied interests at the expense of beneficial social and economic change.
Stephen Lendman lives in Chicago. He can be reached at [email protected].
http://www.globalresearch.ca/imf-head-lagarde-found-guilty-of-criminal-negligence/5563713