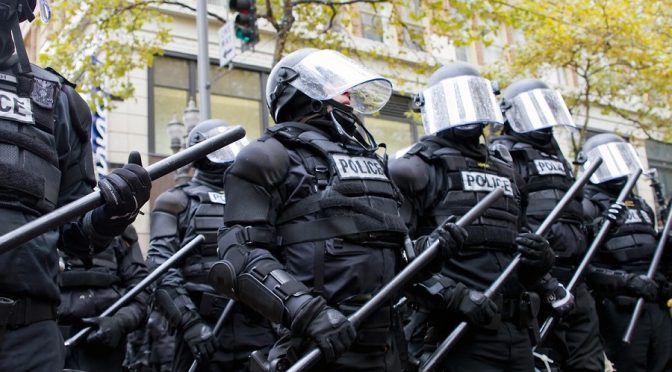 Despite the rise of populism and a resurgence of American values, it has become more dangerous than ever to speak out. A new war on patriots has begun…

by Mac Slavo
In the visible future, Americans may see real tyranny take hold at home. The deep state, which operates both inside and outside of the official channels and independently of presidents and Congress, is waging a war against the constitutional rights, financial independence and the rugged individualism that has allowed freedom to exist to a certain degree in this country.

Speaking out as a patriot – despite the sense of victory in the people with the election of Donald Trump – has never been more dangerous.
This is the time when people will start to disappear. But it begins digitally….

While a major event is likely to take place in the next several years that could justify red level action on the ground to raid, round-up and re-shelter patriots and prominent voices in the alternative media may well take place in an American future – and has historically taken place in several notable regimes – it is more likely to happen online.

The forum of social media on the internet is not only shutting down outlawed opinions, but it is also re-educating the populace about what is acceptable to think. It is doing more to reprogram the mind than TV ever could. Algorithms for censorship mean that dissent will no longer be heard by many people. Mere association with outlaws and undesirables will hurt social and credit scores, and society is likely to cluster around redundant groups of safe speech and like viewpoints reinforced by a narrow band of news coverage.

You will see individuals in the news who are labeled as domestic terrorists; some of them will have done nothing more than spoken out against the system. The NDAA and, now, the
BLEACHING PUBLIC OPINION
Wash and rinse, concentrating down certain artificial attitudes, and bleaching out the undesirable ones. This has been an objective of the CIA, the State Dept., US AID and other government agencies for decades now.

Television programming, radio broadcasts, leaf-letting and other forms of propaganda are disseminated, both here and at home, and routinely carry pro-state messages. The coordination of public thought and discourse is alarming.
Here’s a theory: Maybe the TV will only show you what you’re allowed to believe. Political pundits already have a name for this concept: the Overton window.
A shift in the “window of discourse,” known as the Overton window determines what the public will accept. Will any political question, the two opposing viewpoints, and all the middle ground, will fall within the accepted plane of thought, no matter how vehemently there are cries of right or left, yes or no, less or more, tyranny or freedom. Wikipedia summarizes:

The Overton window, also known as the window of discourse, is the range of ideas the public will accept. It is used by media pundits. The term is derived from its originator, Joseph P. Overton (1960–2003), a former vice president of the Mackinac Center for Public Policy, who in his description of his window claimed that an idea’s political viability depends mainly on whether it falls within the window, rather than on politicians’ individual preferences. According to Overton’s description, his window includes a range of policies considered politically acceptable in the current climate of public opinion, which a politician can recommend without being considered too extreme to gain or keep public office.

Because the public perceives that it has been offered multiple choices, individual members of the public take stake in whichever view – confined within that acceptable window – best fits theirs. But they lack perception of the shifts in direction that window has taken; they have forgotten all previous attitudes – or regard them as taboo or ridiculous.
Right now, the biggest shift in the Overton window is happening on social media. Facebook and Google are leading the charge, hiring new hit teams to flag and censor news.
Because it all works on algorithms, the “window” effect becomes literal, rather than just figurative. News and information that falls outside of the acceptable range of view is simply not seen by the public – it is hidden from view, and omitted from search results.
Yet increasingly, Facebook accounts, Google credentials and etc. are needed for identification, transactions, etc. Banking and commerce is leaning towards becoming completely digital. Cash controls have begun in the United States and abroad.
This is where prepping, patriotism and independence has begun to be outlawed. Politically-correct speech is now just programmed into the system.
Electricity and data are now intertwined. Smart meters, smart grids and smart appliances go together and make tracking built in. The concept of digital footprints expands…
OUTLAWING DISSENT & INDEPENDENCE
In the next two decades – independence will be ferreted out. While a truly free spirit can never be crushed, they are making it harder than ever to go rogue in occupied America.
Living off the grid has been criminalized in many places, and strongly discouraged in most, with codes leading to conformity in the real world. True individuals are few and far between, but the struggle goes on.
Pockets of resistance continue to be met with public relations problems and threats of government raids. Malheur and Bundy Ranch have offered a glimpse into what may be ahead; Waco and Ruby Ridge provide examples from the past.
Patriots will endure… but in the coming years, they will either work inside the system – where hackers and whistle blowers have become traitors – or operate outside of its boundaries altogether. Patriots will need people on the inside and outside.

Individuals will be rounded up through police encounters; speech will flag people as dangerous, and arrests will be made in conjunction with domestic disputes, nosy neighbors, false reports, etc. Database “pings” will pre-mark dissenters for detention or prison.
Patriots have been marked for suspicion, and so have the symbols that express those positions. Beware in how you are seen, particularly, if there is a need to stay below the radar and avoid detection. Unless you have shielded your identity, your past actions and words could give you away.
The system places patriots under suspicion, and closely monitors independent, unaccountable actions… because they are control freaks.
A COMING CIVIL WAR
A civil war is being created as a response from the system to maintain long-term dominance through banking and information management. 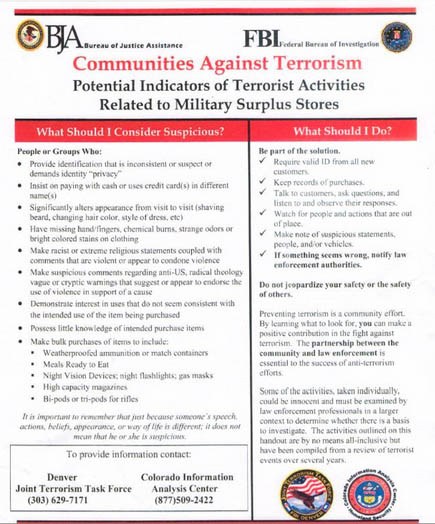 Meanwhile, they will be coming for those who are speaking out. The only question is when.
As Michael Snyder reported:

According to a senior government official who served with high-level security clearances in five administrations, “There exists a database of Americans, who, often for the slightest and most trivial reason, are considered unfriendly, and who, in a time of panic, might be incarcerated. The database can identify and locate perceived ‘enemies of the state’ almost instantaneously.” He and other sources tell Radar that the database is sometimes referred to by the code name Main Core. One knowledgeable source claims that 8 million Americans are now listed in Main Core as potentially suspect. In the event of a national emergency, these people could be subject to everything from heightened surveillance and tracking to direct questioning and possibly even detention.

War will be asymmetrical, and physical conflict will be balanced with cyber engagement of public perception.

As resistance continues, the liberty contingent will have to be wary of an evolving threat matrix that seeks to use technology as a means of control.
Above all, recognize that the system will phase in their control gradually – it is this seamless shift of perception, stretched out over time, that is its greatest weapon.
HOW TO DISAPPEAR COMPLETELY
Identity protection will be crucial, and use of technology should reflect the state of the art of surveillance.
If you want to get yourself totally outside of the system, and stay there, it will be increasingly difficult to do, but not impossible.
Sargent Survival at BeSurvival.com has some very solid tips for making this a reality. Here are just a few, but read them all and be thorough about your process:

In the next few years, you must make careful decisions about when you will and will not engage the system, use technology, or participate in society.

Freedom will not be compatible with the digital control grid; it will endure in ways that out think the constraints that have been placed on us, in whatever way it can.

8 thoughts on “How the Crackdown on Patriots Will Occur: Dissent Will Become Unthinkable”