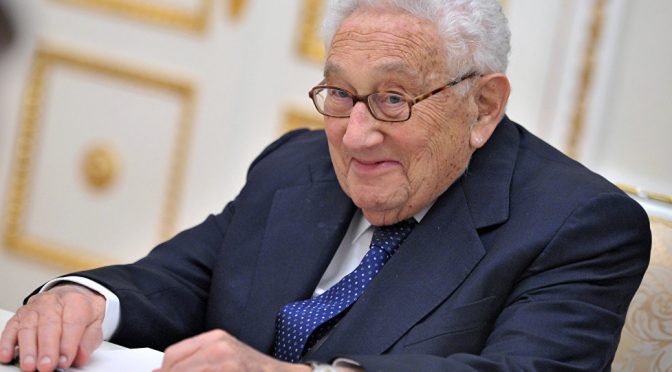 The English language Russian news agency, Sputnik, reports that former US Secretary of State Henry Kissinger is advising US president-elect Donald Trump how to “bring the United States and Russia closer together to offset China’s military buildup.”

https://sputniknews.com/politics/201612271049024500-kissinger-trump-russia/
by Dr. Paul Craig Roberts
If we take this report at face value, it tells us that Kissinger, an old cold warrior, is working to use Trump’s commitment to better relations with Russia in order to separate Russia from its strategic alliance with China.
China’s military buildup is a response to US provocations against China and US claims to the South China Sea as an area of US national interests. China does not intend to attack the US and certainly not Russia.
Kissinger, who was my colleague at the Center for Strategic and International studies for a dozen years, is aware of the pro-American elites inside Russia, and he is at work creating for them a “China threat” that they can use in their effort to lead Russia into the arms of the West. If this effort is successful, Russia’s sovereignty will be eroded exactly as has the sovereignty of every other country allied with the US.
At President Putin’s last press conference (here), journalist Marat Sagadatov asked if Russia wasn’t already subject to forms of foreign semi-domination:
“Our economy, industry, ministries and agencies often follow the rules laid down by international organizations and are managed by consulting companies. Even our defense enterprises have foreign consulting firms auditing them.” The journalist asked, “if it is not time to do some import substitution in this area too?”
Every Russian needs to understand that being part of the West means living by Washington’s rules. The only country in the Western Alliance that has an independent foreign and economic policy is the US.
All of us need to understand that although Trump has been elected president, the neoconservatives remain dominant in US foreign policy, and their commitment to the hegemony of the US as the uni-power remains as strong as ever.
The neoconservative ideology has been institutionalized in parts of the CIA, State Department and Pentagon. The neoconservatives retain their influence in media, think tanks, university faculties, foundations, and in the Council on Foreign Relations.
We also need to understand that Trump revels in the role of tough guy and will say things that can be misinterpreted as my friend, Finian Cunningham, whose columns I read, usually with appreciation, might have done (here).
I do not know that Trump will prevail over the vast neoconservative conspiracy. However, it seems clear enough that he is serious about reducing the tensions with Russia that have been building since President Clinton violated the George H. W. Bush administration’s promise that NATO would not expand one inch to the East.
Unless Trump were serious, there is no reason for him to announce Exxon CEO Rex Tillerson as his choice for Secretary of State. In 2013 Mr. Tillerson was awarded Russia’s Order of Friendship.
As Professor Michel Chossudovsky has pointed out, a global corporation such as Exxon has interests different from those of the US military/security complex.
The military/security complex needs a powerful threat, such as the former “Soviet threat” which has been transformed into the “Russian threat,” in order to justify its hold on an annual budget of approximately one trillion dollars.
In contrast, Exxon wants to be part of the Russian energy business. Therefore, as Secretary of State, Tillerson is motivated to achieve good relations between the US and Russia, whereas for the military/security complex good relations undermine the orchestrated fear on which the military/security budget rests.
Clearly, the military/security complex and the neoconservatives see Trump and Tillerson as threats, which is why the neoconservatives and the armaments tycoons so strongly opposed Trump and why CIA Director John Brennan made wild and unsupported accusations of Russian interference in the US presidential election.

The lines are drawn. The next test will be whether Trump can obtain Senate confirmation of his choice of Tillerson as Secretary of State.
The myth is widespread that President Reagan won the cold war by breaking the Soviet Union financially with an arms race. As one who was involved in Reagan’s effort to end the cold war, I find myself yet again correcting the record.
Reagan never spoke of winning the cold war. He spoke of ending it. Other officials in his government have said the same thing, and Pat Buchanan can verify it.
Reagan wanted to end the Cold War, not win it. He spoke of those “godawful” nuclear weapons. He thought the Soviet economy was in too much difficulty to compete in an arms race.
He thought that if he could first cure the stagflation that afflicted the US economy, he could force the Soviets to the negotiating table by going through the motion of launching an arms race. “Star wars” was mainly hype. (Whether or nor the Soviets believed the arms race threat, the American leftwing clearly did and has never got over it.)
Reagan had no intention of dominating the Soviet Union or collapsing it. Unlike Clinton, George W. Bush, and Obama, he was not controlled by neoconservatives. Reagan fired and prosecuted the neoconservatives in his administration when they operated behind his back and broke the law.
The Soviet Union did not collapse because of Reagan’s determination to end the Cold War. The Soviet collapse was the work of hardline communists, who believed that Gorbachev was loosening the Communist Party’s hold so quickly that Gorbachev was a threat to the existence of the Soviet Union and placed him under house arrest.
It was the hardline communist coup against Gorbachev that led to the rise of Yeltsin. No one expected the collapse of the Soviet Union.
The US military/security complex did not want Reagan to end the Cold War, as the Cold War was the foundation of profit and power for the complex. The CIA told Reagan that if he renewed the arms race, the Soviets would win, because the Soviets controlled investment and could allocate a larger share of the economy to the military than Reagan could.
Reagan did not believe the CIA’s claim that the Soviet Union could prevail in an arms race. He formed a secret committee and gave the committee the power to investigate the CIA’s claim that the US would lose an arms race with the Soviet Union. The committee concluded that the CIA was protecting its prerogatives. I know this because I was a member of the committee.
American capitalism and the social safety net would function much better without the drain on the budget of the military/security complex. It is more correct to say that the military/security complex wants a major threat, not an actual arms race.
Stateless Muslim terrorists are not a sufficient threat for such a massive US military, and the trouble with an actual arms race as opposed to a threat is that the US armaments corporations would have to produce weapons that work instead of cost overruns that boost profits.
The latest US missile ship has twice broken down and had to be towed into port. The F-35 has cost endless money, has a variety of problems (here) and is already outclassed. The Russian missiles are hypersonic. The Russian tanks are superior.
The explosive power of the Russian Satan II ICBM is terrifying. The morale of the Russian forces is high. They have not been exhausted from 15 years of fighting without much success pointless wars against women and children.
Washington, given the corrupt nature of the US military/security complex, can arms race all it wants without being a danger to Russia or China, much less to the strategic alliance between the two powers.
The neoconservatives are discredited, but they are still a powerful influence on US foreign policy. Until Trump relegates them to the ideological backwaters, Russia and China had best hold on to their strategic alliance. Anyone attempting to break this alliance is a threat to both Russia and China, and to America and to life on earth.
Dr. Paul Craig Roberts was Assistant Secretary of the Treasury for Economic Policy and associate editor of the Wall Street Journal. He was columnist for Business Week, Scripps Howard News Service, and Creators Syndicate. He has had many university appointments. His internet columns have attracted a worldwide following.
http://www.4thmedia.org/2016/12/what-is-henry-kissinger-up-to/

19 thoughts on “What is Mr. Kissinger up to in Russia?”