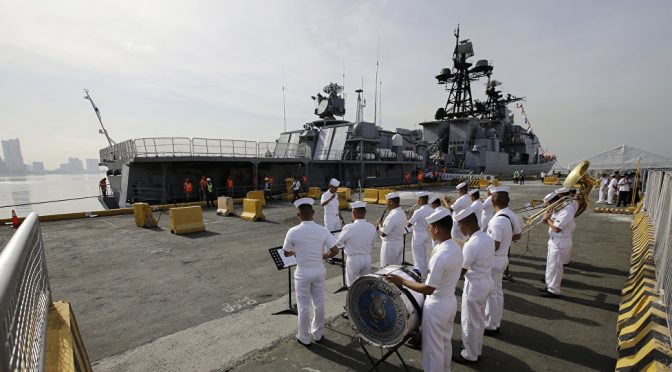 On Thursday Philippines President Rodrigo Duterte said he is open to the idea of conducting joint military exercises with Russia, following a goodwill visit to Manila by Russian navy ships.
“The goodwill visit by the Russian Navy will contribute to the strengthening of friendship with the Philippine navy, it also is an indication of our maritime cooperation which can further be enhanced by naval diplomacy and camaraderie,” presidential spokesman Ernesto Abella said.
On Tuesday Russia’s Admiral Tributs anti-submarine destroyer and Boris Butoma sea tanker arrived in the Philippines for a four-day visit during which they
Rear Admiral Eduard Mikhailov, deputy commander of Russia’s Pacific Fleet, told a press conference in Manila that the Russian and Philippine governments are preparing to discuss joint naval drills, which would help to fend off the threats of terrorism and piracy.
“Our governments will soon discuss the possibility of holding joint naval drills. Terrorism and piracy remain some of the most serious problems facing the world today, and our exercises could help to demonstrate our readiness to deal with these problems,” Mikhailov said.
Mikhailov also mentioned the possibility of Russia and the Philippines co-operating on naval drills in the South China Sea, along with other countries in the region.
“We really hope that in a few years, the military exercises for example in your region, in the South China Sea, will (involve) for example, not only Russia-Philippines, but Russia, Philippines, China and maybe Malaysia together,” Mikhailov said.
The visit is the third to the Philippines by the Russian navy, and was preceded by a trip to Moscow by Philippines foreign and defense ministers to explore the possibility of boosting military ties.
On Wednesday the Russian ambassador to the Philippines Igor Khovaev told a news conference that Russia is ready to co-operate with the Philippines wish to diversify its foreign partners, and willing to supply sophisticated military equipment.
“It’s not a choice between these partners and those ones. Diversification means preserving and keeping old traditional partners and getting new ones. So Russia is ready to become a new reliable partner and close friend of the Philippines,” he said.
“We are ready to supply small arms and light weapons, some aeroplanes, helicopters, submarines and many, many other weapons. Sophisticated weapons. Not second-hand ones,” Mr Khovaev said.
“Russia has a lot to offer but everything will be done in full compliance with international law.”
That Russian-Philippines relations are relatively undeveloped allows quite a lot of scope to improve them, Asian affairs analyst Prashanth Parameswaran observed in the Diplomat on Wednesday.
“The visit of the warships is yet another sign of the potential for burgeoning Philippines-Russia defense cooperation, even though it is still early days. The engagements during the visit itself are fairly standard: according to the Philippine Navy, they include tours to historical sites, ceremonies, capability demonstrations, shipboard tours, games between troops, and interactions with civilians,” Parameswaran wrote.
Official comments and developing bilateral relationship “indicate the importance of paying attention to a defense relationship where most developments would have hardly been fathomable even a year ago,” he added.
As well as pursuing better relations with Russia and China, Philippines President Rodrigo Duterte has repeatedly criticized the US since taking office in June. The US and the Philippines have maintained a close defense relationship since they signed a mutual defense treaty in 1951.
Last week it was reported that Duterte has asked his defense chief to move the location of a joint naval drill with the US away from the disputed South China Sea.
“We might move the naval exercises facing the South China Sea to Mindanao area to avoid annoying our neighbor [China], so let us be sensitive of our neighbors,” Defense Secretary Delfin Lorenzana told reporters during a military ceremony on Friday.
The colder relationship with Washington comes despite outgoing President Barack Obama’s attempted “pivot to Asia,” which had been supposed to strengthen alliances in Asia and maintain a sphere of influence there in the face of an increasingly powerful China.
In October President Duterte headed a trade delegation to Beijing which signed $13.5 billion in deals with Chinese companies, and announced his “separation from the United States.”
“Both in military, not maybe social, but economics also. America has lost,” Duterte told a forum of delegates at the Great Hall of the People in Beijing.
“I’ve realigned myself in your ideological flow and maybe I will also go to Russia to talk to (President Vladimir) Putin and tell him that there are three of us against the world — China, Philippines and Russia. It’s the only way,” the President said.
Parameswaran noted that one of Manila’s frustration with its US ally is Washington’s inability to make a positive contribution to the South China Sea dispute.
The US encouraged Manila to take its case against China to the Permanent Court of Arbitration at The Hague. Manila won the case but Beijing rejected the verdict and has continued to claim sovereignty over most of the South China Sea, a highly-contested region through which $5 trillion in global shipping trade passes annually.
“He (Duterte) cited the example of United States’ inability to stop China from building its artificial islands, that undermined the Philippines’ position in the South China Sea. In Duterte’s view, the incident laid bare Washington’s ineffectiveness,” Parameswaran wrote.
“America did nothing. And now that it is completed, they want to patrol the area. For what? Is America going to finish the world?” Duterte asked rhetorically during an interview with Rappler in 2015.
https://sputniknews.com/asia/201701051049290873-philippines-russia-us-foreign-policy/
https://www.youtube.com/watch?v=nCPh2tfAMY4