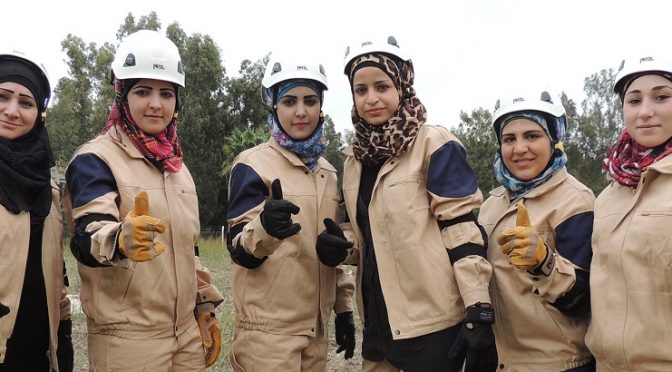 The blockade of water from Wadi Barada to 5 million people in Damascus is taking an interesting turn. The U.S. and UK financed White Helmet organization seems to be directly involved in it. This increases the suspicion that the illegal blockade of water to civilians in Damascus is part of a organized campaign under U.S. command. The campaign is designed to block utilities to government held areas as revenge for the liberation of east Aleppo.

As we described it yesterday:
After the eastern part of the city of Aleppo was liberated by Syrian government forces, the local rebels and inhabitants in the Barada river valley were willing to reconcile with the Syrian government. But the al-Qaeda Takfiris disagreed and took over. The area is since under full al-Qaeda control and thereby outside of the recent ceasefire agreement.On December 22 the water supply to Damascus was suddenly contaminated with diesel fuel and no longer consumable. A day later Syrian government forces started an operation to regain the area and to reconstitute the water supplies.
Photos and a video on social media (since inaccessible but I saw them when they appeared) showed the water treatment facility rigged with explosives. On Dec 27th the facility was blown up and partly destroyed.
The Syrian government is ready to send repair teams to rehabilitate the water flow to the millions of civilians in Damascus. But access to the site is denied and the Syrian army is now trying to push al-Qaeda and its allies away from it.
Curiously some “civil” groups today offered access under several (not agreeable) conditions:

Offer by opposition to trade access to water source for #Damascus with halting of military operations by army pic.twitter.com/JQKyYUftQd

Note who signed it: The organizations who make an offer to lift the water blockade of Damascus obviously think they have the power to do so. They must then be also held responsible for keeping the blockade up. They must also have intimate relations with the al-Qaeda fighters who currently occupy the damaged water facilities.
The U.S. and UK government which created and paid White Helmets are “impartially”, “neutrally” and “for all Syrians” blocking the water supply to 5 million Syrians in Damascus. U.S. military and CIA officers run the “operations rooms” in Jordan and Turkey that direct the insurgency.
This increases suspicion that the blockade is part of an organized response by the enemies of Syria to the recent liberation of east-Aleppo. As noted yesterday:

This shut down is part of a wider, seemingly coordinated strategy to deprive all government held areas of utility supplies. Two days ago the Islamic State shut down a major water intake for Aleppo from the Euphrates. High voltage electricity masts of lines feeding Damascus have been destroyed and repair teams, unlike before, denied access. Gas supplies to parts of Damascus are also cut.

Even after 14 days of water crisis in Damascus the “western” media are not reporting about the al-Qaeda blockade of water for 5 million Syrians. We can be sure that not a word will be written by them about this illegal hostages taking of millions of civilians in Damascus by their favorite propaganda organization White Helmets.
The original source of this article is Moon of Alabama

ALEPPO, Syria — A growing number of media reports praise the White Helmets, a group of first responders who save lives in Syria. But a recent report from an independent journalist claims the Helmets are more concerned with destabilizing the Syrian government on behalf of the group’s international backers than truly making a difference in Syrian life expectancy.
In March, CBS News praised the volunteer group: “When the bombs rain down on Syria, it is the White Helmets who run in to help. These brave volunteers claw and saw their way through the rubble to save those buried beneath.”
One White Helmet was quoted as saying that “everyone loves us in Syria” because the organization is nonpartisan and “works with all the groups.”
Similarly, in May, CNN claimed the group formed in response to the devastating use of barrel bombs by the government under Syrian President Bashar Assad, and was made up of “ordinary men who started to respond to the explosions, fires and attacks. Barbers, bakers, students and electricians, to name a few.”
Their simple common headgear, CNN reported, was simply a matter of thriftiness on the part of the suffering Syrian people: “Most had bought helmets that were white, instead of colored, simply because they were cheaper.” The White Helmets carry the bodies of children in the al-Mowasalat neighborhood of the northern Syrian city of Aleppo on April 27, 2014. Photo: White Helmets.

But, according to Vanessa Beeley, a peace activist and reporter focusing on the Middle East for 21st Century Wire, the White Helmets are actually an invention of foreign interest groups hoping to destabilize the Syrian government by creating propaganda that supports military intervention by the U.S. and its allies.
According to her report, published on Wednesday, the group focuses its efforts only on areas held by al-Qaida and Jabhat al-Nusra, Syria’s al-Qaida affiliate also known as the Nusra Front. They ignore atrocities carried out by these groups, which are propped up by Western aid and weapons, while creating media-friendly images of victims of Assad’s bombing of rebel-held areas.
Beeley quotes journalist Rick Sterling, who called the group “highly effective manipulators”: