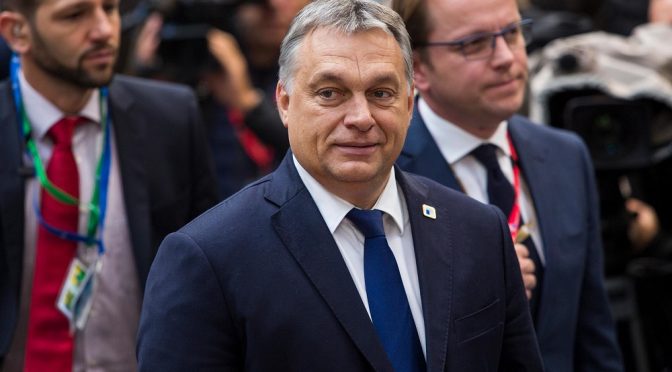 Except for the ignoramus, everybody else wants to get rid of anything that has to do with George Soros.
Hungary under Prime Minister Viktor Orban is no exception.

Hungary Plans to Crackdown on All Soros-Funded NGOs

by Zoltan Simon
January 11, 2017, 12:44 AM GMT+8
Hungary plans to crack down on non-governmental organizations linked to billionaire George Soros now that Donald Trump will occupy the White House, according to the deputy head of Prime Minister Viktor Orban’s party.
The European Union member will use “all the tools at its disposal” to “sweep out” NGOs funded by the Hungarian-born financier, which “serve global capitalists and back political correctness over national governments,” Szilard Nemeth, a vice president of the ruling Fidesz party, told reporters on Tuesday. No one answered the phone at the Open Society Institute in Budapest when Bloomberg News called outside business hours.
“I feel that there is an opportunity for this, internationally,” because of Trump’s election, state news service MTI reported Nemeth as saying. Lawmakers will start debating a bill to let authorities audit NGO executives, according to parliament’s legislative agenda.
Orban, the first European leader to publicly back Trump’s campaign, has ignored criticism from the European Commission and U.S. President Barack Obama’s administration for building a self-described “illiberal state” modeled on authoritarian regimes including Russia, China and Turkey. In 2014, Orban personally ordered the state audit agency to probe foundations financed by Norway and said that civil society groups financed from abroad were covers for “paid political activists.”
In a pre-election commercial, he showed images of Soros along with Federal Reserve Chair Janet Yellen, and Goldman Sachs Group Inc. CEO Lloyd Blankfein, all of whom are Jewish. The Anti-Defamation League criticized the ad for touching on “subjects that anti-Semites have used for ages.”

George responded stubbornly to the plans…

Soros Group to Stay in Hungary Despite Trump-Inspired Crackdown

The foundation funded by billionaire George Soros will continue to work in Hungary despite a pledge by the ruling party of Prime Minister Viktor Orban, a past recipient of a scholarship from the philanthropist, to crack down on the group after Donald Trump takes office.
The Open Society Foundations responded to a pledge on Tuesday by Orban’s ruling Fidesz party to “sweep out” the non-governmental organizations funded by the Hungarian-born financier. The group, which finances over 60 Hungarian NGOs, has spent more than $1.6 billion on democratic development in eastern Europe and the former Soviet Union.
“The Open Society Foundations will continue to work in Hungary despite government opposition to our mission of fairer, accountable societies,”’ the organization’s president, Christopher Stone, said in an e-mail to Bloomberg on Wednesday. “In Hungary and around the world we are more focused than ever on working with local groups to strengthen democratic practice, rights, and justice.”
Orban, the first European leader to publicly back Trump’s campaign, has ignored criticism from the European Commission and U.S. President Barack Obama’s administration for building a self-described “illiberal state” modeled on authoritarian regimes including Russia, China and Turkey. In 2014, Orban said civil society groups financed from abroad were covers for “paid political activists,” and lawmakers will start debating a bill this year to let authorities audit NGO executives, according to parliament’s legislative agenda.
On Tuesday, Fidesz Vice President Szilard Nemeth denounced the NGO, saying it seeks to put “political correctness over national government” interests. Trump’s election provides “an opportunity internationally” to crack down, he said.

Orban does not agree to the absorption of Middle Eastern refugees into his country. He doesn’t believe it’s the right solution. The right solution, of course, is to get rid of George Soros.
Orban is a product of Soros scholarship, aka brainwashing.

The OSF started work in Hungary in 1984, before the fall of the Iron Curtain, where it supported anti-communist groups including one led by Orban, which later became Fidesz. In 1989, Orban, a liberal anti-communist student leader, received a Soros scholarship to study at Oxford University to familiarize himself with multi-party democracy.
After first becoming prime minister in 1998 and returning to power in 2010, Orban isn’t alone in targeting Soros-backed initiatives. Russian President Vladimir Putin’s administration banned the charity in 2015, adding it to a list of “undesirable” foreign institutions, saying that it threatened the country’s security and constitution. Authorities in the former Soviet Republic of Uzbekistan shut down the group’s local office in 2004.
https://www.bloomberg.com/