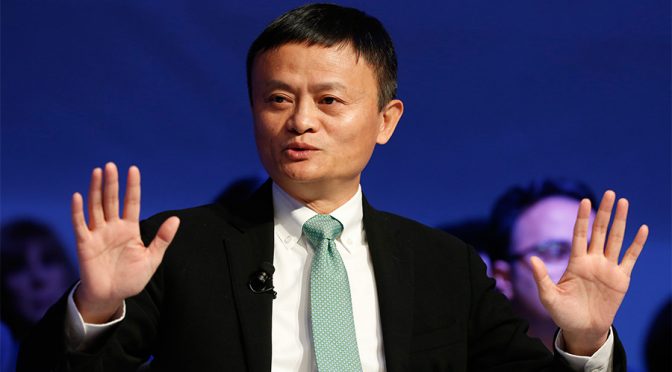 Chinese billionaire and Alibaba founder Jack Ma believes that improper distribution of funds and hyper inflated US military spending, not globalization or other countries “stealing” US jobs, is behind the economic decline in America.
The Chinese business magnate earlier in January met with US President-elect Donald Trump, who has bemoaned the loss of American industry and jobs due to the outsourcing of labor to countries like Mexico and China. Ma, however, has a different view of what is behind the US economic decline.

“Over the past, the Americans had thirteen wars spending 40.2 trillion dollars,” said Ma, speaking at the World Economic Forum in Davos. “What if they spent a part of that money on building up the infrastructure, helping the white-collar and the blue-collar workers? No matter how strategically good it is, you’re supposed to spend money on your own people.”
“And the other money which I’m curious about is that when I was young, all I heard about America was Ford and Boeing and those big manufacturing companies. The last 10-20 years, all I heard about is Silicon Valley and Wall Street,” he continued.
“And what happened? The year 2008: the financial crisis wiped out 19.2 trillion dollars in the USA alone and destroyed 34 million jobs globally. So what if the spent on Wall Street and the Middle East was spent on the Mid-West of the United States, developing the industry there? That could change a lot.”
According to the Stockholm International Peace Research Institute , the United States spent $596 billion, or 3.3 percent of its GDP, on military expenditure in 2015, which is higher than any other country in the world. In Ma’s opinion, this is partly responsible for the loss of jobs in America’s Rust Belt.
“So it’s not that other countries steal jobs from you guys, it is your strategy! You do not distribute the money in a proper way,” he summarized.
Ma also expressed the view that overall globalization was a positive thing as it had brought many benefits to both China and the world. However, it should be improved by making more room for small businesses rather than the current system run by the World Trade Organization (WTO), which was developed to protect corporate interests.
“The WTO was great but it was mainly designed for developed countries and big companies. There’s no opportunity for small business. We want to build up an EWTP – an Electronic World Trade Platform – to support young people, small business.”

Ma founded Alibaba, one of the world’s largest online retailers and e-commerce platforms, back in 1999. According to Forbes, Ma has a net worth of approximately 27.7 billion dollars, making him the second-richest man in China.

Well, the guy is absolutely right. America spends more than the next 7 biggest military spender-countries combined.
No wonder Alibaba’s, and China’s economic rise in general, is phenomenal. The Chinese are using their Common Sense.
Here’s the picture of America’s main focus for the last seven decades.

It must also be considered that it’s not the Chinese who designed the prevalent, corrosive economic system. It’s the West.
Now that the Chinese are getting so proficient about the whole “dog eat dog” capitalist system, the Western governments are sourgraping about Chinese currency manipulation, product design piracy and outright economic sabotage. Yet, the system itself encourages corruption, e.g. Libor interest rigging, unregulated international derivatives trading, stock market speculations, and NSA corporate surveillance against competition and allies alike.
In contrast, the ancient Silk Road was about the exchange of physical goods with real currencies, and that’s the reason why China has accumulated so much historical gold reserves, which they lent to the West and constitute the bulk of the Global Collateral Accounts of Asia, the same historical assets that the West still needs to return in full, and which was never used to improve the planet with their science and technology, as agreed upon by both sides.
This technically makes the whole China piracy claims as nothing more than a justified recovery of what has been paid for, a long time ago.

In short, China is doing it again for the West with their standing offer to help Trump’s government, the Middle East and Europe through the New Silk Road economic program, all for the sake of global peace and harmony.
The soon to be inaugurated President Donald Trump should therefore stop blaming the Chinese for lost American jobs, and instead focus more on harnessing American creativity rather than continue feeding on the insatiable appetite of the military industrial complex and its penchant for destruction.
The US government needs to learn the lessons of the not too distant past, because in the end, all the Chinese want is to make the next generation play and be happy — way much better than training them for wars that they don’t fully understand.

“Our vision, our strategy in the next ten, twenty years later should focus on happiness and health.
We believe that we should make young people join sports and make the world happier.” – Jack Ma at the WEF 2017

How can the same Sheeples he intends to kill afford to render a thunderous applause, is really beyond comprehension.

5 thoughts on “Nobody’s Stealing Your Jobs, You Spend Too Much on Wars | Alibaba’s Jack Ma”