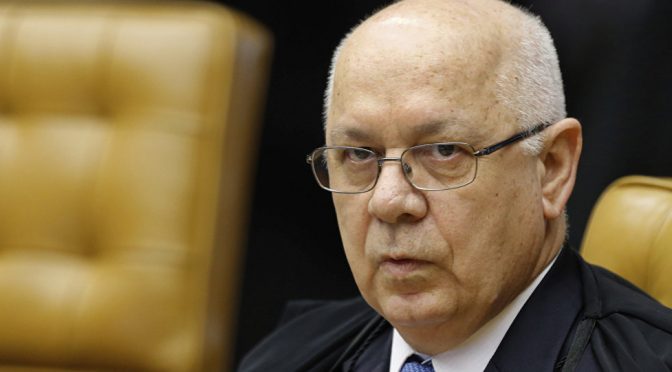 A small plane has crashed near Rio de Janeiro, carrying a Supreme Federal Court judge who was investigating the ongoing high-profile Operation Carwash corruption scandal in Brazil, sparking worries that nefarious intent may have contributed to the aircraft’s wreckage.
The judge, a central figure in Operation Carwash, is among the victims, the local fire brigade has confirmed.

Besides being a tragedy, this plane crash could have far reaching consequences for Brazil https://t.co/75d6j8hr18

While the plane has the capacity to seat eight, a magistrate by the name of Teori Zavascki was aboard along with three other passengers. Zavascki’s son, Francisco, confirmed his father’s status on the aircraft. “Please pray for a miracle,” he said in a Facebook post.

There are currently some four-dozen troops conducting a search mission. The soldiers are being aided by three Brazilian Navy seacraft, the Rio Fire Department, and local fishing boats. Local media outlets report that the plane landed in the sea of Paraty, adding that three casualties have been confirmed.
The plane, a Beechcraft King Air C90, was less than two miles from the landing strip in Rio, Brazil’s capital. The Brazilian Air Force corroborated reports that four passengers were on the flight, but did not disclose further details about their specific identities. Brazilian aviation agencies noted that the aircraft was fully registered and had been documented to be in working order. No root causes have been offered.
A hostel owner in the region said, “I have not seen the moment of the accident, I just felt a strong smell of fuel.” One of her employees is part of the search and rescue team. Brazilian news outlet G1 has called the event an accident.

A report by independent auditors on behalf of Brazil’s Senate indicates that the impeachment effort against democratically elected Brazilian President Dilma Rousseff is without basis nearly two months after the official was suspended from office for 180 days pending a final vote by legislators.
The justification for the impeachment effort against the Brazilian leader was that she used a budget trick known as pedaladas, or the illegal delay of repayments to state banks, to mask public debt in the lead up to her 2014 presidential election bid. However, the Senate’s expert report concluded that there was “no indication of direct or indirect action by Dilma” to engage in such budgetary malfeasance.
The Associated Press explained that “Independent auditors hired by Brazil’s Senate said in a report released Monday that suspended President Dilma Rousseff didn’t engage in the creative accounting she was charged with at her impeachment trial.”
On Tuesday, the top columnist for Brazil’s Folha de Sao Paulo paper, Elio Gaspari, blasted Michel Temer and his Brazilian Democratic Movement (PMDB) allies for staging a legalized mutiny under the title “There is a Coup” while even western media outlets favorable to the agenda of austerity and natural resource pillaging of the interim president are beginning to wonder whether the impeachment was more or less theatrical window dressing for an undemocratic overthrow.
The Early Case for the Allegations of a Coup
Notwithstanding the Brazilian Senate’s expert report vindicating Dilma Rousseff for the primary charge of the impeachment, the process has come under fire for procedural irregularities, rank corruption, and political motivation from the beginning.
The initial vote by the Brazilian lower house was led by Eduardo Cunha, a notoriously corrupt politician exposed in the Panama Papers for using offshore accounts to mask massive kickbacks from the country’s industrial sector and who is believed to have dozens of Swiss Bank accounts for the same purpose.
Indications inside of Brazil are that Cunha bribed his fellow legislators to secure a vote in favor of referring the impeachment proceedings to the Brazilian Senate into the caring arms of PMDB Party ally Renan Calheiros.
This bid was nearly trounced at the last hour when, only days before the Brazilian Senate was set to vote on whether to suspend Dilma Rousseff for 180 days, the Brazilian Supreme Court ousted Eduardo Cunha from his post as leader of the lower house citing pending corruption charges.
Cunha’s replacement, Eduardo Maranhao, moved immediately to annul the lower house impeachment vote which he argued was devastated by procedural irregularities that rendered the vote invalid. Brazilian Senate leader Renan Calheiros pushed back saying the chamber would vote on whether to suspend Dilma Rousseff two days later questioning Maranhao’s jurisdiction to annul an earlier vote.
Maranhao quickly rescinded his call to annul the prior vote for fear of tipping the country into a constitutional crisis and the vote proceeded following a lengthy and absurd debate with 55 senators voting for suspending Dilma Rousseff and 22 voting against sending Brazilians into an uproar.
Leaked Tapes Prove Nefarious Plot to Replace Dilma with Temer
In his first 30 days in office, Michel Temer lost three of his chosen minister to corruption charges including his close ally and President of the Brazilian Democratic Movement Party (PMDB) Romero Juca.
The PMDB leader removed himself from office after Brazil’s largest newspaper Folha de Sao Paulo released a taped conversation between him and construction executive Sergio Machado plotting the impeachment of Dilma Rousseff and installation of Michel Temer in her place as a way to shut down a massive corruption dragnet, the Car Wash Investigation.
One week later, another tape released by Brazil’s O Globo television forced the departure of Temer’s Transparency Minister Fabiano Silveira who was tasked with leading the country’s anti-corruption efforts. The tape featured a conversation Silveira held with Senate President Renan Calheiros and construction executive Sergio Machado wherein the Transparency minister advised the senate leader on how to avoid being charged in the Car Wash corruption probe.
Today the world’s fifth most populous country finds itself hostage to the most corrupt political force in the Western hemisphere, the Brazilian Democratic Movement (PMDB) of Temer, Cunha, Calheiros, Juca, and Silveira all in the name of anti-corruption and all against the will of Brazil’s democratic choice.

In two weeks, the highly-orchestrated rightwing impeachment of Dilma Rousseff, viewed by many Brazilians as a coup, has been beleaguered by a combination of incompetence by the Temer government and a series of leaked audio files implicating key cabinet ministers in their plotting of the “impeachment” as a means to derail a far-reaching corruption probe.
The façade of Michel Temer’s legitimacy unraveled just days into his administration, when Brazilian newspaper Folha de Sao Paulo released an audio recording and transcript of a conversation between the country’s Planning Minister, Romero Juca, and oil executive Sergio Machado, discussing how to put Temer into office to “stop the bleeding” from the so-called Car Wash Investigation into petroleum giant Petrobras.
At the time, Juca also served as the president of the Brazilian Democratic Movement, the same political party of the chief participants in the impeachment, Temer, Senate leader Renan Calheiros, and disgraced former lower-house leader Eduardo Cunha. Juca stepped down from office immediately following the release of the news story.
On Monday, it was Fabiano Silveira who became the second official to resign his post in the Temer Administration, after a second leaked recording exposed Brazil’s Transparency Minister, who is tasked with combating corruption, offering advice to Calheiros on how to undermine the Car Wash corruption probe, in which he, along with most of the country’s high-ranking government officials, is implicated.
In the two weeks that Temer’s transition government has held power, it has moved to unravel the country’s social welfare state, eliminating the minister of culture, and has moved to replace regional commitments and the BRICS alliance with renewed deregulated system of trade with the United States. Temer, to many Brazilians is systematically reversing 13 years of policies advanced by the Workers Party.
With the once vibrant South American economic powerhouse reeling under a neoliberal agenda, Loud & Clear’s Brian Becker sat down on Wednesday with Aline C. Piva and Juliana Moraes, of the group Brazilian Expats for Democracy, to discuss what might happen next.
“Brazilians have taken to the streets,” said Piva. “When Michel Temer first assumed control of the government he started a rollback of the social policies that have been in effect for a decade and a half in Brazil. He cut back social programs and he extinguished the minister of culture. In less than one week he rolled back 13 years of social achievement.”
The current administration is evidently corrupt, but what about Dilma Rousseff?
“There are no investigations under Dilma Rousseff’s name for corruption, and there is nothing that would show that she is a corrupt politician,” explained Moraes. “What we are seeing is that the people who are looking to oust her actually have dirty records. The current interim president is supposed to be somebody who is unelectable. He has dirty records, which mean corruption charges against him, so for the next eight years he is not supposed to even be in office.”
She also explained that the recent release of audio files exposing Romero Juca’s coup plot and Fabiano Silveira’s plans to undermine the corruption probe have led to cries for Temer to go, with many protesters labeling him “Golpista” for “coup leader.”
Was this coup orchestrated to force US-backed neoliberal economics on Brazil?
“Absolutely,” said Piva. “The first day of Temer’s administration made clear that the neoliberal agenda is back in place in Brazilian politics.”
The activist explained that Temer’s administration has moved to revoke or offset existing commitments in Latin America, the developing world, and with Russia and China in favor of a push toward US-centric bilateral trade deregulation.
“Jose Serra, the new minister of foreign affairs, in his first speech, made very clear that Brazil is going to roll back the policies that led to more independence in the region,” said Piva.
Moraes took a stronger line, comparing the present situation to the US-backed 1964 Brazilian military coup, noting similar involvement in the proceedings by the US ambassador. “Now we have Liliana Ayalde, the current ambassador to Brazil and the former ambassador to Paraguay in 2008 to 2011, when there was a coup there, who is writing op-ed in the right-wing newspaper O Globo about how Brazil is an essential market for American corporations, a must-play for US business.”
She said that America aims to undermine the multilateral associations established by Brazil’s Workers Party with South American countries, and also looks to fracture the BRICS economic alliance for challenging the domination of the World Bank and the IMF. “Yes, there is some involvement by the US,” stated Ayalde.