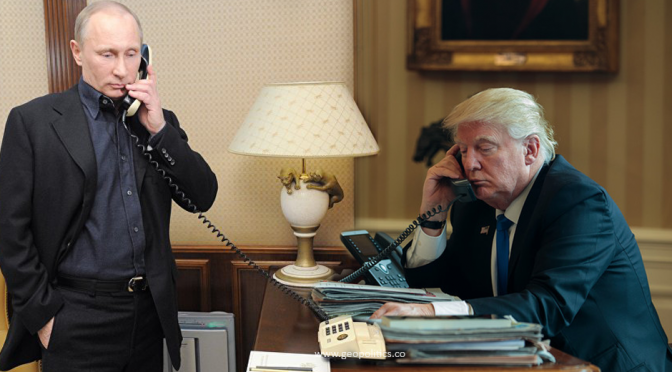 Vladimir Putin congratulated Donald Trump on taking office and wished him every success in his work.


by Team of the Official Website of the President of Russia
During the conversation, both sides expressed their readiness to make active joint efforts to stabilise and develop Russia-US cooperation on a constructive, equitable and mutually beneficial basis.
Mr Putin and Mr Trump had a detailed discussion of pressing international issues, including the fight against terrorism, the situation in the Middle East, the Arab-Israeli conflict, strategic stability and non-proliferation, the situation with Iran’s nuclear programme, and the Korean Peninsula issue. The discussion also touched upon the main aspects of the Ukrainian crisis. The sides agreed to build up partner cooperation in these and other areas.
The two leaders emphasised that joining efforts in fighting the main threat – international terrorism – is a top priority. The presidents spoke out for establishing real coordination of actions between Russia and the USA aimed at defeating ISIS and other terrorists groups in Syria.
The sides stressed the importance of rebuilding mutually beneficial trade and economic ties between the two counties’ business communities, which could give an additional impetus to progressive and sustainable development of bilateral relations.
Mr Putin and Mr Trump agreed to issue instructions to work out the possible date and venue for their meeting.
Donald Trump asked to convey his wishes of happiness and prosperity to the Russian people, saying that the American people have warm feelings towards Russia and its citizens.
Vladimir Putin, in turn, emphasised that the feeling is mutual, adding that for over two centuries Russia has supported the United States, was its ally during the two world wars, and now sees the United States as a major partner in fighting international terrorism.
The two leaders agreed to maintain regular personal contacts.
The conversation took place in a positive and constructive atmosphere.

For the BRICS Alliance, the phrase “international terror” is just a euphemism for Khazarian terror, and for the two governments to be on the same boat as to the latter’s fate, i.e. “joining efforts in fighting the main threat – international terrorism – is a top priority,” we can expect the reduction, or total elimination, of regime change attempts in the next 4 years, at least.
Already, the business community are very optimistic about the outcome of their first engagement.

Recall that as recently as last year, hundreds of global industrialists attended the business conference in St. Petersburg, where they expressed their collective desire to end all wars of destruction in favor of a more peaceful and abundant future for all.

We just need to stop being apathetic to everything that’s going on. That’s the least we can do.

3 thoughts on “Putin's Telephone Conversation with US President Donald Trump”