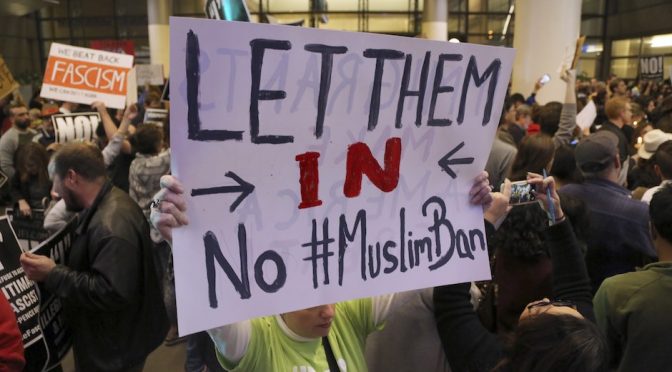 Trump is banning all Muslims from entering into the United States — that’s the single line that’s been repeated all over the airwaves, and yet the details are not about banning all Muslims from entering the fabled Land of Milk and Honey.
What we are seeing here are some problems which can be expected when some radical changes are being implemented, e.g. immigration personnel may wrongfully think that this is indeed a total ban on Muslims, such that the Trump government needs to clarify later on.
But the intention is pretty clear: Trump wants to fulfill his campaign promises, i.e. executive tasks, in the soonest possible time, in much the same way as any corporate organization should.

Objectively, it’s too early to render judgement on what the Trump government is trying to do for America and the world. Yet, scores of organizations seem to be acting in unison in condemning his initial executive orders which sought to protect the integrity of the country and of its people.
It’s very clear that it’s only the usual noisy mainstream media, in cooperation with a few Open Society Foundations that are making a mountain out of a small hill. The rest is comfortable with it.
Here’s why:

It is our understanding that once the United States military will step in aggressively against ISIS, Al Nusra, etc. in Syria, Libya and Iraq, those terrorists will try to enter the United States, just like they entered the EU posing as refugees.
But, why can’t the protestors see it that way?
Normally, the voters would usually give the newly elected leaders a grace period by which they can prove themselves worthy of their positions, but this one is a huge anomaly, and the only explanation is that some groups are in panic of losing their power over the masses.

They are all in panic because they are already in the advancing age and they are losing their Empire which took them years to build. But it’s not about Donald Trump – that’s where they got it all wrong.
It’s the people waking up to the whole social engineering schemes that they have devised all these years, which resulted in the ascension of a Donald Trump to the White House. Except for the TV audiences in the US, no well-informed adult is buying it anymore.

We can see a parallel between Trump’s immigration suspension, and the impending extreme vetting to Duterte’s drug war, where the latter has been accused of overstepping his authority.
One thing is clear in both cases, effecting radical changes in the real world is not always a smooth ride, since there is more than one interest at play.

…Senators should focus their energies on ISIS, illegal immigration and border security instead of always looking to start World War III.

With some level of rationality, we can see that it’s not Trump being racist yet.

So, let’s just keep our vigilance and find out where this is all going.

3 thoughts on “Trump’s Extreme Vetting Sold as “Muslim Ban” by MSM; Not All Muslims are Buying it”