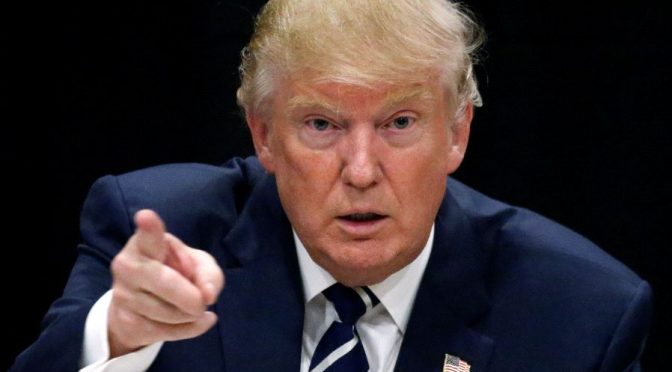 A recent statement from the White House has shocked the Israeli hierarchy when it said not to continue building new settlements, or any unilateral actions from both sides that would undermine the two-state solution that the United States has been advocating for the last 50 years.

By Michael Wilner
02 February 2017 23:45
White House official tells ‘Post’ all parties should cease ‘unilateral actions,’ affirms two-state solution.
WASHINGTON – The White House warned Israel on Thursday – in a surprising statement – to cease settlement announcements that are “unilateral” and “undermining” of President Donald Trump’s effort to forge Middle East peace, a senior administration official told The Jerusalem Post.
For the first time, the administration confirmed that Trump is committed to a comprehensive two-state solution to the Israeli- Palestinian conflict negotiated between the parties.
The official told the Post that the White House was not consulted on Israel’s unprecedented announcement of 5,500 new settlement housing units over the course of his first two weeks in office.
“As President Trump has made clear, he is very interested in reaching a deal that would end the Israeli-Palestinian conflict and is currently exploring the best means of making progress toward that goal,” the official said.
“With that in mind, we urge all parties to refrain from taking unilateral actions that could undermine our ability to make progress, including settlement announcements,” the official added. “The administration needs to have the chance to fully consult with all parties on the way forward.”
Trump plans to bring up the peace process in his meeting with Prime Minister Benjamin Netanyahu at the White House scheduled for February 15.
Trump looks forward to those discussions, White House Press Secretary Sean Spicer said in response to this report.
“The American desire for peace between the Israelis and the Palestinians has remained unchanged for 50 years,” Spicer said. “While we don’t believe the existence of settlements is an impediment to peace, the construction of new settlements or the expansion of existing settlements beyond their current borders may not be helpful in achieving that goal.”
On Thursday, Netanyahu reiterated his support for the settlement enterprise and said, during a visit to Ariel, that in the last week alone he had announced the advancement and authorization of 900 homes in that city.
Until now, Israeli officials have not known what to make of Trump administration policy on the issue of settlements specifically and, more generally, on the challenge of Middle East peace: Under Trump’s leadership, reference to a two-state solution was removed from the Republican Party platform over the summer, and the president’s envoy to Israel has publicly supported the settlement enterprise.
Trump has, however, repeatedly called peace between Israel and the Palestinians the “ultimate deal” – one that he has tasked Jared Kushner, a top adviser and his son-in-law, with moderating.
“I think it’s designed to chill some of the exuberance of those on the Israeli Right who think they have a blank check,” Dennis Ross, a senior Middle East diplomat and veteran of the George H.W. Bush, Clinton and Obama administrations, told the Post. “I think that exuberance got their attention. I just don’t think they want any announcements that will surprise them, and they’re still in the process of formulating what their policy is going to be.
“It sounds like they want to convey a pretty blunt message,” Ross added.
The Trump administration official did not go as far as to explicitly condemn Israel’s settlement activity as “contrary to the pursuit of peace,” as the Obama administration had over the course of its tenure. But the White House does appear to believe that settlement activity, at the very least, “undermines” and complicates Trump’s efforts to bring both sides to the negotiating table.
“The United States remains committed to advancing a comprehensive final-status agreement between Israel and the Palestinians that results in two states living side-by-side in peace and security,” the official said.

The question whether he will issue a blank check for Israeli abuses against the real landlord of the Palestinian lands, has been answered.
Now, we wonder how the protesting Sheeples would react to this one, if they really understand what they are doing.

#Trump hints that federal funding could be cut after U.C. #BerkeleyRiothttps://t.co/8Y9Y5YydfT pic.twitter.com/InmzLVsN4V