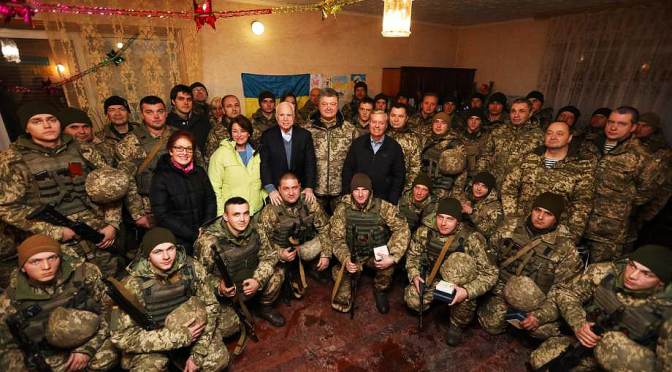 It has begun. The same formula which did work with Obama, is now being used against Donald Trump. Senators McCain and Graham are fueling a Ukrainian war with Russia to ruin the Trump presidency.
Both Senators John McCain and Lindsey Graham just went to Ukraine recently to deliver some rousing speeches to restart the long suspended battle between Ukrainian soldiers and Vladimir Putin’s.
In the recent past, the ever cooperative Nazi puppet Poroshenko has been instigating for conflict with Russia by sending a number of covert operatives to sow terror in the Crimean Peninsula.

Vladimir Rodzianko
Donald Trump’s Ambassador to the United Nations, former South Carolina governor Nikki Haley used her first appearance before the UN Security Council to condemn Russia for the renewed violence in eastern Ukraine.
What were the “aggressive actions of Russia”? She did not say. Does she accuse Russia of another “invasion” of Ukraine, as Obama’s mouthpieces endlessly claimed without proof? What exactly did she mean?
But things got even stranger…

Haley went on to tell the Security Council that US sanctions on Russia would not be lifted until Crimea returned to Ukraine – contrary to what her boss (POTUS Trump) has said in the past.
While Ambassador Haley blames the Russians for the renewed fighting in eastern Ukraine, the real cause is coming from two usual suspects – two Republican Senators to be more exact.
Fighting in eastern Ukraine began flaring up again shortly after a New Year’s Day visit to the front lines by non other than Senators John McCain and Lindsey Graham, where the two Senators encouraged the Kiev forces to renew their war against the Donbass.
Below is a video from that New Year’s trip of McCain and Graham, shown encouraging the Ukrainian troops to attack the Russians…

The Duran’s Peter Lavelle calls the recent moves by US Ambassador to the UN, John McCain and Lindsey Graham as an opening bid and a great gambit against the major global players – and to see where everyone stands when the dust settles.

You will win this war not because of US equipment, but with your sheer bravery.” – Sen. John McCain

We’re not sure if we could supply you with arms, now that Trump is in the White House, but we can try. Just blow up some things, here and there, and bring home the body bags.
Our media will do the rest.
Update: The Kiev military is already shelling Donetsk for days.

Locals in Donetsk clear debris after days of shelling (EXCLUSIVE)

The eastern Ukrainian city of Donetsk is dealing with extensive damage done by days-long shelling. RT travelled to the city to find out about the plight of the locals.
“We first heard a huge explosion. Half of the windows were blown out,” one man says.
“Within an hour we heard a second explosion, which broke the rest of windows. We rushed out into the corridor. When we returned later we found several bits of shrapnel in our rooms,” he adds.
RT’s Murad Gazdiev, who is in the embattled Donetsk, says that “you can literally feel the explosions through vibrations and tremors they cause every few seconds.” A particularly large blast caused all the car alarms to go off in the city.
The scale of damage is harrowing: five schools, two kindergartens, shops, a lot of homes were hit, Gazdiev says, citing local authorities.
“Everything is broken… I was so lucky not to be home at the time of the shelling… My bed was here…” an elderly woman says.
Reconstruction and repairs are underway in Donetsk, and OSCE monitors are at the scene, cataloguing the damage.
The humanitarian plight of the locals is not the only thing that worries the monitors.
“The mission is recording forbidden weapons on both sides of the conflict line in areas where they shouldn’t be. The consistent fighting has led to critical infrastructure such as electrical grids, gas pipelines, water pipelines, have been interrupted and destroyed. The town of Avdeevka is out of electricity for the good part of the last five days,” Alexander Hug, who heads the mission, told RT.
Winter is also taking its toll, Hug said.
“The temperatures here are still… 10 minus, and civilians suffer.”
It comes a couple of days after a BBC correspondent working in the area reported on Ukrainian tanks in residential areas in Avdeevka.

We met Ukrainian troops and tanks in #Avdiivka who seemed ready for action – and we could hear that there is no ceasefire here #Ukraine pic.twitter.com/9HGDrNAkWJ

The OSCE condemned the step as a violation of the Minsk agreement, while the Ukrainian military in the Donbass region vehemently denied that any tanks were in Avdeevka.
The conflict in eastern Ukraine started three years ago, when people in the Donetsk and Lugansk regions rejected the coup in Kiev which saw then-President Viktor Yanukovich ousted, and fighting between local militias and the Ukrainian military ensued. The conflict has claimed more than 10,000 lives so far.
The Minsk peace accords were signed two years ago by the leaders of Russia, Ukraine, Germany, and France, and called for a full ceasefire from both sides of the conflict, as well as the withdrawal of heavy weapons. Another key point was the constant monitoring of the situation by international observers on the ground.