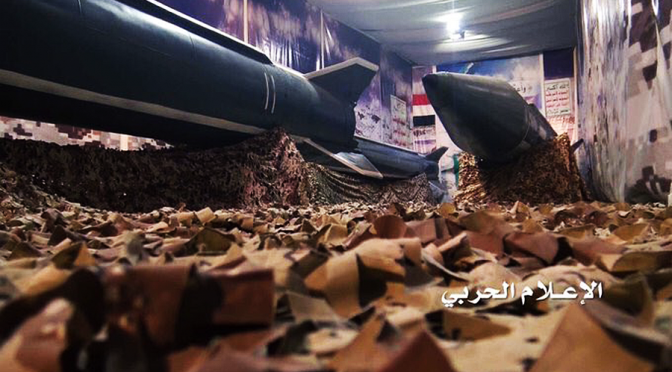 In a strong warning that Riyadh is within reach of their missiles, the Yemeni Army just dropped one in a Saudi military camp, 40 kms. away from the Saudi capital.
This is in retaliation to the almost two years of incessant pounding of Yemen using cluster bombs and a suspected tactical nuke at one time, which claimed the lives of over 11,400 to date, including women and children.
The Saudi military is using bombs supplied by the US and UK.

The following is confirmation of the missile strike from Yemen’s Ministry of Defense in Sanaa:
Translation as follows:
“Yemen Republic
Date 6/2/2017
Important Announcement
It Starts with Koranic verse
As a retaliation for the Saudi -American dire aggression , bloody massacre and arbitrary siege imposed on Yemeni People which have caused a humanitarian crisis on large scale amid international community and UN Silence
So coming from our responsible position which is committed to this noble people ‘s choice of repelling and staving off this aggression without holding back, and from deep belief in the legitimacy of the retaliation ,and the sanctity of the principle of self-defence using all available means
So we announce for the first time the launch of the Ballistic Missile which hit a military post in the Capital of Devil Kingdom Saudi Arabia
We thank God for the gift of knowledge and patience which helped us to reach this exceptional rocket development and we assure that the capital Alryad becomes in the range of our rockets at this stage
God bless the souls of our martyrs, God heal the wounds of our injured and God grant the freedom for POW and the soldiers who are unaccounted for
Yemen Missile Force”

The statement reiterates the right of the legitimate Yemeni government and forces to retaliate against the Saudi illegitimate aggression towards the Yemeni people, endorsed by the UK, US, EU and UN. It states clearly, that these attacks will be repeated until the Saudi coalition bombing is ceased.
“The Houthi ballistic missile successfully hit a Saudi military base in Al-Muzahmiyya, southwest of Riyadh. The base is ~40km away from Riyadh”

This is huge. Houthis just stated they successfully tested a long-range ballistic missile on a military target in the Saudi capital Riyadh pic.twitter.com/rxyO2sg5dR

For important background to the Saudi war of aggression against Yemen read 21st Century Wire’s article: UN Whitewashing Saudi Coalition War Crimes and Human Rights Violations in Yemen
Back in late October, regional news outlets reported that a Yemeni missile had stuck near Saudi’s second city of Jeddah, when Yemeni army and popular forces launched a 12.5-meter-long Borkan-1 ballistic missile from Sa’ada province landing at a Saudi Airbase in Jeddah late October. Military spokesmen indicated that Riyadh would soon be in range.
This will no doubt inflame the Yemen conversation in the US, as Republicans are attempting to frame Saudi’s war on Yemen as an Iranian proxy war against Saudi Arabia, and Yemen’s current General Peoples Congress & Ansarullah (aka the “Houthis”) coalition government as a “tool of the Iranian Regime,” thus reinforcing a neoconservative and Israeli foreign policy narrative for the Persian Gulf region.
Since March 2015, Saudi Arabia has waged an illegitimate, Obama endorsed, war of aggression against its neighbor Yemen, purportedly  to reinstall its own pro-Gulf and pro-America President in Yemen, Abdrabbuh Mansour Hadi, who many regard as having no legitimacy or claim to the Presidency in Yemen.

The foothold of the Houthis in Yemen is legitimate as they represent the true sentiments of the Yemeni population.

However, this can also be seen as the Iranian standing up to the Isreal-Saudi-Qatar-US-UK Cabal, who have been lording it over against smaller and less powerful countries in the region, for decades. We don’t think that Trump would allocate time and resources to helping Saudi Arabia, as his predecessors have done.