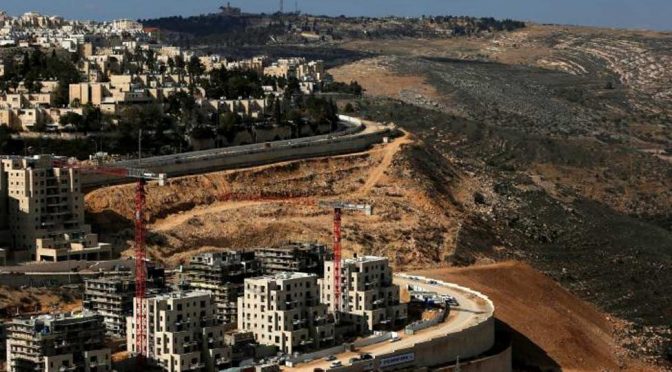 A recent Israeli law legalizing construction of settler units in the occupied Palestinian territories has drawn a wave of condemnations from across the world, with the United Nations saying the Israeli regime has crossed a ‘thick red line’.
United Nations special coordinator for the so-called Middle East peace process, Nickolay Mladenov, said on Tuesday that the legislation set a “very dangerous precedent.”
“This is the first time the Israeli Knesset (parliament) legislates in the occupied Palestinian lands and particularly on property issues,” Mladenov said, adding, “That crosses a very thick red line.”

On Monday, the Israeli parliament passed a law that would allow the regime to legally seize Palestinian private land. It would apply to 53 outposts as well as units within existing settlements, potentially legalizing over 3,800 settler units, according to the anti-settlement NGO Peace Now. Palestinian land owners would be compensated financially or with other land for their property even if they did not agree to giving it up.

“[The law] opens the potential for the full annexation of the West Bank and therefore undermines substantially the [so-called] two-state solution,” Mladenov said.
He also urged strong international condemnation of the legislation and raised the possibility of Israel’s prosecution at the International Criminal Court (ICC).
Israel ‘stealing’ Palestinian land: Arab League

Additionally on Tuesday, the Arab League (AL) accused Tel Aviv of stealing Palestinian land.
“The law in question is only a cover for stealing the land and appropriating the property of Palestinians,” said AL Secretary General Ahmed Aboul Gheit.
The law is a continuation of “Israeli policies aimed at eliminating any possibility of … the establishment of an independent Palestinian state,” he added.

Meanwhile, Jordan, a member of the Arab League that has diplomatic ties with Israel, also denounced the regime’s new land grab rule as “a provocative law likely to kill any hope of a [so-called] two-state solution.”
Jordanian Minister of State for Media Affairs Mohammad Momani said in a statement that the Israeli appropriation of Palestinian land violates the UN resolutions and international law, the official Petra news agency reported.
In December 2016, the UN Security Council adopted Resolution 2334 that described the Israeli settlements as a “flagrant violation of international law.”
Elsewhere in his statement, Momani, who also serves as the government spokesperson, warned that the legislation would “fuel the anger of Muslims and drag the region to more violence and extremism.”
Palestinian protesters wave national flags during a demonstration against the construction of Israeli settlements in the occupied West Bank near the settlement of Ma’ale Adumim on January 20, 2017. (Photo by AFP)
Additionally, Turkey took a similar position and “strongly condemned” Israeli parliament’s adoption of the contentious law and the regime’s “unacceptable” settlement activities.
The Turkish Foreign Ministry said in a statement that the Israeli law “gives approval to various settlements consisting of 4,000 units built on the private property of the Palestinians.”

Meanwhile, a pro-Palestinian Israeli NGOs said they would call on the Supreme Court to strike down the law.
Israeli opposition leader Isaac Herzog also warned that the legislation could result in the trial of regime officials at the ICC.
Separately, Israel’s Attorney General Avichai Mandelblit warned Tel Aviv that the rule may be unconstitutional and risks exposing Israel to international prosecution for war crimes.
Human Rights Watch also said the law “reflects Israel’s manifest disregard of international law” and deepens the “de facto permanent occupation” of the West Bank.
“The [US President Donald] Trump administration cannot shield them from the scrutiny of the International Criminal Court,” the UK-based rights group said.
Around half a million Israelis live in over 230 illegal settlements built illegally since the 1967 Israeli occupation of the Palestinian territories.
The presence and continued expansion of Israeli settlements has created a major obstacle for efforts to revive Israeli-Palestinian talks.

Yet, the Jews are wondering why they have been prosecuted throughout the world by those who have experienced their evil ways.