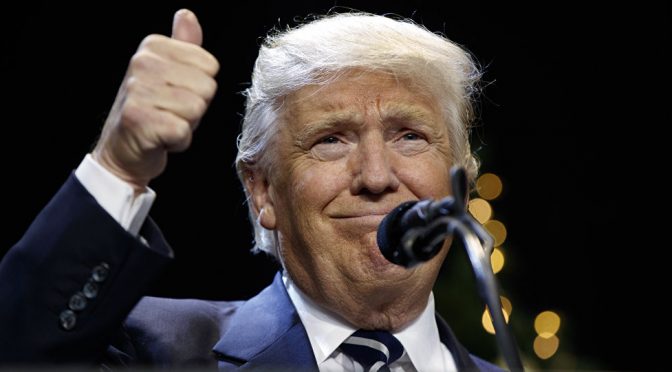 China has confirmed to have received a letter from Donald Trump where the latter spoke of his willingness to have a “constructive ties” with America’s economic rival.

This positive outreach has been preceded with a toned down military rhetoric from the US Secretary of Defense James Mattis when he said,

“At this time, we do not see any need for dramatic military moves at all.” – James Mattis, US Secretary of Defense

… during a press conference in Japan, a few days ago.
https://www.youtube.com/watch?v=yoQmmF0I47o
This sudden U-turn may surprise a lot of Trump supporters, but this is exactly what the military industrial complex doesn’t want to happen, and is the root cause of the Soros-funded protests nationwide, as the positive development would erase the possibility of a shadow war with China in the Southeast Asia region, a prerequisite for selling more weapons to Japan and South Korea.

Indeed, all of those anti-China campaign rhetorics were made only to gather some virtual bargaining chips for Trump, something that The Dealmaker could use to seek more favorable concessions from the Chinese, and he got it in time.

It’s also very hard for Trump, the businessman, to not agree with the conclusion that the primary reason why America is not so great anymore is because it has spent a lot of its resources in making war, instead of investing on its people and domestic economy.

Aside from that, Trump knows that he was right all along that it’s good for America to exercise extreme vetting on migrants rather than have an open US border for escaping Daesh terrorists from Syria and Iraq,

'Immigration Ban Is One Of Trump's Most Popular Orders So Far' pic.twitter.com/wAelwuQ4BE

… now that the US Air Force and Turkey military are working hand in hand with the Syrian Arab Army to pulverize the remaining CIA terrorists in the region.

China has in fact reiterated, on several occasions, that should war erupts, “both the US and China will lose — and both sides cannot afford that.”

China, US should steer clear of conflict as ‘neither can afford it’ – Chinese FM

Published time: 8 Feb, 2017 10:17
Both China and the US are destined to be on the losing end in a potential conflict between the countries, as the cost would be too high for each of them to bear, the Chinese foreign minister said, while downplaying Beijing’s ambitions as a global leader.

“For any sober-minded politician, they clearly recognize that there cannot be conflict between China and the United States because both will lose — and both sides cannot afford that,” Wang Yi said after being asked about the possibility of war between two counties during a press conference in Canberra, Australia, on Tuesday.
According to Wang, China does not want to lead or replace anyone, and it must focus on its own development.
“We must remain clear-headed about the various comments demanding China play a ‘leadership role’,” Wang said.

Looking ahead, it’s easy to project that once the United States is beginning to work positively with China and Russia, as it is unfolding under the Trump administration, peace will once again reign on this planet.
When there is peace, and constructive multilateral engagement among nations, everybody should have an opportunity to earn his place in the society.
It would be interesting to see China sending her railroad construction workers to the United States, one more time, not with this…

… but with this.
https://www.youtube.com/watch?v=ZzUTibbS7mU
It is therefore incumbent upon us to tell the better version of the story, instead of entertaining the mainstream doom and gloom speculations.

The fundamental truth is much simpler: Nobody wants war with anybody, unless one is involved in manufacturing arms and ammunitions for profit’s sake, and the systematic global destruction by non-Terrans.