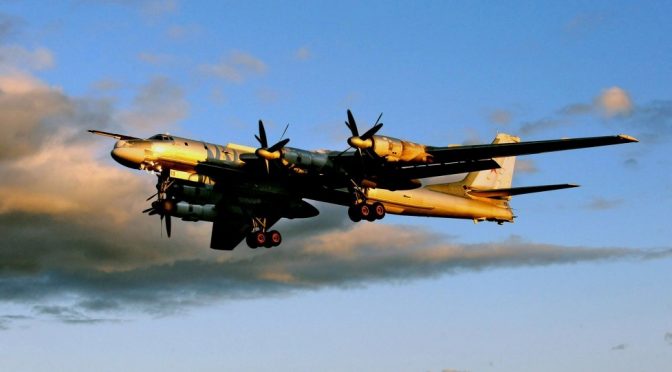 Putin is known for his resoluteness of purpose such that he doesn’t allow fake news media distraction to deter him from finishing off the task of saving Syria from the geopolitical ambitions of the Western-based Deep State.
After the successful recovery operations in Aleppo, Russia has started dropping cruise missiles to the city of Raqqa, the last stronghold of the Deep State-organized terror organization, e.g. Al Nusra, Daesh ISIS/ISIL.

Alexander Mercouris Editor-in-Chief at The Duran The Russian Defence Ministry has confirmed that Russian TU95MS strategic bombers have launched advanced Kh-101 cruise missiles on ISIS positions near ISIS’s Syrian “capital” of Raqqa.
These reports come shortly after reports that the Syrian army is now at the gates of Palmyra, having stormed earlier today the Al-Kalaabiyah Farms in the western groves of Al-Bayarat, within a short distance of the city, and that the Kurdish militia is pressing forward with its attack on Raqqa.
The Russian Defence Ministry report confirming news of the cruise missile strike reads as follows
On February 17, 2017, the Tu-95MS strategic bombers, flying from the Russian territory through the airspace of Iran and Iraq, attacked the ISIL (former name of the Islamic State terror group outlawed in Russia) facilities near the Syrian city of Raqqa with the Kh-101 cruise missiles. The targets included militant camps and training centers as well as a command center of one of the major ISIL units
The deployment by the Russians of strategic TU95MS bombers with their advanced cruise missiles represents a major escalation of their air campaign against ISIS.  The Russians have not carried out bombing raids in Syria with strategic bombers like the TU95MS for almost a year.

The strikes have been carried out by brand new X-101 cruise missiles.

The long-range bombers that took off from a Russian airfield flew over Iraq and Iran. After launching cruise missile strikes on Daesh targets, the bombers returned to Russia.
“Su-30SM and Su-35S provided air cover to the Russian bombers from the Hmeymim airbase.”
Meanwhile, the Pentagon said that Russian and US-led coalition’s militaries used mechanism on safety of flights over Syria to avoid any incidents near Raqqa, where the coalition is also conducting airstrikes.

De-confliction of air ops w/Russia continue. Today they conducted ops in vicinity of #Raqqah. So did @CJTF-OIR.

The City of Raqqa is the last major stronghold of the terrorists. It is estimated that once this city is recovered, the leadership of the Daesh terror organization will have no choice but to seek refuge in a third country, e.g. Saudi Arabia, or Qatar.
Compared to the US and NATO military interventions, the Russians are trying to leave Syria as soon as possible, but in a better position than when the intervention started. They have rendered full humanitarian services which did not make it to the Western media.

Massive demining, tons of food, shelter and medicine deliveries, mobile medical services, and now the retraining of its armed forces.

TEHRAN (FNA)- The Russian military advisors in Syria kicked off the long process of rebuilding the Syrian Army troops after almost 6 years of war on terrorists across the country. 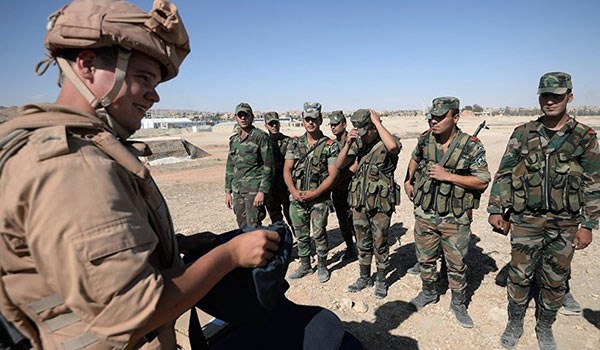 Russian military advisors started training hundreds of Syrian Army recruits in the Qalamoun mountains, as part of the first stage of the rebuilding process.
Engineering and infantry units of the Syrian Army were the first group in Damascus province that took part in the rebuilding process, while other training sessions were done in different regions of Syria.
The Russian Armed Forces’ Demining Center disclosed late in January that it established a base center in Aleppo to train Syrian soldiers to form new engineering units.
Head of the Russian Demining Center Igor Mikhailic said that the best soldiers of the Syrian Army would be trained in the newly-stablished demining center in Aleppo.

He added that the newly-established base would train between 50 up to 70 Syrian soldiers in each phase.
Mikhailic went on to say that new engineering units of the Syrian Army would be formed at the end of each training course.
These new engineering units would be tasked with demining operations in Aleppo and other regions that were freed from terrorists, he added.
Mikhailic pointed out that sappers were involved in a great job in Aleppo, disclosing that the sappers discovered a large depot of guided and anti-tank missiles in one of the neighborhoods of Aleppo.
The Russian government deployed the country’s military forces known as Russian Police to Aleppo after the city’s liberation, to shoulder responsibility of maintaining security of soldiers, sappers and Russian medical teams in the region.

It’s no surprise then that they’ve won the admiration of the Syrian people.
https://www.youtube.com/watch?v=6PEzqc7kUQA

While there’s no real, on-the-ground mainstream media coverage of the positive developments in Syria, some independent journalists and non-government organizations are more than happy to oblige.
https://youtu.be/zEn6iNzJKik
The underlying motivation to ignore Syria is due to the fact that Russia has been so successful in repelling the Western Deep State terror mercenaries there, which made the Libya-like plunder very impossible this time around.

So, anything that has to do with Russia must be evil, even Trump’s “America First” efforts are all bad because he likes Putin too much.