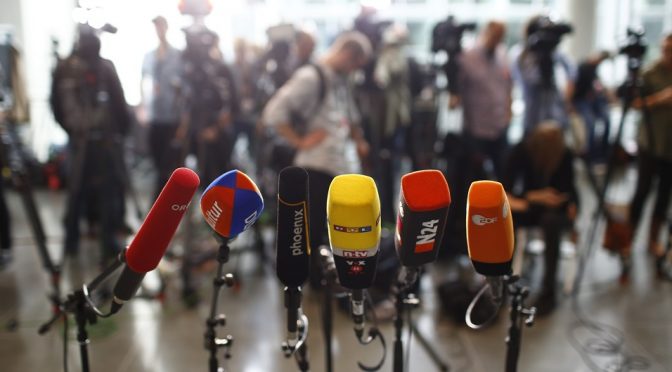 We need to understand, and so does President Trump, that the hoax “war on terror” was used to transform intelligence agencies, such as the NSA and CIA, and criminal investigative agencies, such as the FBI, into Gestapo secret police agencies.
Trump is now threatened by these agencies, because he rejects the neoconservative’s agenda of US world hegemony that supports the gigantic military/security annual budget.
Our secret police agencies are busy at work planting “intelligence” among the presstitute media that Trump is compromised by “Russian connections” and is a security threat to the United States. The plan is to make a case in the media, as was done against President Nixon, and to force Trump from office. To openly take on a newly elected president is an act of extraordinary audacity that implies enormous confidence, or else desperation, on the part of the police state agencies.
Here you can see CNN openly cooperating with the CIA in treating wild and irresponsible speculation that Trump is under Russian influence as if it is an established fact.
https://youtu.be/h1otcul-rrk

The “evidence” provided by CNN and the CIA is a “report” by the New York Times that, with little doubt, was planted in the NYT by the CIA.
This is so obvious that it is clear that CNN and the CIA regard the American people as so gullible as to be completely stupid.
Glenn Greenwald explains to Amy Goodman that the CIA is after Trump, because Trump’s announced policy of reducing the dangerous tensions with Russia conflicts with the military/security complex’s need for a major enemy.

“The deep state, although there’s no precise or scientific definition, generally refers to the agencies in Washington that are permanent power factions. They stay and exercise power even as presidents who are elected come and go. They typically exercise their power in secret, in the dark, and so they’re barely subject to democratic accountability, if they’re subject to it at all.
It’s agencies like the CIA, the NSA and the other intelligence agencies, that are essentially designed to disseminate disinformation and deceit and propaganda, and have a long history of doing not only that, but also have a long history of the world’s worst war crimes, atrocities and death squads.
This is who not just people like Bill Kristol, but lots of Democrats are placing their faith in, are trying to empower, are cheering for as they exert power separate and apart from—in fact, in opposition to—the political officials to whom they’re supposed to be subordinate.
“And you go—this is not just about Russia. You go all the way back to the campaign, and what you saw was that leading members of the intelligence community, including Mike Morell, who was the acting CIA chief under President Obama, and Michael Hayden, who ran both the CIA and the NSA under George W. Bush, were very outspoken supporters of Hillary Clinton.
In fact, Michael Morell went to The New York Times, and Michael Hayden went to The Washington Post, during the campaign to praise Hillary Clinton and to say that Donald Trump had become a recruit of Russia. The CIA and the intelligence community were vehemently in support of Clinton and vehemently opposed to Trump, from the beginning. And the reason was, was because they liked Hillary Clinton’s policies better than they liked Donald Trump’s.
One of the main priorities of the CIA for the last five years has been a proxy war in Syria, designed to achieve regime change with the Assad regime. Hillary Clinton was not only for that, she was critical of Obama for not allowing it to go further, and wanted to impose a no-fly zone in Syria and confront the Russians.
Donald Trump took exactly the opposite view. He said we shouldn’t care who rules Syria; we should allow the Russians, and even help the Russians, kill ISIS and al-Qaeda and other people in Syria.
So, Trump’s agenda that he ran on was completely antithetical to what the CIA wanted. Clinton’s was exactly what the CIA wanted, and so they were behind her. And so, they’ve been trying to undermine Trump for many months throughout the election. And now that he won, they are not just undermining him with leaks, but actively subverting him.
There’s claims that they’re withholding information from him, on the grounds that they don’t think he should have it and can be trusted with it. They are empowering themselves to enact policy.
“Now, I happen to think that the Trump presidency is extremely dangerous. You just listed off in your news—in your newscast that led the show, many reasons.
They want to dismantle the environment. They want to eliminate the safety net. They want to empower billionaires. They want to enact bigoted policies against Muslims and immigrants and so many others. And it is important to resist them. And there are lots of really great ways to resist them, such as getting courts to restrain them, citizen activism and, most important of all, having the Democratic Party engage in self-critique to ask itself how it can be a more effective political force in the United States after it has collapsed on all levels.
That isn’t what this resistance is now doing. What they’re doing instead is trying to take maybe the only faction worse than Donald Trump, which is the deep state, the CIA, with its histories of atrocities, and say they ought to almost engage in like a soft coup, where they take the elected president and prevent him from enacting his policies. And I think it is extremely dangerous to do that.
Even if you’re somebody who believes that both the CIA and the deep state, on the one hand, and the Trump presidency, on the other, are extremely dangerous, as I do, there’s a huge difference between the two, which is that Trump was democratically elected and is subject to democratic controls, as these courts just demonstrated and as the media is showing, as citizens are proving. But on the other hand, the CIA was elected by nobody.
They’re barely subject to democratic controls at all. And so, to urge that the CIA and the intelligence community empower itself to undermine the elected branches of government is insanity. That is a prescription for destroying democracy overnight in the name of saving it. And yet that’s what so many, not just neocons, but the neocons’ allies in the Democratic Party, are now urging and cheering. And it’s incredibly warped and dangerous to watch them do that.”

The United States is now in the extraordinary situation that the liberal/progressive/left is allied with the deep state against democracy. The liberal/progressive/left are lobbying for the impeachment of a president who has committed no impeachable offense. The neoconservatives have stated their preference for a deep state coup against democracy. The media obliges with a constant barrage of lies, innuendos and disinformation. The insouciant American public sits there sucking its thumb.
What can Trump do? He can clean out the intelligence agencies and terminate their license granted by Bush and Obama to conduct unconstitutional activities. He can use anti-trust to breakup the media conglomerates that Clinton allowed to form. If Bush and Obama can on their own authority subject US citizens to indefinite detention without due process and if Obama can murder suspect US citizens without due process of law, Trump can use anti-trust law to break up the media conglomerates that speak with one voice against him.
At this point Trump has no alternative but to fight. He can take down the secret police agencies and the presstitute media conglomerates, or they will take him down. Dismissing Flynn was the worse thing to do. He should have kept Flynn and fired the “leakers” who are actively using disinformation against him. The NSA would have to know who the leakers are. Trump should clean out the corrupt NSA management and install officials who will identify the leakers. Then Trump should prosecute the leakers to the full extent of the law.
No president can survive secret police agencies determined to destroy him. If Trump’s advisers don’t know this, Trump desperately needs new advisers.

Dr. Paul Craig Roberts was Assistant Secretary of the Treasury for Economic Policy and associate editor of the Wall Street Journal. He was columnist for Business Week, Scripps Howard News Service, and Creators Syndicate. He has had many university appointments. His internet columns have attracted a worldwide following. Roberts’ latest books are The Failure of Laissez Faire Capitalism and Economic Dissolution of the West, How America Was Lost, and The Neoconservative Threat to World Order.