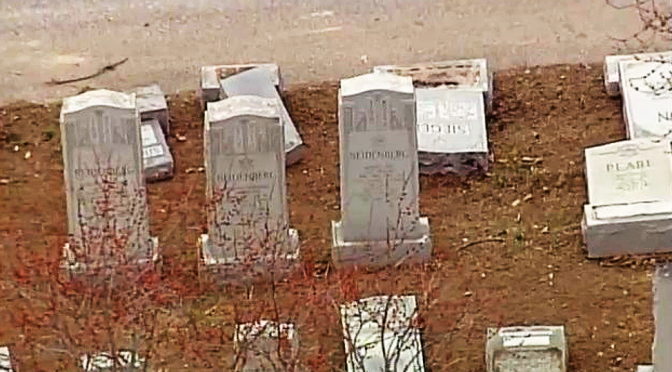 The majority of the people around the world has the capacity to show respect for different cultures. However, there’s a small segment of our societies which sought to capitalize on this cultural diversity to sow conflict between us.
Institutionalized tribalism, like what is being practiced in Israel, has been sowing the seeds for more violence against the minority of Palestinians in the Rothschild acquired territory, while encouraging animosity from the displaced people around it.

Yesterday, an Israeli soldier got sentenced to 18 months in prison for shooting a wounded Palestinian to death. His family is still protesting about the “severity” of the punishment, while the murderer himself couldn’t help but laugh about the whole absurdity…

This institutional condonation of capital crimes by the Israeli government is one of the main reasons why the Jews are overtly, or covertly, hated everywhere.

Whether this recent desecration of a Jewish cemetery is just another false flag operation by MOSSAD agents trying to gain sympathy from the American people, or to solicit a more preferential treatment from the Trump government, or not, still the basic causes of hatred against the Jewish community remain:

This is not to ignore the fact that “Ashkenazi Jews are war-like Khazarians which came from Ukraine. Palestinians are the original Israelites which the Jews are driving out from their native homeland.”

“It is well known that, sometime in the eighth to ninth centuries, the Khazars, a warlike Turkic people, converted to Judaism and ruled over a vast domain in what became southern Russia and Ukraine. What happened to them after the Russians destroyed that empire around the eleventh century has been a mystery. Many have speculated that the Khazars became the ancestors of Ashkenazi Jews.”

It was revealed that those who are backing the AshkeNazi coup in Ukraine are Khazarian Jews in Israel to effect the secret plan for the Jews’ reverse migration to where they originally came from.

This genetic origin explains why Rabbis condemn Israeli aggression against the Palestinians in Gaza.

Considering all of the above historical and recent offensives, the Muslim community still has the capacity for human decency by correcting the mistakes of the anti-Semitics in our midst.

Published time: 22 Feb, 2017 04:02Edited time: 22 Feb, 2017 07:20
Two prominent Muslim activists banded together to raise more than $30,000 for repairs of a toppled Jewish cemetery. Vandals damaged over 150 tombstones at the Chesed Shel Emeth Cemetery in University City, Missouri.
The suburban St. Louis cemetery was vandalized late Sunday or early Monday and discovered Monday morning. But by the end of Tuesday, a fundraiser started by Linda Sarsour and Tarek El-Messidi raised over $31,000 to repair it, surpassing its goal of $20,000.
The damages to the cemetery came following heightened concerns over hate crimes in the US. There have already been 12 reported bomb threats to Jewish community centers and late last month, a mosque in Texas was burned down.

“This is really a human issue,” El-Messidi told the Washington Post. “But out of this horrible election cycle, something beautiful has come out of it and [Muslims and Jews have] bonded together to support each other and stand up to this hate. Politics can get in the way of our basic humanity, I hope this breaks through all those walls, no pun intended, to help bring us closer together.”
Sarsour and El-Messidi are two increasingly influential activists for the Muslim community. Sarsour is credited with organizing the Women’s March, which had an international turnout of millions of people last month.

This isn’t the first time El-Messidi of Knoxville, Tennessee, has organized a successful crowdfunding campaign. In December 2015, he raised over $215,000 for the victims and families of victims in the San Bernardino shooting and also called on Muslims to write condolence letters to the family of Ambassador Chris Stevens, who was killed in the 2012 Benghazi attack. Stevens’ sister was presented with 8,000 letters that Thanksgiving, the Washington Post reported.

Again, we are not discounting the possibility of an organized “hate campaign” by MOSSAD agents, to push the Trump administration a bit more to the One-State solution for Israel.

Or, to sabotage the unpredictable Trump regime outright.
The real and lasting solution is to give justice to the offended, i.e. the return of Palestine to Palestinians, and to look for a place which has the capacity to host and is ready to welcome the Ashkenazi Jews with open arms like Denmark Queen’s Greenland, or elsewhere in Antarctica.

The alternative, of course, is more costly and contentious.

Paying Israel’s West Bank settlers to give up their homes for a future Palestinian state would cost about $10 billion, a peace group said. Settlers said today that the final price could be double that.
Assuming Israel would have to move about 100,000 people if a peace accord is reached, the organization, Blue White Future, estimates that compensation of $400,000 would be needed for each of 25,000 households, Co-Chairman Gilead Sher said. Fifty percent of those affected would move voluntarily, while about 40 percent would refuse, the group said, based on survey findings presented yesterday.

6 thoughts on “When Muslims & Non-Zionist Israelis Act vs. Tribalism & Hate”