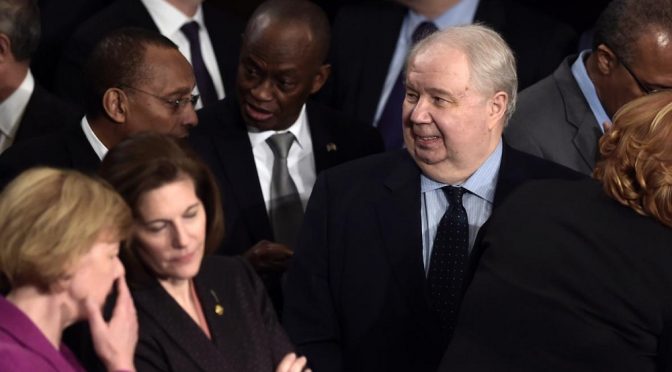 Though now billed as a “spymaster,” Russian Ambassador Kislyak was well known as a social butterfly, meeting a wide range of Americans, including politicians, academics and activists, which led David Swanson to this “confession.”
By David Swanson
It was August 2014. Our secret and nefarious meeting had to be disguised as a public event. So, the Russian Ambassador to the United States, Sergey Ivanovich Kislyak, spoke at the University of Virginia, in an event organized by the Center for Politics, which no doubt has video of the proceedings and was of course in on the conspiracy.

Kislyak was once ambassador to Belgium and to NATO. He served an eight-course Russian dinner for select guests prior to the public forum in an underground lair deep inside Observatory Hill.
Kislyak spoke to a packed auditorium at UVA and took, I think, well over an hour of questions. He spoke frankly, and the questions he was asked by students, professors, and other participants were polite and for the most part far more intelligent than he would have been asked on, for example, Meet the Press.
He told the audience that Russia had known there were no WMDs in Iraq, and had known that attacking Iraq would bring “great difficulties” to that country. “And look what is happening today,” he said. He made the same comment about Libya. He spoke of the U.S. and Russia working together to successfully remove chemical weapons from the Syrian government. But he warned against attacking Syria now.
There will be no new Cold War, Kislyak said, but there is now a greater divide in some ways than during the Cold War. Back then, he said, the U.S. Congress sent delegations over to meet with legislators, and the Supreme Court likewise. Now there is no contact. It’s easy in the U.S. to be anti-Russian, he said, and hard to defend Russia. He complained about U.S. economic sanctions against Russia intended to “suffocate” Russian agriculture.
Asked about “annexing” Crimea, Kislyak rejected that characterization, pointed to the armed overthrow of the Ukrainian government and insisted that Kiev must stop bombing its own people and instead talk about federalism within Ukraine.
There were remarkably few questions put to the ambassador that seemed informed by U.S. television “news.” One was from a politics professor who insisted that Kislyak assign blame to Russia over Ukraine. Kislyak didn’t.
Swanson’s ‘Contact’
I always sit in the back, thinking I might leave, but Kislyak was only taking questions from the front. So I moved up and was finally called on for the last question of the evening. For an hour and a half, Kislyak had addressed war and peace and Russian-U.S. relations, but he’d never blamed the U.S. for anything in Ukraine any more than Russia. No one had uttered the word “NATO.”

So I pointed out the then upcoming NATO protests. I recalled the history of Russia being told that NATO would not expand eastward. I asked Kislyak whether NATO ought to be disbanded.
The ambassador said that he had been the first Russian to “present his credentials” to NATO, and that he had “overestimated” NATO’s ability to work with Russia. He’d been disappointed by NATO actions in Serbia, he said, and Libya, by the expansion eastward, by NATO pressure on Ukraine and Poland, and by the pretense that Russia might be about to attack Poland.
“We were promised,” Kislyak said, that NATO would not expand eastward at all upon the reunification of Germany. “And now look.” NATO has declared that Ukraine and Georgia will join NATO, Kislyak pointed out, and NATO says this even while a majority of the people in Ukraine say they’re opposed.
The ambassador used the word “disappointed” a few times.
“We’ll have to take measures to assure our defense,” he said, “but we would have preferred to build on a situation with decreased presence and decreased readiness.”
Wouldn’t we all. I mean, all of us who aren’t interested in risking World War III as long as it can gin up a pretense that Hillary Clinton lost because of Russian evil.

David Swanson is an author, activist, journalist, and radio host. He is director of WorldBeyondWar.org and campaign coordinator for RootsAction.org. Swanson’s books include War Is A Lie. He blogs at DavidSwanson.org and WarIsACrime.org. He hosts Talk Nation Radio. He is a 2015, 2016, 2017 Nobel Peace Prize Nominee. Follow him on Twitter: @davidcnswanson and FaceBook. [This story previously appeared at http://davidswanson.org/node/5468]