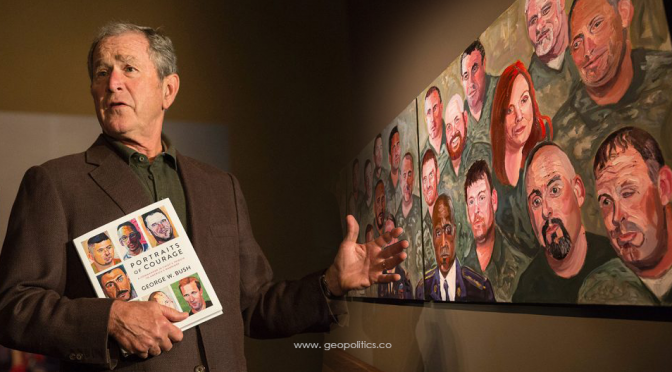 In their desperate move to topple the 40-day old Trump government, the butcher of Iraq and Afghanistan has just been resurrected by his fellow warmongering asshats in the mainstream fake news media.
He is now painted as a wise statesman holding an innocent brush of oil paint to scribble around for an elaborate makeover of the blood-soaked Bush dynasty.
In an interview to promote his book “Portraits of Courage” at NBC Today, George W. Bush Jr. asserted that a “free media was needed to call those in power to account,” a very good material for an anti-Trump smear campaign.

But who actually owns the media, Mr. Butcher, so we can be assured of its objectivity? Isn’t that the media is working for the same criminal cabal that you are a member, too?
Bush also underscores the need for Trump to answer the allegations that he has ties with Russia.
Didn’t you have a cozy relationship with the Talibans prior to the WTC 9/11 attacks?
How about Mr. Butcher’s ties with Osama Bin Laden himself?
Should we demand that he comes clean, too, with his strong ties to Saudi prince Bandar Bush, and Osama Bin Laden’s CIA connection? 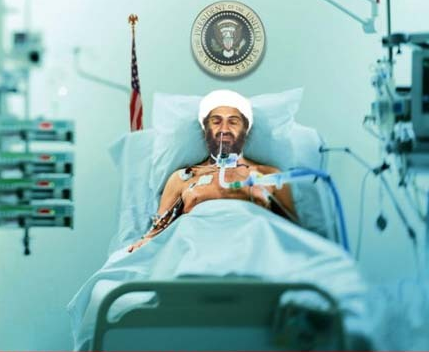 CIA agent alleged to have met Bin Laden in July

French report claims terrorist leader stayed in Dubai hospital…
Two months before September 11 Osama bin Laden flew to Dubai for 10 days for treatment at the American hospital, where he was visited by the local CIA agent, according to the French newspaper Le Figaro.
The disclosures are known to come from French intelligence which is keen to reveal the ambiguous role of the CIA, and to restrain Washington from extending the war to Iraq and elsewhere.
Bin Laden is reported to have arrived in Dubai on July 4 from Quetta in Pakistan with his own personal doctor, nurse and four bodyguards, to be treated in the urology department. While there he was visited by several members of his family and Saudi personalities, and the CIA.
The CIA chief was seen in the lift, on his way to see Bin Laden, and later, it is alleged, boasted to friends about his contact. He was recalled to Washington soon afterwards.
Intelligence sources say that another CIA agent was also present; and that Bin Laden was also visited by Prince Turki al Faisal, then head of Saudi intelligence, who had long had links with the Taliban, and Bin Laden. Soon afterwards Turki resigned, and more recently he has publicly attacked him in an open letter: “You are a rotten seed, like the son of Noah”.

https://www.youtube.com/watch?v=rxiNYUFIiJ4
The above documentary was made by one Michael Moore, who actively campaign for another war criminal ,Hillary Clinton, in an effort to limit the options to a narrow set of preselected candidates.
Bin Laden died of kidney failure long before Obama staged his own cinematic covert operation inside Pakistan, which led to the permanent silencing of Seal Team 6.
Much like Benazir Bhutto was assassinated for telling the world that Osama died sometime in 2001.
https://www.youtube.com/watch?v=9RHEqWp8TWo
The minimum objective of this latest George Bush acrobatics is to recognize the contribution of the veterans to their War of Terror and placate the latter’s animosity to his tenure which saw the murder of more than a million Iraqis, and the further erosion of everyone’s privacy.
That’s how they pay a token of their appreciation to the thousands of US soldiers who died during the Desert Shield and Desert Storm operations, while they laugh behind the soldiers’ back at the stupidity of the uniformed personnel, i.e. when they obey those illegal orders first before they start questioning them.

Obviously, Trump is slowly gaining the loyalty of the military as he panders to them with capability and equipment upgrade.
https://www.youtube.com/watch?v=S4MAjNfqVZk&t=620s
The Cabal wants to degrade the gains from these proactive efforts by the Trump government, the same tactic which is being effectively used by Philippine President Duterte.

He should replicate this effort all throughout the country instead of speaking in front of CIA holdovers.
The bigger picture, of course, is that this effort to recycle ex-presidents cum puppets is a blatant sign that the Khazarian Mafia is running out of ammunition to undo the rising tide of global awakening against their false and made-up reality which allowed them to act with total impunity against peace-loving people around the world.
Likewise, those who have advertised themselves to be running after these shenanigans are not really doing anything except to fool the global resistance movement with weekly false hopes.
The future of humanity still rest in the hands of ordinary people like you and me.