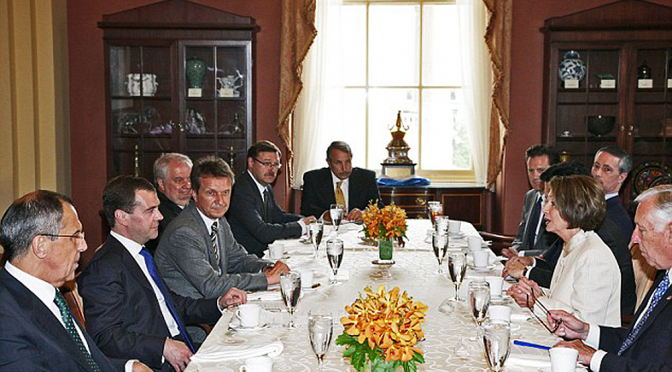 Both Nancy Pelosi and Chuck Schumer’s hypocrisy has just been revealed. They are also caught talking to evil Russians over a cup of coffee.

We should start an immediate investigation into @SenSchumer and his ties to Russia and Putin. A total hypocrite! pic.twitter.com/Ik3yqjHzsA

I hereby demand a second investigation, after Schumer, of Pelosi for her close ties to Russia, and lying about it. https://t.co/ZLTxCuY9qU

In fact, most of them have talked to the Russian ambassador moer than once during their term…

Democrats were aghast after learning Attorney General Jeff Sessions met twice, as a senator, with Russia’s ambassador to the U.S. without telling Congress at his confirmation hearing – but it turns out Sergey Kislyak is no stranger to lawmakers on both sides of the aisle.
The longtime Russian ambassador met with seven then-Democratic senators in a single sit-down in 2013, among other discussions – and reportedly was a frequent visitor to the Obama White House.
As House Speaker Paul Ryan put it Thursday, “We meet with ambassadors all the time.”

All of the above is just the icing to the fake news cake when Hillary Clinton herself talked to Putin inside his “inner sanctum,” and more.

Indeed, even with the recent assassinations of their diplomats, the Russians couldn’t help themselves from laughing…

#Zakharova warns US ambassador about risks of talking to Russian diplomats https://t.co/3NMm6RMarD pic.twitter.com/enEPTIZUgw

… and the battle between Trump and Obama is getting nastier…

Terrible! Just found out that Obama had my "wires tapped" in Trump Tower just before the victory. Nothing found. This is McCarthyism!

How low has President Obama gone to tapp my phones during the very sacred election process. This is Nixon/Watergate. Bad (or sick) guy!