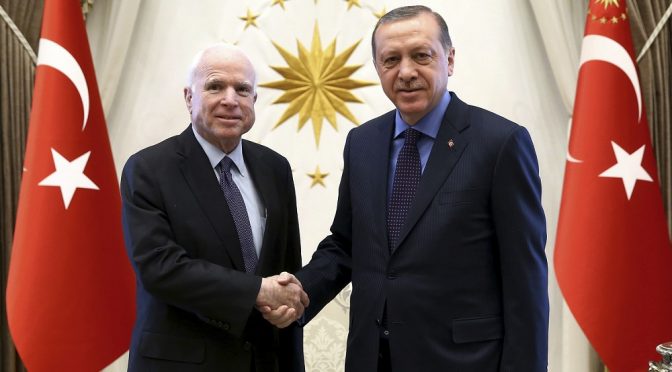 Just a matter of days after John McCain’s “unusual” trip to Syria and Turkey, the Turkish government has cut off water supplies from the Euphrates River into northern Syria, violating international conventions on water rights.
By Whitney Webb | March 3, 2017
CHILE — While some measure of stability has returned to pockets of northern Syria following the Syrian Army’s recent liberation of al-Qaeda from Aleppo and elsewhere, external forces seem determined to keep the region volatile, regardless of the cost. In the latest example of aggressive foreign intervention in Syria, Turkey, which has long played an antagonistic role in Syria’s nearly six-year-long conflict, has now cut off the flow of the Euphrates River into Syria, depriving the nation of one of its primary sources of water.
According to the Kurdish Hawar News Agency, Turkey cut water supplies to Syria around Feb. 23, which subsequently forced a hydroelectric plant at the Tishrin Dam to shut down while also significantly reducing water levels on its associated reservoir. The dam supplies both water and power to key parts of northern Syria, such as the city of Manbij and other parts of the predominantly Kurdish Kobani Canton.
The dam is one of several major dams along the Euphrates River. Just downstream from Tishrin lies the Tabqa Dam and its reservoir Lake Assad, which supplies Aleppo with most of its power and drinking water, as well as irrigation water for over 640,000 hectares (2,500 square miles) of farmland. A city official in Manbij told Hawar that the city would provide generator fuel to civilians to help cope with the blackout that has resulted from the river being cut off. The same official added that Turkey had “violated the international conventions of water and rivers energy by cutting off Euphrates water.”
This is not the first time Turkey has deprived Syrians of water as a means to advance their political goals in the region. Turkey previously cut the river off in May of 2014, causing water levels on Lake Assad to drop by over 20 feet and creating the potential for genocide by means of dehydration. By blocking the river, Turkey threatens Iraqi civilians as well. Major urban centers like Mosul, whose water supplies largely depend on reservoirs fed by the Euphrates, could be gravely impacted if the river continues to be blocked.
[googlemaps https://www.google.com/maps/embed?pb=!1m17!1m11!1m3!1d10905.460408211955!2d38.18105942997118!3d36.38027381916345!2m2!1f0!2f0!3m2!1i1024!2i768!4f13.1!3m3!1m2!1s0x1530e2e5390bf0e7%3A0xef7bb88d1442b71b!2sTishrin+Dam%2C+Syria!5e1!3m2!1sen!2sus!4v1488810725528&w=532&h=380]
The act of cutting off the river is not unprecedented, but its timing is peculiar. Just days prior to Turkey’s act, U.S. Senator John McCain “secretly” visited the Kobani Canton, the very region that now finds itself without water, before heading to Turkey, where he met with Turkish President Recep Tayyip Erdogan.  According to the senator’s office, “Senator McCain’s visit was a valuable opportunity to assess dynamic conditions on the ground in Syria and Iraq.” It adds that McCain looks forward to working with the Trump administration and military leaders “to optimize our approach” on fighting the Islamic State.
While the U.S. has backed the Kurds in their fight to keep their territories along the Syrian-Turkish border free of terrorist influence, it has come at the cost of greatly complicating diplomatic relations between the U.S. and Turkey.  For example, in early 2016, Erdogan dramatically demanded that the U.S. choose between an alliance with Turkey or with the Syrian Kurds. The diplomatic stand-off has since reached new heights of tension, with Turkey threatening to invade Kurdish-held Manbij less than two weeks ago. Manbij is suffering the most from Turkey’s blockage of the Euphrates, suggesting that the move could be intended to destabilize the Kurds before something more drastic takes place.
It also warrants mentioning that despite Erdogan’s and McCain’s claims that they are eager to “defeat” the Islamic State and other terrorist factions, both have close ties to those very same groups. This, of course, suggests that McCain’s visit, as well as recent moves by Turkey, have ulterior motives that have yet to be publicly expressed.
For example, McCain has been so intent on removing Assad from power that he has fostered relationships with the Syria’s “moderate rebels” and its more notorious opposition factions such as the Islamic State. Photographic evidence has confirmed this, with one infamous photo showing McCain posing with Khalid al-Hamad – a “moderate” rebel who gained notoriety after a video of him eating the heart of a Syrian Army soldier went viral online. McCain has also admitted meeting with ISIS on national television, going so far as to acknowledge that he is still in contact with the infamous terrorist group.

Erdogan, for his part, was revealed to be a major player in the smuggling of Islamic State oil out of Syria for sale on the global market. It was these oil sales that enabled the Islamic State to grow into what it is today and to become one of the world’s most well-funded terror groups.
With such connections now well-documented, it seems unlikely that McCain and Erdogan discussed how to defeat the Islamic State. Based on the evidence, it seems much more likely that both remain eager to destabilize the region due to their shared goal of deposing Assad. With Turkey already working to destabilize Northern Syria by cutting off key resources, we will soon see what other measures may have been discussed during this “secret” meeting.

Whitney Webb is a MintPress contributor who has written for several news organizations in both English and Spanish; her stories have been featured on True Activist, Activist Post, We Are Change and Waking Times among others – she currently resides in Southern Chile.