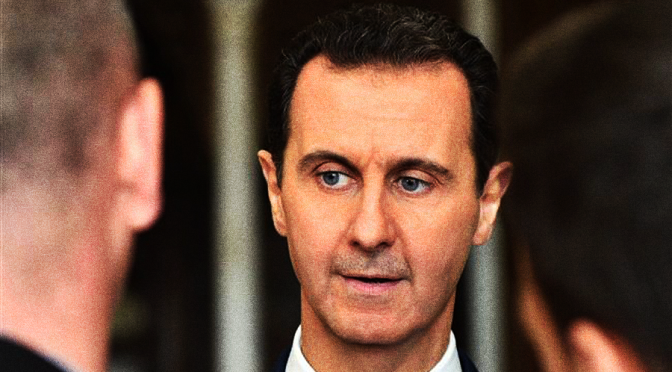 Syrian President Bashar al-Assad says many of the most brutal terror kingpins who have come to Syria during its six-year conflict originate from Europe, blaming the continent for the phenomenon.
“Many of the most savage leaders of al-Qaeda in Syria, whether ISIS or al-Nusra, are coming from Europe,”  Assad said in a statement to Western media outlets, which the official Syrian Arab News Agency carried on Monday.
ISIS is an English acronym for the Takfiri terrorist group of Daesh, which splintered from al-Qaeda in the 2000s and has been wreaking havoc in Syria over the past years. Al-Nusra Front, too, was al-Qaeda’s branch in Syria before it claimed to have broken ranks with it and rebranded itself.

“We have so many fighters from the Arabic world, but their leaders are coming mainly from Europe,”

… the Syrian president added.
The reason, he said, was that European countries had been marginalizing many people from certain echelons of the society and leaving them susceptible to inculcation by clerics preaching the radical ideology of Wahhabism.

“Especially in France…, they isolated these people and they allowed the Wahhabi clerics to come and infiltrate their mind, and this is where you are paying the price,”

… Assad said, apparently referring to the many attacks staged across Europe over the past years by home-grown terrorists.
“This [extremist] culture wasn’t part of the original culture, it’s something new that we’ve been seeing for the last few decades. Why? Because of the influence of the Wahhabi ideology that doesn’t accept any other one,” he said.

The Iranian role vs. that of Israel in Syria

“Israel, from the other side, [has been] supporting directly the terrorists, whether logistically or through direct raids on our army in the neighboring area.”

The Islamic Republic has been lending advisory support to the Syrian military in the face of terrorism. It has also been constructively contributing to the establishment of ceasefires over the country and political talks aimed at defusing the years-long conflict in the Arab country.
Israel has been carrying out air raids against Syrian-based targets on many occasions and has been offering medical treatment to the militants fighting Assad. Tel Aviv has also been entering Syrian territory to carry out spying operations.

‘Embargoes work much the same way as terror’

Assad also reflected on the drive by the United States and its Western and regional allies to support anti-Damascus militants as well as on the US-led embargoes targeting Syria.
He said the sanctions were working in tandem with the acts of the terrorists in harming the Syrian people.

“If you want to talk about the European role, or the Western role, because it’s been led by the Americans, the only role is to support the terrorists until the moment,”

… he told the European media people.