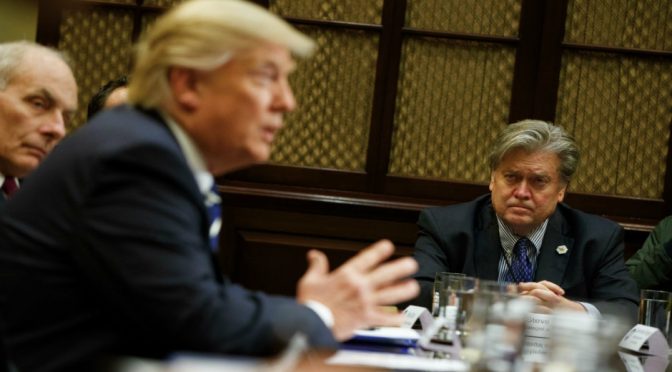 Donald Trump has put the mainstream media, and ex-President Obama, on the defensive. That’s the good news.
The bad news is: the US foreign policy remains the same as far as the movement of military assets in many regions around the world is concerned.
In fact, the same policy is even dwarfing Obama’s indecision in places like Syria, or in the immediate vicinity of Iran, China and Russia, where the Pentagon has augmented its forces by the hundreds, or thousands, of troops and equipment, depending on the location.
Just recently, the Pentagon deployed B-52 bombers, 400 airmen for Iraq and Syria campaign. But, only three days ago, Syrian President Assad had already made it clear that all those forces that were not invited to Syria are invaders.
So, why would Trump send these war materiel to Syria, South Korea, and near the Russian borders, if indeed the US president is any different than his predecessors?
Even the new US Ambassador to the UN, Nikki Haley, is still parroting the same old “Never trust Russia” song, like her predecessor Samantha Power did.
The way we see it, while Obama’s policy in Syria is to prolong the agony of the Syrians by dragging on its military operations against the CIA-trained terrorists in one hand, and dropping aerial bombs against Syrian military positions like in Idlib, which killed about 80 armed Syrian personnel and destroying critical supply infrastructures, on the other,

… the incumbent Trump administration is executing a more decisive military operations against the terrorists in Raqqa, the de facto Daesh capital in Syria, in order to gain control of some of the territory, post-Daesh.
In the process, a US-friendly Kurdish minority would be put in charge in Raqqa, or a portion thereof, when it is fully liberated from Daesh, just like what the US did in Berlin after the Russians defeated the Nazis there, sending Adolf Hitler in hiding for the rest of his life.

Whether this is what the Two Towers’ primordial goal everywhere they both go, is something that we can only speculate on, bearing in mind that the G7 countries today still continue to produce arms and ammunitions for the global consumers, even when they make antagonistic rhetorics against one another.
Another interesting point to consider is the early departure of National Security Adviser Michael Flynn which arrested a more proactive, yet peaceful reengagement with Russia.

Yet, we know that the man is fiercely anti-Iran — a staunch Russian ally in the Middle East.
Are we to believe that all of these people are not sharing the same sources of information about other countries, hence the differences of opinions about them?
Or, are they just acting from a given script which sustains the atmosphere of global conflict without really going into a full blown war, to bleed the common man out of the fruits of his toil?
Now that Mike Flynn is out of the picture, from whom does Trump get his foreign and domestic policy advice from?
Aside from the slew of military generals surrounding The Donald, it’s Steve Bannon, who is the supposed “intellectual force” behind Trump’s agenda. But…

“Steve Bannon has been propelled over the last year from fringe media outlier to top propagandist of the U.S. Empire as Trump’s Chief Strategist.
From his Wall Street roots and apocalyptic film career to his cultivation of alt-right bigots at Breitbart News, Abby Martin exposes Bannon’s true character in this explosive documentary.
Dissection of Bannon’s ideology of “economic nationalism” and desire to “Make America Great Again” reveals the danger of his hand in Trump’s agenda.” – TeleSUR

So, is the Trump administration really anti-establishment?
Just because it is standing up against the offensives of the Deep State doesn’t really mean it’s anti-establishment, because the latter is more than just a co-opted mass media and a conscripted CIA.
The military industrial complex, and the entire financial system which is very excited in seeing how its portfolio begun picking up once again, are still standing like never before. They haven’t changed management yet, no matter what we’ve heard from the grapevine.
No, the Trump administration is not purely anti-establishment. He’s just a change in approach and strategy to the growing mass awakening that has since engulfed the planet owing to the interconnectivity of the internet.
Once again, they are one step ahead, and we are mere spectators, still.
Sadly, that’s all our fault.

5 thoughts on “Is the Trump Administration Really Anti-Establishment?”