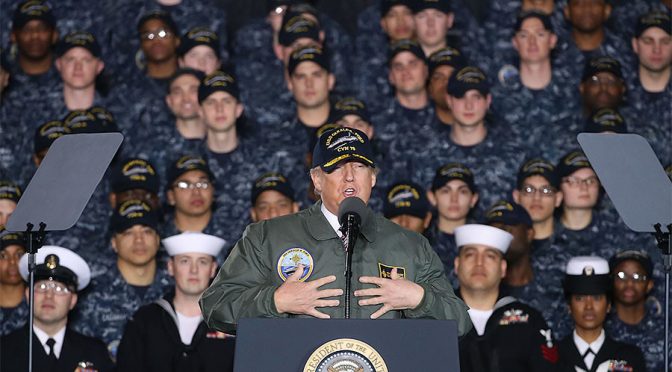 Donald Trump is celebrating his first two months in office with a militarist national budget, i.e. his first national budget outlined a $54 billion more than that of his predecessor for the military industrial complex.
The expectation was for him to use his business acumen to bring the civilian jobs back, but that would mean shouldering a portion of the cost in relocating industrial production plants, and a cheaper labor pool that is able to compete with China, India and Southeast Asia, both of which are not feasible to implement at this point within the context of an enterprise which purpose is to generate as much profit as possible.
Changing fortunes do have a way of changing principles. Not that China failed to offer a helping hand, but the American Pride needs to be accommodated, too.

Not only that they rejected this hand of peace, it is also very interesting to see how the leaderships of China are preaching the virtues of globalism in Davos and in every forum they have attended since, while the West seems to shun their own capitalist brainchild in favor of a “nationalist economy.”
That should be very laudable, yet so far, the “nationalist economy” we are seeing is actually a war economy that’s now being laid out by the purveyor of the “America First” mantra – Donald Trump himself. How did this come about?
Didn’t half of America slap the perennial warmonger Hillary Clinton last year?
What we’re seeing now is a close coordination between the liberal Democrats, the neoconservative Republicans, and the Khazarian Deep State, to pull Trump into their war-based enterprise like they’ve been doing for a long time to all populist leaderships.
Victoria Nuland’s partner in bed and in crimes, Robert Kagan, has recently published an article “Republicans are becoming Russia’s accomplices” through the Washington Post,

It would have been impossible to imagine a year ago that the Republican Party’s leaders would be effectively serving as enablers of Russian interference in this country’s political system. Yet, astonishingly, that is the role the Republican Party is playing.

… to ignite the fire of “nationalism”, i.e. sow political intrigue, to deter the president from resuming with his aborted détente with Russia, which is not a wonderful idea for the military industrial complex that lives and breathe through hot and cold wars.
Not only is Trump’s first national budget is behaving more militarist than that of his predecessors, the recent deliveries of arms and foot soldiers near the vicinity of Raqqa, Syria, falls exactly into what the Kagans and the Rubins wish Trump should do, 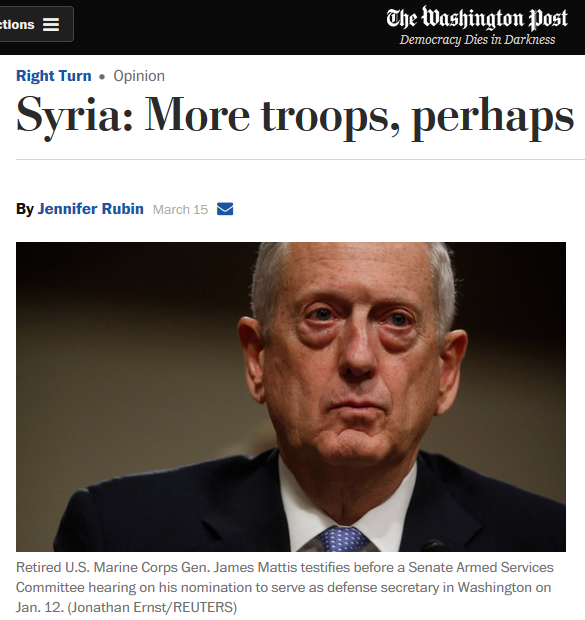 … and even suggested that in the long-term:

The key is finding new Sunni partners and taking the fight to new terrain, specifically, southeastern Syria, where ISIS leaders have refuge. American military forces will be necessary. But the U.S. can recruit new Sunni Arab partners by fighting alongside them in their land.
The goal in the beginning must be against ISIS because it controls the last areas in Syria where the U.S. can reasonably hope to find Sunni allies not yet under the influence of al Qaeda. But the aim after evicting ISIS must be to raise a Sunni Arab army that can ultimately defeat al Qaeda and help negotiate a settlement to the war.

Now, that should be a stroke of genius considering that the Daesh terrorist organization is mostly Wahhabis/Sunnis funded by Qatar and Saudi Arabia, and advised on the ground by Zionist European military and intelligence officers.
The goal in the beginning should be against their own terror army on the ground, and then negotiate a settlement to the war?
You mean: grabbing a portion of Syria?
Life is really cheap for these psychopaths. Just look at how they are conducting military operations where they have no sensitivity at all as to whoever is hit of their indiscriminate bombings, supposedly to liberate Mosul from Daesh.

Not only were there is grave failure to target the terrorists surgically, and portray an accurate account of what’s been going on the ground thereafter, there seems to be a policy than civilians lives really is not that important, nor a priority, but the accumulation of real estate inside Syria, or in Iraq.

Collateral genocide is far more accurate.
Obviously, that still fall into the “America First” mantra, but do we really need to shower civilians with bomb, or did we ever consider that if we can’t shoot straight we might as well leave the job to the more capable operators on the ground?
There are more signs that nothing has changed in Syria as far as the US intervention policy is concerned except that it is more decisive in a sense that the cap on the number of US forces on the ground is removed. But the overall goal of gaining a piece of the Syrian pie is still there, and for whose benefit?

Trump Admin Ousts UN Official to Protect Israel From Criticism: a move his own DoD Chief recognizes is dangerous https://t.co/4a9yQMfTN1

Last year, the US military budget is more than that of the next top 7 military spenders combined.

The graph above should be more than enough to conclude that the Pentagon must be protecting an empire. Which empire?
The funny thing is that, some portion of the American population profoundly believe that they are part of that empire, and can only be proud of themselves. Nothing could be farther from the truth.
The gist of the matter is: nobody wants to wage a war against anybody, except the military industrial complex and its minions. The rest of the world are thinking of more worthwhile objectives rather than participate on a useless pissing contest.

So, what really is the continued militarization of the US economy under the Trump administration exactly for?
Didn’t any of the US leaderships learn any lesson at all, until now?
Nevertheless, the American militia groups are giving The Donald their benefit of the doubt.
We can only wish them well.

3 thoughts on ““America First”… Through A War Economy?”