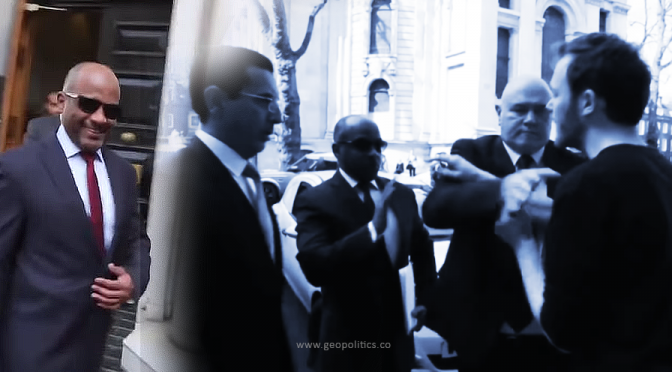 The Nazi Monarchy, having the controlling stakes in BAE Systems, Inc. and British Petroleum, is perpetrating a crime of genocide against the Yemeni population, in collusion with its loyal servant-warlord, fellow Khazarian House of Saud.
Here’s the proof that the Saudi government is under the protection of the Nazionist British Monarchy…


Footage shows activist Sam Walton attempting the arrest, claiming Asiri is a war criminal responsible for atrocities in the Yemeni conflict.
Asiri’s bodyguards blocked the attempted arrest and Walton can be heard saying “You’re interrupting a citizen’s arrest” as Asiri disappears into the building where he was due to appear at a think-tank forum.
In a statement following the incident, Walton said Asiri was the “chief apologist for the war crimes in Yemen,” claiming he was directly involved in war crimes in the country.
“Why are we allowing this war criminal to wander around the British streets when we know everyone’s condemned the war crimes in Yemen,” he said.

The moment I citizen's arrested #Saudi Major General Ahmed Asiri. He should be put on trial for war crimes in #Yemen. pic.twitter.com/fl5ADbpMGc

Saudi Gen. Asiri is the spokesperson for the Saudi-led coalition that has been waging war with the Houthi rebels using US/UK made bombs, and has been accused of killing more than 10,000 civilians and leaving millions facing acute food shortages in Yemen.
The invasion is aimed at restoring ousted Saudi puppet President Abd Rabbuh Mansour Hadi to power.

The Saudi military's chief spokesman reacts to protestors condemning his role in the destruction of Yemen. #StopArmingSaudi pic.twitter.com/wO5CX0t9J9

While we applaud the courage of those who made the attempt to arrest the war criminal Asiri, that symbolic action and shouting alone has been proven to not produce the desired result.
For people to keep resorting to such ineffective methods can only be attributed to the efficiency of the entire System of Hypnosis.
Power is never given. It can only be taken with a superior and opposite force. Yes, we do need to get our hands dirty.