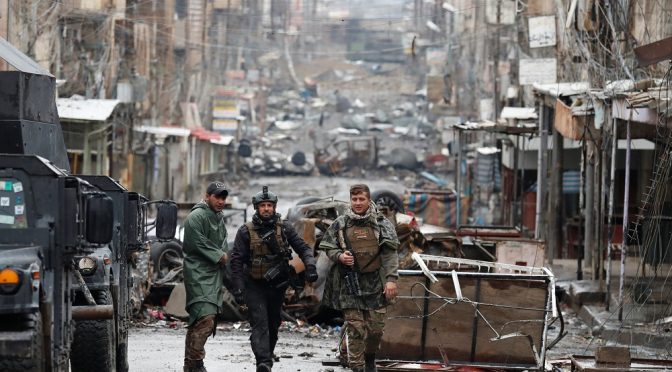 We tried to avoid, or at least postpone, it until after 6 months when we evaluate with considerable certainty what the Trump administration is all about. But the US forces’ actions in Mosul, Iraq, and in Raqqa, Syria, are persistently reckless, i.e. genocidal, by any measure.
Why is the US genocide, sold as humanitarian interventions, continuing under Trump?

That is in sharp contrast to the true surgical characteristic of Russian operations using Spetsnaz and Chechen commandos to liberate the ISIS controlled city of Aleppo.

Historical records will show that this is the unwritten policy of whoever controls the US government and its European counterparts in general, i.e. wipe out the occupied population in the name of humanitarian intervention, wherever they go.

Obviously, the list should be a lot longer. In fact, an estimated 20 million deaths were recorded since World War 2 that is all attributable to the US.
Of course, if we tried to go back 500 years ago, that figure would easily reach a hundred million for the Native Americans alone. But we are told by Vlad Putin himself how not to use “5th century” events in favor of prevailing realities.
So, this is what the US Forces are protecting in the Gulf States, i.e. a Kuwaiti employer just taking a footage of her helpless Ethiopian housemaid instead of showing some iota of humanity left from the slave drivers.

Nevertheless, the number of deaths for Iraq is yet to be updated as more civilian victims are recorded as reckless US airstrikes continue to this day.

Liberation of Mosul: A new catastrophe? 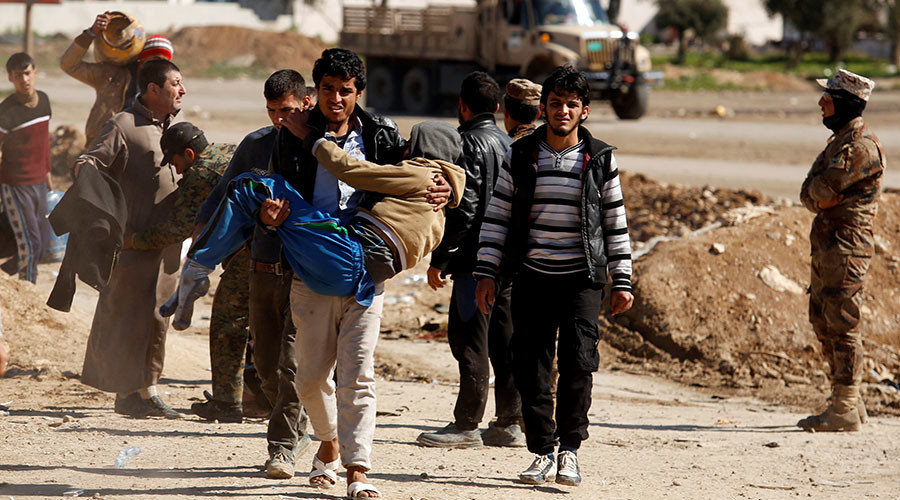 We are deeply concerned over the deteriorating plight of the civilians in Mosul, who are paying an excessively high price for their liberation from terrorists.
We have seen devastating consequences of the first phase of the military operation in the eastern districts of Mosul, where the Coalition applied doubtful tactics to push terrorists out of the city. Those efforts led to deplorable results: at least 1,500 civilians were killed and over 160,000 were displaced. During that brutal fighting about 60 percent of administrative buildings, 90 percent of transport infrastructure, 15 percent of residential buildings and 30 percent of schools were ruined.
The Karama and Aden districts were among the most heavily affected areas, where water and electricity supplies, telephone communications and TV broadcasts were completely destroyed. The health care system was paralyzed by almost total destruction of two local hospitals. All five bridges across the Tigris River were destroyed. The residents now rely entirely on humanitarian assistance, which is obviously in short supply.
A military operation in the Western districts of Mosul with more than 750,000 people has recently begun. The greater density of population questions the possibility of using aviation, artillery and armored vehicles. According to the Office of UN High Commissioner for Human Rights, at least 307 people were killed and another 273 wounded between 17 February and 22 March. The most deadly incidents occurred on 17 March, when an airstrike hit a house in al-Jadida neighborhood in western Mosul. At least 200 people, according to different estimates, are reported to have been killed by the US-led Coalition. And US Lieutenant General Stephen Townsend has confirmed publicly a role of US warplanes in this deadly raid.
We have every reason to believe that the Americans and their allies will use the same tactics of “liberation”, but in fact “mass cleanings” in other cities in Iraq and in Raqqa (Syria) as well. In Mosul there are no humanitarian corridors for the people to escape the city, no medical and humanitarian assistance to help them survive. This bears no comparison to what the Russian military did during the operation in Eastern Aleppo by stopping any sorties in and around the city and providing humanitarian exits both for civilians and fighters. Not to mention the endgame, i.e. the massive civilized evacuation of 35,000 civilians and fighters, safely transported to areas not under government control. It is also surprising to hear almost no assessments from the Western media of such unprofessional and careless approach of the Coalition in Mosul.
We call upon our partners to do everything to avoid civilian casualties.
Dr Alexander Yakovenko, Russian Ambassador to the United Kingdom of Great Britain and Northern Ireland, Deputy foreign minister (2005-2011). Follow him on Twitter @Amb_Yakovenko

When Russia was trying to liberate Aleppo, all Western mainstream media labeled it as genocide. However, we have yet to hear them talking about what’s really going on in Mosul, Raqqa, and in Yemen.

YEMEN: "Saudis, Emiratis and USA are Inflicting a War of Genocide Against Houthis ~ Prof. Francis Boyle https://t.co/RDj6OOQ9Mb via @21WIRE

What the rest of the world is experiencing from their American partners right now is the same thing that the Philippines has experienced with its “ally” in 1945.

The Americans destroyed Manila in 1945

MANILA, Philippines – It was mainly the United States’ casualty-avoidance policy that resulted in unrestrained and indiscriminate application of overwhelming firepower by forces under MacArthur, which caused the utter devastation of Manila and the loss of 100,000 Filipino lives in 1945.
The figure of 100,000 civilian deaths is a conservative estimate. Some sources cite as high as 240,000. The atomic bombing of Hiroshima and Nagasaki only killed 70,000 and 40,000, respectively. The firebombing of Dresden killed 25,000. Only the the rape of Nanking in 1937, where Japanese troops murdered 300,000 civilians, eclipses the destruction of Manila which some historians call one of the tragedies of WW2.
… For the Americans, they were willing to negotiate and compromise with the enemy if American lives were at stake. This policy did not apply to Filipino lives.

How could the US do that to their little brown brothers after the latter helped the US survive during the Great Depression in 1930s, and still is happening even today?

One can only imagine how much pressure that the incumbent Duterte government needs to deal with from the Western mining companies.

Let all of the above sink in, and then try to remember that not too long ago, we were all hoping that a change in the White House would stop all of the killings.
Haven’t we learned anything yet?
We, at the so called Third World, could not possibly make a dent on the military might of the Nazis controlling the US, but the American founding fathers have long ago put up a potent mechanism by which to counter an oppressive government — it’s called the Second Amendment.

‘A well regulated militia being necessary to the security of a free state, the right of the people to keep and bear arms shall not be infringed.”
Thomas Jefferson, the Secretary of State:[33]

Will any of the “brave Americans” grow some balls and use their shiny rifles against their own Nazi conquerors now?
Or, will they just contend themselves with their being show offs, i.e. theatrics and all…

If that’s not enough for the “American Patriots” to rise up now, then what is?
Or, has the entire American population been rendered so docile enough to even entertain the idea of a peaceful revolution, you know, that kind of movement when everyone hits the streets all over the nation, and have a picnic for a few days hoping that the embedded Nazionists just quit and leave?
Nope. That could only happen in Asia.

Hey, Joe, don’t complain about the mocking. Remember,  we have yet to complain about the genocide, and the disappearance of at least 720,000 metric tons of pure gold endemically mined in the country for centuries?
Likewise, just recall when you ridiculed the Philippines as a country of “60 million cowards and one son of a bitch” during the Marcos dictatorship. We wonder how should we call the United States of America now.

The bottomline really is: humanity has a common enemy which emanates from, and still is headquartered in, the West. The battle must be waged right there against the Oligarchy, and not anywhere else, i.e. this time around —  America First.
Trump is just another pressure valve that is being utilized to vent off excess steam, and prevent a total, catastrophic system failure.
But isn’t that exactly what the world needs?